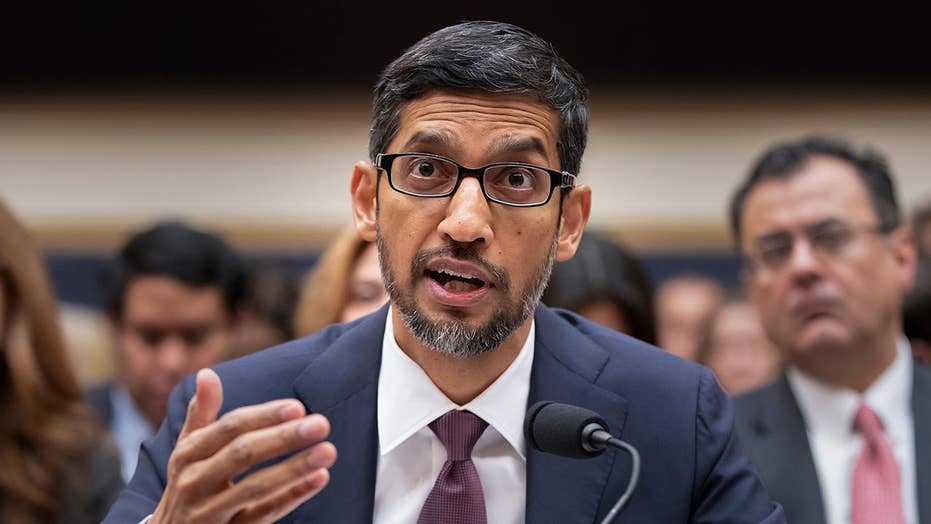 Members of the House Judiciary Committee peppered the head of Google about potential bias against conservatives and Russian influence and misinformation; Gillian Turner reports.

Google has been forced to shut down and "effectively end" its controversial China search engine project, code-named Project Dragonfly, after members of the company's privacy team raised complaints, according to a new report.

The tech giant led by CEO Sundar Pichai was forced to close a data analysis system it was using for the controversial project, according to The Intercept, citing two sources familiar with the matter. The news outlet originally broke the news that Google had been considering launching the app-based search engine.

GOOGLE HAS NO PLANS TO LAUNCH SEARCH IN CHINA, PICHAI SAYS

When asked for comment, a Google spokesman pointed Fox News to Pichai's comments to Rep. Tom Marino from last week, where Pichai said:

“Right now there are no plans for us to launch a search product in China. We are, in general, always looking to see how best it's part of our core mission and our principles to try hard to provide users with information. We have evidence, based on every country we've operated in, us reaching out and giving users more information has a very positive impact and we feel that calling. But right now there are no plans to launch in China. To the extent we approach a position like that, I will be fully transparent, including with policy makers here, and engage and consult widely.”

Employees of the Mountain View, Calif.-based Google were using Beijing-based website 265.com, which the company bought in 2008 from Chinese billionaire Cai Wensheng, as a sort of market research to see what search queries were being entered. Eventually, the search queries were transferred to Baidu, the leading search engine in China. Google famously pulled out of China in 2010 after it said it would not provide censored search services in the country.

According to the report, engineers who worked on Project Dragonfly were using the data to review a list of websites that Chinese people would see if they entered the same word or phrase into Google. Following that, they checked to see if websites in the search results were blocked due to China's Great Firewall and put together a list of sites that are banned, including Wikipedia, British broadcaster BBC and others. After getting word of this, the company's privacy staff became "really p-ssed" according to one source in The Intercept's story and the engineers working on Project Dragonfly were told they could no longer use the data.

“The 265 data was integral to Dragonfly,” said one source. “Access to the data has been suspended now, which has stopped progress.”

Following the decree from the privacy team, Google employees working on the app-based search engine have used different datasets, including ones from "global Chinese" queries entered into Google that live outside the world's most populous country, including those inside the U.S. and Malaysia. That has made it significantly harder to gather the accuracy of the results, and some team members have left the project, the report added.

A source familiar with the matter told Fox News that has the company has worked on the project and privacy engineers have been brought in, any final launch would be "contingent on a full, final privacy review but," but the company has not yet gotten to that point. The source added that Google's goak to serve its Chinese users has not "dminished" and the company's mission is to "create access for all the world’s information to as many users as possible."

The Dragonfly efforts led to the resignation of several Google employees and prompted more than 700 to sign a letter to Pichai calling for it to be halted last month.

Speaking in front of the House Judiciary Committee amid allegations of anti-conservative bias and privacy violations last week, Pichai said the company's efforts were only an exploration of what a search engine could look like in a country like China.

"Right now, we have no plans to launch [a search product] in China," Pichai said in response to a question from a lawmaker, adding that "getting access to information is an important human right."

This story has been updated with a response from a Google spokesperson.