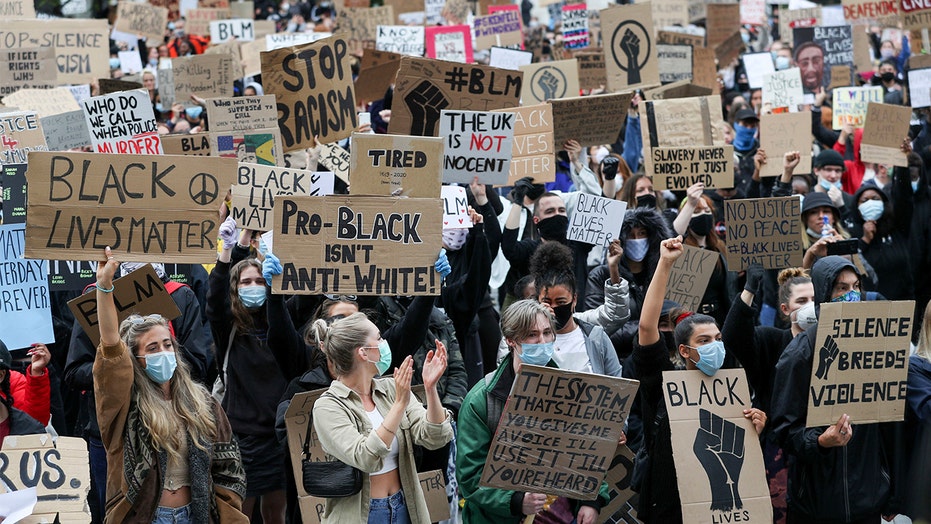 "We acknowledge that racism and violence may look different in different parts of the world, so please use this as a moment to reflect on those who have been lost in your own country or community at a time that works for you," said Google and Alphabet CEO Sundar Pichai, referncing a planned 8 minute and 46 second moment of silence among the company's workers worldwide on Wednesday, in a statement.

"The length of the moment of silence represents the amount of time George Floyd suffered before he was killed. It's meant to serve as a visceral reminder of the injustice inflicted on Mr. Floyd and so many others," Pichai added.

Protesters raise their fist in front of Gracie Mansion, the official residence of the New York mayor, during a protest Tuesday, June 2, 2020, in New York over the death of George Floyd, who died May 25 after he was pinned at the neck by a Minneapolis police officer. (AP Photo/Yuki Iwamura)

Google is donating $12 million to groups working against racial inequities, including to groups the tech giant has partnered with before: the Center for Policing Equity and the Equal Justice Initiative. The company has already donated $32 million to racial justice causes and groups over the last five years, according to the blog post.

Amazon is donating $10 million to a range of groups working the racial justice space, including the Brennan Center for Justice, the ACLU Foundation, NAACP, National Urban League, Year Up and the National Museum of African-American History and Culture, among others.

"Solidarity with our Black employees, customers, and partners, and are committed to helping build a country and a world where everyone can live with dignity and free from fear," said Amazon in a statement.

AMAZON EXTENDS FRONTLINE WORKER BONUS PAY, BUT WILL END IT IN JUNE

However, critics of Big Tech were quick to point out how both companies had contributed to the current conditions in America and worked to assist police departments or the U.S. military.

Over the last few years, Amazon has been blasted by civil liberties groups and its own employees for its facial recognition software having been sold to hundreds of police departments as well as Immigration and Customs Enforement.

Google, which ended its controversial Project Maven military AI program after protests from its employees and outside critics, announced last month that it will build security and app-management tools for the Pentagon's Defense Innovation Unit (DIU) in a reported one-year, seven-figure deal. The Mountain View, Calif., company has also taken heat for allowing the spread of white supremacy and conspiracy theories on YouTube and Googel Search.