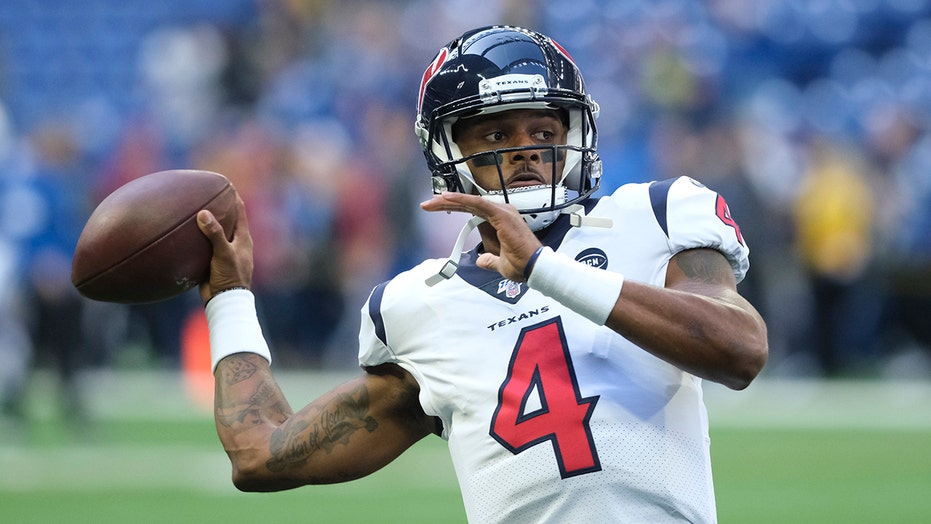 Deshaun Watson is having quite a week.

The 24-year-old signed a four-year, $160 million extension with the Houston Texans on Saturday, has a book coming out Tuesday and will lead his team against Patrick Mahomes and the Super Bowl champion Kansas City Chiefs to open the NFL season on Thursday night.

Despite all this, Watson has plenty more he wants to do and accomplish.

Watson said he is working with German soccer club FC Bayern Munich on something, without providing any details. He is also the executive producer of a movie called “National Champion” loosely based on his career at Clemson and is delving into projects in the art world.

“We’re doing it all but at the same time making sure that my career and my main focus is being the quarterback of the Houston Texans and doing whatever I can to be able to win games,” he said. “What comes first is football, but I feel like I can do a lot of different things.”

Watson, who wore an $1,100 bold leopard print Versace sweater during his news conference on Monday, also hopes to get involved in the fashion industry and thinks his new contract will help him to elevate his style.

“Fashion is definitely going to continue to grow especially now with a little more money in the bank,” he said. “Being able to try to go to Paris, London, different things, Milan, Italy. So, we’ve got some things cooking in the future.”

The quarterback’s new deal will keep him with the Texans through the 2025 season, giving them continuity at position after the franchise has had QB woes for much of its short history.

“To be able to have a quarterback and a person of the caliber of Deshaun Watson under contract for multiple, multiple years is just great ... we always talk about the type of people that we want on this team and in this organization,” coach and general manager Bill O’Brien said. “Deshaun Watson is a shining example of that. He’s just a tremendously hardworking young man, a very bright guy. He’s a winner and he’s a winner at the most important position in football.”

Watson’s book is titled “Pass It On” and recounts the seven qualities he used to navigate a tough childhood and his mother’s battle with cancer to rise from high school football star to national champion at Clemson before becoming a first-round NFL pick.

"It was definitely an opportunity for me to tell my testimony, tell my family story and just the things I’ve learned over the past 24 years,” Watson said. “Just being able to touch other people.”

He hopes the motivational book will be able to reach those who aren’t football fans or don’t know about his life so that he can expand his footprint and help more people.

“I want to use this platform ... not just to be national and local but also be global and touch people across the world,” he said. “I want to be more than just a football player.”

While he spent some of his offseason looking to increase his brand and delve into other interests, now that the season is about to begin, he’s focused on helping the Texans finally win their first championship.

The first test will be a big one when they open the season where they closed the last one with their trip to Arrowhead Stadium on Thursday night. Houston built a 24-0 lead in the first quarter against the Chiefs in last season’s playoffs before Kansas City orchestrated the biggest comeback in franchise history to get a 51-31 win.

Watson said he still thinks about that loss from time to time but tries not to dwell on it.

“I didn’t get upset about it or constantly think about it all the time (but) it’s definitely a motivational factor," he said. “But what I wanted to work on this offseason was to get my craft down and continue to be ready for big-time moments like that and figure out what happened for that situation to change."

He's excited to got another shot at the Chiefs and is glad that he'll get to do it with the spotlight on him in the first game of the season on national television.

“The NFL did a good job with creating the schedule and we have an opportunity to go into the defending Super Bowl champ’s home stadium right off the bat and compete with a great team,” Watson said. “That’s what we want ... this is the best opportunity you can have.”