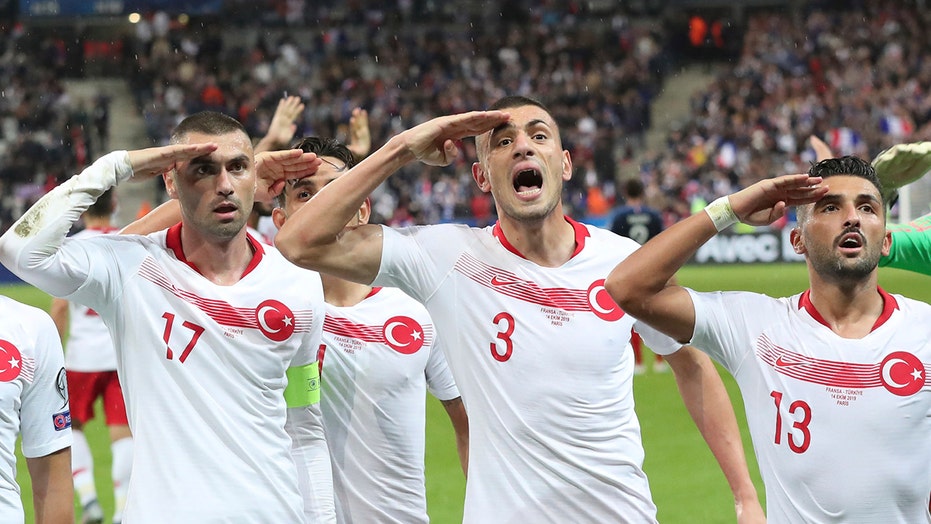 Several players of the Turkish national soccer team provoked the European soccer governing body -- which was already investigating the team -- after celebrating a goal with a military-style salute during a match against France on Monday.

The players – sporting their white jerseys – stood together and did the military salute after defender Kaan Ayhan notched a late equalizer in their Euro 2020 qualifier.

It was an act of defiance, as they were threatened with an investigation by UEFA, which prohibits any political gestures during international matches, for doing a similar celebration last week against Albania.

The celebration was a reference to the Turkish military’s ongoing incursion in Syria, which on Tuesday entered its seventh day.

“For our nation, especially for the ones who are risking their lives for our nation,” Turkish player Cenk Tosun wrote in an Instagram post after the match against Albania.

He posted in a separate post on Monday: "We're not done yet."

On the team’s official Twitter page, they also posted a photo of the entire side all giving the salute after last week’s match.

UEFA told Sky News that it was waiting for official reports regarding the incidents and would be providing no further information or comment.

TRUMP AUTHORIZES SANCTIONS AGAINST TURKEY AMID SYRIA INCURSION, CALLS FOR END TO ITS 'DESTABILIZING ACTIONS'

After the game Monday, France’s sports minister Roxana Maracineanu condemned the players, saying their actions were “contrary to sportsmanship.”

She demanded that UEFA punish the national team for the players' actions.

Meanwhile, a Turkish midfielder was released by German soccer club St. Pauli after an Instagram post supporting his country’s invasion of Kurdish-held regions in northern Syria.

The second-division club said on Monday that “Cenk Sahin has been released from his training and playing duties with immediate effect.”

“The prime factors in reaching the decisions were his repeated disregard for the club’s values and the need to protect the player,” the statement said.

In his Instagram post, Sahin wrote: “We’re on the side of our heroic military and armies. Our prayers are with you!”

The team said it conducted an internal review.

"After numerous discussions with fans, members and friends whose roots lie in Turkey, it has become clear to us that we cannot and should not attempt to gauge nuances in perceptions and attitudes from other cultural backgrounds in detail," St. Pauli said. "That we reject acts of war is not open to doubt or discussion, however. These acts, and the expression of solidarity with them, run counter to the values of the club."

Sahin's existing contract will remain valid, but St. Pauli has given him permission to train and play for other clubs. Sahin, who joined the German team from Istanbul Basaksehir in 2016, is reportedly back in Turkey. A switch can only be completed in the winter transfer window.

Now in its seventh day, Turkey's offensive against the Kurds has upended alliances and is re-drawing the map of northern Syria for yet another time in Syria's 8-year-old war.