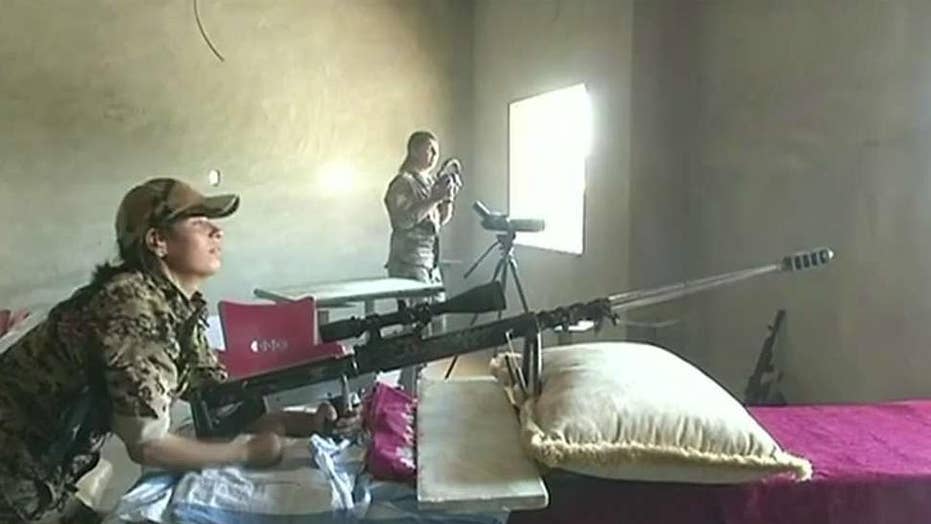 The White House signals they are ready to act as Turkey escalates force in Syria; John Roberts reports from Washington.

President Trump announced Monday afternoon that he will soon issue an executive order imposing sanctions against Turkey for its "destabilizing" offensive in Syria, amid a bipartisan outcry over the president's troop pullback earlier this month that endangered U.S.-aligned Kurdish forces.

The sanctions followed the president's Oct. 7 threat, when he warned that "if Turkey does anything that I, in my great and unmatched wisdom, consider to be off limits, I will totally destroy and obliterate the Economy of Turkey (I’ve done before!)."

Meanwhile, Vice President Mike Pence told reporters that Trump had communicated on a call with Turkish President Recep Tayyip Erdogan that he wanted Turkey to implement an immediate ceasefire. Trump also offered to mediate an arbitration, the vice president said, and directed Pence and National Security Adviser Robert O'Brien to lead a delegation to Turkey to begin negotiations immediately.

And South Carolina Republican Sen. Lindsey Graham, a Trump ally who has strongly opposed his decision to withdraw from parts of Syria, said in a statement that he "strongly" supports the president's sanctions.

"The President made it clear to Turkish officials that any attack on Kobani, a Kurdish enclave near the Turkish border, would be an international outrage that could not stand," Graham, who was on the call with Trump and officials in the region, added.

He continued: "Equally important, President Trump reached out to General Mazloum, the leader of Kurdish forces that led the main assaults against the ISIS Caliphate in Syria. President Trump assured General Mazloum that he would do everything possible to stop the Turkish incursion and seek a negotiated settlement beneficial to all parties, [and] was very firm in highlighting the need that thousands of ISIS prisoners in the custody of Kurdish forces cannot and should not be released. "

People standing on a rooftop in Akcakale, Sanliurfa province, southeastern Turkey, at the border with Syria, watch as in the background smoke billows from fires caused by Turkish bombardment in Tal Abyad, Syria, Sunday, Oct. 13, 2019. Turkey's official Anadolu news agency says Turkey-backed Syrian forces have advanced into the center of a Syrian border town, Tal Abyad, on the fifth day of the Turkey's military offensive against Kurdish fighters in Syria. (AP Photo/Lefteris Pitarakis)

In a statement posted to Twitter earlier on Monday, Trump specifically announced that steel tariffs would "be increased back up to 50 percent," and the U.S. will "immediately stop negotiations ... with respect to a $100 billion trade deal with Turkey."

The order would enable "powerful" additional sanctions against those who "may be involved in serious human rights abuses, obstructing a ceasefire, preventing displaced persons from returning home, forcibly repatriation refugees, or threatening the peace, security, or stability in Syria," Trump wrote.

Fox News has obtained a copy of the executive order, which declares a national emergency to address "the situation in and in relation to Syria, and in particular the recent actions by the Government of Turkey to conduct a military offensive into northeast Syria."

Current and former Turkish officials, as well as anyone contributing to "Turkey's destabilizing actions in northeast Syria," would be targeted, Trump said.

Remaining U.S. troops in northeast Syria will be withdrawn as planned, Trump said, and redeployed "in the region to monitor the situation and prevent a repeat of 2014," when ISIS made major territorial gains.

In separate tweets, the president said he would "much rather focus on our Southern border" than the conflict in Syria.

Trump also emphasized that Syria "wants naturally to protect the Kurds." The New York Times reported that a deal between Kurdish forces and Damascus – which was announced Sunday evening – would enable Syrian President Bashar al-Assad's forces to attempt to regain a foothold in the country's northeast.

A poster of Turkey's President Recep Tayyip Erdogan is held up during show of support by about a dozen people for Turkey's operation in Syria, in the border town of Akcakale, Sanliurfa province, southeastern Turkey, on Monday, Oct. 14, 2019. Erdogan has criticized NATO allies which are looking to broaden an arms embargo against Turkey over its push into northern Syria. (AP Photo/Lefteris Pitarakis)

"An agreement has been reached with the Syrian government – whose duty it is to protect the country's borders and preserve Syrian sovereignty – for the Syrian Army to enter and deploy along the Syrian-Turkish border to help the [Syrian Democratic Forces, SDF] stop this aggression" by Turkey, the SDF, which is a primarily Kurdish militia, said in a statement.

Syrian TV said government troops were moving to the north to confront the Turkish invasion but gave no details.

Adding to the turmoil Sunday, hundreds of Islamic State families and supporters escaped from a holding camp in Syria amid the fighting between Turkish forces and the Kurds.

The fast-deteriorating situation was set in motion last week, when Trump ordered U.S. troops in northern Syria to step aside, clearing the way for an attack by Turkey, which regards the Kurds as terrorists. Since 2014, the Kurds have fought alongside the U.S. in defeating the Islamic State in Syria, and Trump's move was decried at home and abroad as a betrayal of an ally.

The developments came as graphic images of violence directed at Kurds circulated on social media.

Turkey has justified its ongoing invasion of northeast Syria to the United Nations by saying it's exercising its right to self-defense under the U.N. Charter, according to a letter circulated Monday.

Ankara said the military offensive was undertaken to counter an "imminent terrorist threat" and to ensure the security of its borders from Syrian Kurdish militias, whom it calls "terrorists," and the Islamic State extremist group.

KURDS ANNOUNCE DEAL WITH DAMASCUS AMID US PULLOUT 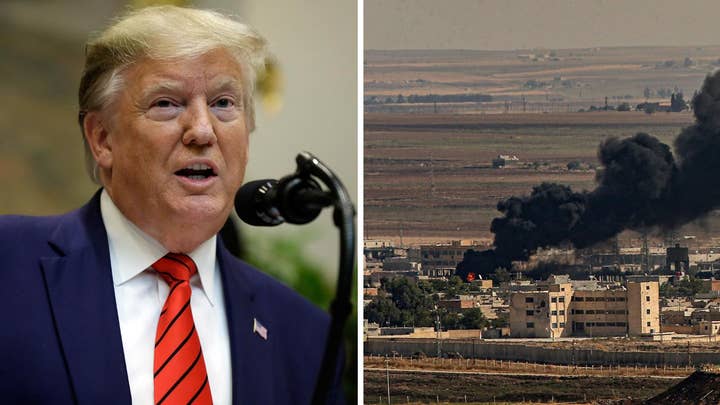 Turkey's position is that the main Kurdish group in Syria is linked to an outlawed Kurdish group in Turkey, the Kurdistan Workers' Party. Known as the PKK, that group has waged a 35-year old conflict against the Turkish state that has left tens of thousands of people dead.

Turkey's U.N. Ambassador Feridun Sinirlioglu said in the letter to the Security Council dated Oct. 9 that its counter-terrorism operation will be "proportionate, measured and responsible."

"The operation will target only terrorists and their hideouts, shelters, emplacements, weapons, vehicles and equipment," he said. "All precautions are taken to avoid collateral damage to the civilian population."

But U.N. Secretary-General Antonio Guterres said Monday that at least 160,000 civilians have been newly displaced and that military action has already reportedly resulted in many civilian casualties.

A Turkish forces tank is driven to its new position after was transported by trucks, on a road towards the border with Syria in Sanliurfa province, Turkey, on Monday, Oct. 14, 2019. Syrian troops entered several northern towns and villages Monday, getting close to the Turkish border as Turkey's army and opposition forces backed by Ankara marched south in the same direction, raising concerns of a clash between the two sides as Turkey's invasion of northern Syria entered its sixth day. (AP Photo/Emrah Gurel)

Sinirlioglu said Syria's eight-year conflict "has created a breeding ground for various terrorist organizations, posing a wide range of threats to the region and beyond."

Despite these claims, many foreign fighters who joined IS originally found their way to Syria through Turkey, and it was widely believed Turkish authorities turned a blind eye at the time.

JIM HANSON: U.S. MUST DO THIS TO PREVENT ISIS RESURGENCE

Turkey said it invoked Article 51 of the U.N. Charter, which authorizes military action in self-defense. It also cited six Security Council resolutions since 2001 dealing with the fight against terrorism. 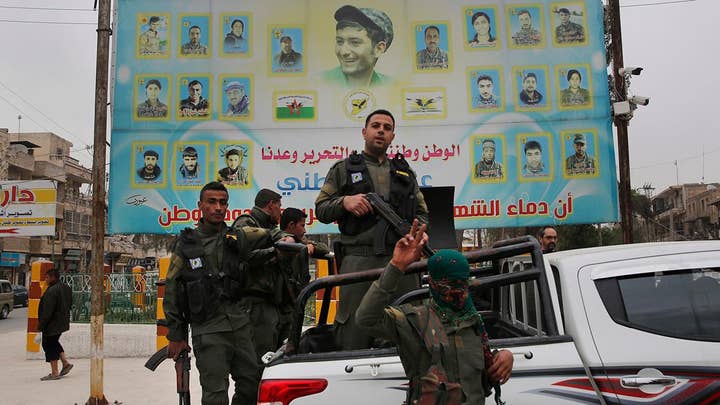 "Turkey's national security has been under the direct and imminent threat of terrorist organizations operating in the east of the Euphrates in Syria," Sinirlioglu said.

In addition, he said, an agreement signed by Turkey and Syria in Adana on Oct. 20, 1998 "constitutes a contractual basis for my country to fight all kinds of terrorism emanating from Syrian territory in its hideouts and in an effective timely manner."

He said the country "will carry out this operation in support of efforts to facilitate the safe return of displaced Syrians to their homes of origin or other places of their choice in Syria."

He stressed Turkey's "strong commitment" to a political solution to the Syrian conflict based on a roadmap to peace adopted by key nations in 2012 and endorsed by the Security Council in 2015.