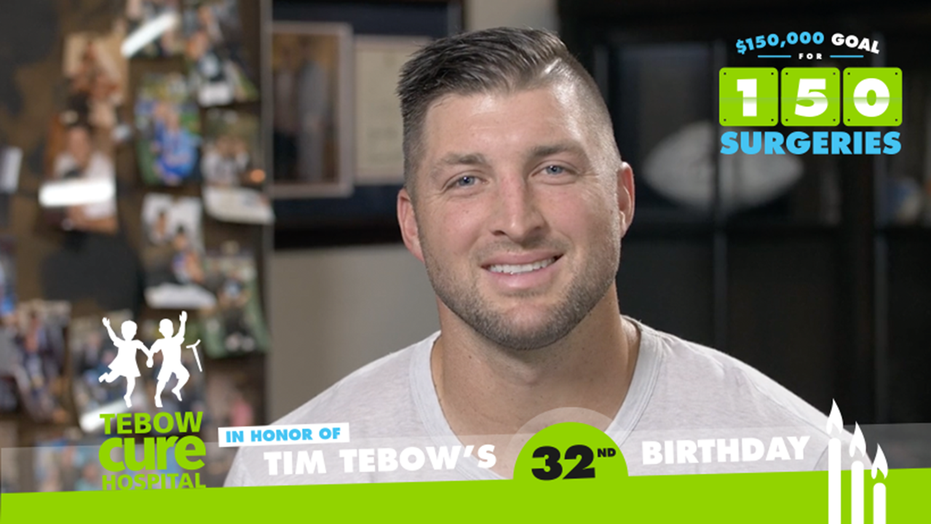 Tim Tebow turns 32 Wednesday and he will celebrate by giving back in a big way.

The outspoken Christian athlete, who suffered a reportedly season-ending hand injury last month, is forgoing well-wishes and gifts this year. Instead, he is asking for donations with a goal of raising $150,000 to provide 150 life-changing surgeries at the Tebow CURE Hospital for children in the Philippines.

"These are kids that, without us being there, they wouldn’t be helped," said Tebow, who was born in the Philippines while his parents served as missionaries.

"They wouldn't be loved and they wouldn't be cared for, but if there's any way that I would like to celebrate it's helping kids in their darkest hour of need," Tebow said in a video to supporters. "Because that's a true celebration!"

Tim Tebow praying with a patient at the Tebow CURE Hospital in the Philippines. (Tim Tebow Foundation)

Tebow said he got his call "to fight for those who can't fight for themselves" during his first overseas mission trip to the Southeast Asian nation.

"I have always had a great love and passion for the Filipino people,” he said.

It is there that a 15-year-old Tebow was inspired to start the Tim Tebow Foundation and where he opened the pediatric hospital in Davao City, on the island of Mindanao, five years ago.

The Tebow CURE Hospital specializes in pediatric orthopedic surgeries for conditions such as clubfoot and spinal deformities. It also provides physical and spiritual healing to Filipino children who otherwise would not be able to receive the care they need, the foundation said.

Michael Hulland, executive director of CURE International, which partnered with Tebow, described the fundraiser as an "investment in God's Kingdom" to serve children on a daily basis.

The Tebow CURE Hospital has had over 17,000 patients and performed more than 3,300 surgeries. They have had over 4,000 expressions of faith, the foundation claims.