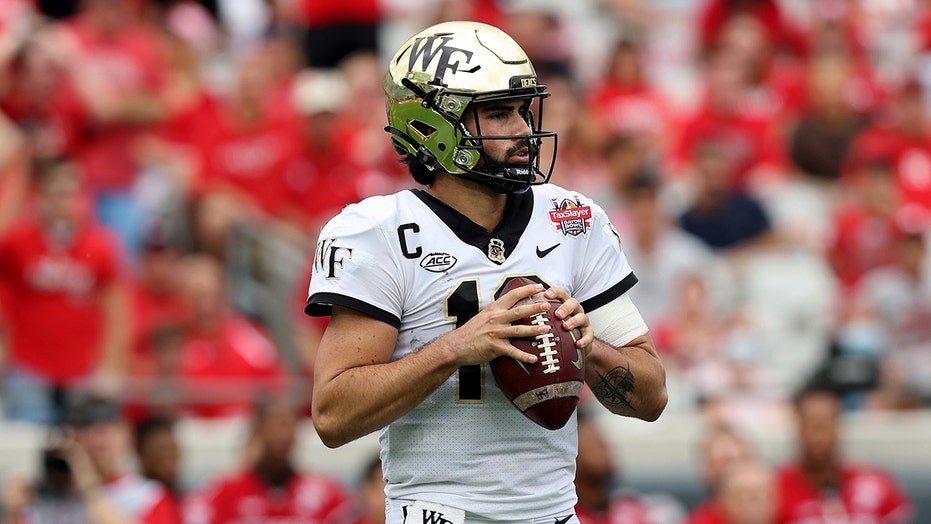 Hartman tossed three touchdown passes, two of them to tight end Brandon Chapman, and the 20th-ranked Demon Deacons beat Rutgers 38-10 in the Gator Bowl on Friday to reach 11 wins for the second time in program history.

Hartman completed 23 of 39 passes for 304 yards. He added 21 more yards rushing and pushed his touchdown total to 50 this season — 39 passing and 11 rushing. He was named the winning team's most valuable player.

"It's everything," he said. "I'm just enjoying the moment."

The Demon Deacons (11-3) controlled the game from the start, scoring on their first three drives and opening a double-digit lead just before halftime. It played out about as expected given Rutgers (5-8) was a late replacement for 23rd-ranked Texas A&M.

The Aggies pulled out because of a lack of available players due to injuries, opt-outs, transfers and COVID-19 issues. The NCAA gave Rutgers the first shot at filling the void because it had the highest Academic Progress Rate score of all the eligible 5-7 teams.

Rutgers coach Greg Schiano hastily gathered his players from Christmas break and held two practices in a heated bubble before heading south. They got in two more in nearby Ponte Vedra Beach this week before taking the field.

They were ready, willing and probably overmatched against the one of the nation’s best offenses. When it was over, Schiano raised his fist and saluted the Rutgers faithful who made the long trip to much warmer weather.

"What we did has never been done before," Schiano said. "This is the hardest week of work that I've ever done as a coach, and I've done it for 34 years. I'll remember everything it took and all the people who made it possible. ... But that was a little bit unhealthy."

The Demon Deacons finished with 452 yards, converted 8 of 15 third downs and their lone fourth-down try. The offensive show carried them to 11 wins for the first time since 2006, which was their only Atlantic Coast Conference championship.

"This was a historical season," coach Dave Clawson said. "We're hopefully part of a debate of what the greatest team is. The 2006 team was an incredible team, but the 2021 was a really good team as well."

Wake Forest: The Demon Deacons should be among the preseason favorites in the Atlantic Coast Conference next season. They could lose as few as six of 22 starters.

Rutgers: The Scarlet Knights turned the ball over twice, which was twice too many for an offensively challenged team with a small margin for error. Rutgers was 5-0 this season when playing turning-free football.

The key play came in the second quarter, when Wake Forest cornerback Gavin Holmes stepped in front of Noah Vedral’s pass to Joshua Youngblood at the goal line and intercepted it. Wake led 17-10 at the time and ended up driving for a field goal and a 10-point lead at the break.

Vedral was one of five players who threw passes for Rutgers. He completed 8 of 13 passes for 87 yards and the interception.

Rutgers quarterback Johnny Langan was all over the field. He lined up at quarterback, running back, tight end and receiver. He completed both passes for 21 yards. He ran six times for 20 yards. And he caught six balls for 57 yards.

Wake Forest linebacker Ryan Smenda, a junior who grew up in nearby Orange Park, was ejected for the third time this season for targeting. Smenda barely made contact, if at all, this time. He was penalized for intent because he led with his helmet while chasing Rutgers quarterback Gavin Wimsatt. Wimsatt slid late, and Smenda flew over the top of him.

Smenda also was ejected in regular-season games against Army (Oct. 23) and North Carolina State (Nov. 13). He will have to sit out the first half of Wake’s 2022 season opener against Virginia Military Institute on Sept. 1.

Wake Forest punter Ivan Mora was carted off the field in the fourth quarter with an air cast on his right ankle/foot. Mora got caught at the bottom of a pileup after kicking off.

Wake Forest expects to get Hartman back for a fifth year. He’s started 33 games over four seasons and accounted for 87 touchdowns, including 71 passing.