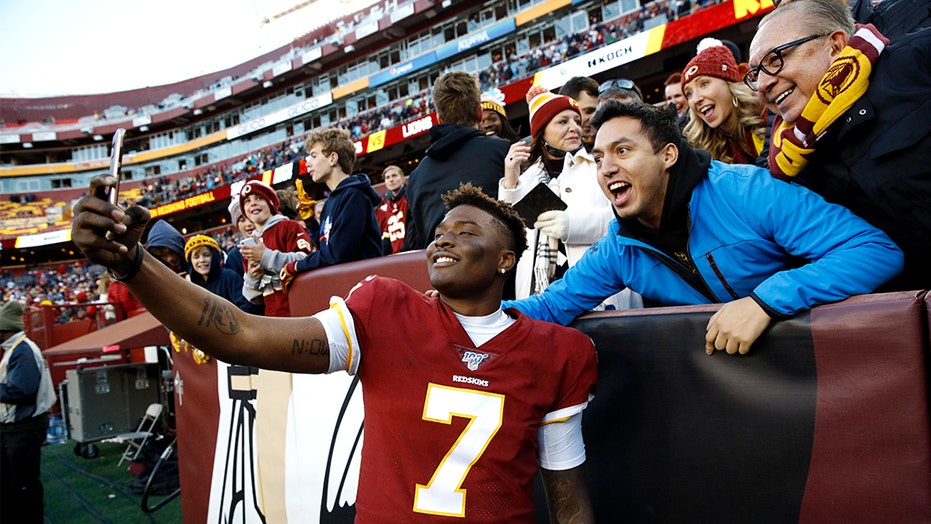 Theismann, who allowed Haskins to wear the fabled No. 7 jersey earlier in the year, criticized Haskins for not being with his team to take the final snap in Washington’s win over the Detroit Lions. He expressed his concerns on Twitter.

“How do [you] miss the last snap of a game because ur [sic] taking selfies. That’s unprofessional & wrong,” Theismann tweeted.

He then appeared in a radio interview Monday with 106.7 The Fan in D.C. and called Haskins’ decision “immature,” according to NBC Sports Washington.

“It was something that was immature,” Theismann said. “To miss that moment, I felt bad for Dwayne, but he brought it upon himself.”

He also said it was “unthinkable” that Haskins didn’t get to celebrate his first win as an NFL quarterback with his teammates.

“I mean it really is, it's unthinkable that you are in a situation where you have a chance to have quarterbacked your first victory in professional football and you don't get a chance to share that moment with your teammates. And that's the thing that got me,” Theismann said.

Washington Redskins quarterback Dwayne Haskins takes selfies with fans during the second half of an NFL football game against the Detroit Lions, Sunday, Nov. 24, 2019, in Landover, Md. The Redskins won 19-16.  (AP)

He added: “When you get a chance to get into that victory formation and you step in the huddle and you go, 'Victory formation on one.’ And you take that last snap, that's a very sacred moment to me, it always has been in football. I remember the one in the Super Bowl vividly. And that's a moment you share with your teammates. People don't understand that. That's part of the camaraderie of this game.”

Redskins interim coach Bill Callahan said Monday that it was “disappointing” that Haskins was taking a selfie on the sideline but understood the young quarterback getting “caught up in the emotion of the game itself,” according to Pro Football Talk.

“I think it got away from him a little bit, but I think he’s fully aware that professionally his mind should be on the game throughout the duration of 60 minutes,” Callahan said.

Meanwhile, Jamie Lopez-Verduzco was identified as the fan who took the selfie with Haskins. He dunked on Theismann with a tweet of his own.

He defended Haskins in an interview with The Washington Post.

“This just shows that Dwayne is very in touch with his fans,” he said. “It also says a lot about his character, if he’s willing to share such a special moment with the people who support him and the team.”