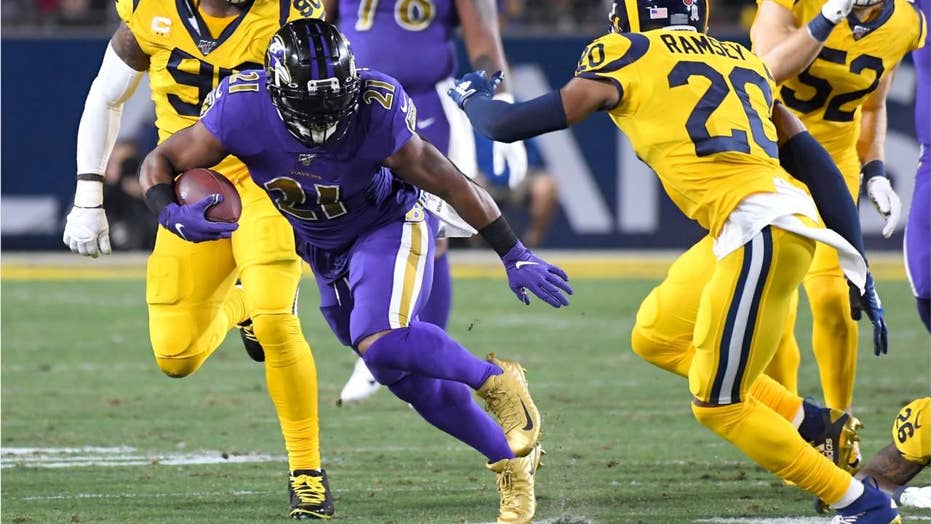 Los Angeles Rams' cornerback Jalen Ramsey and Baltimore Ravens' cornerback Marcus Peters were seen talking some serious trash during their game on Monday Night Football. Ramsey reportedly had to be restrained while heading back into the locker room after the team’s blowout loss against Baltimore.

Los Angeles Rams cornerback Jalen Ramsey had to be restrained while heading back into the locker room after the team’s blowout loss against the Baltimore Ravens.

Ramsey was seen on the field after the game talking trash with Ravens cornerback Marcus Peters. The Ravens defender was vocal after defeating his former team, reportedly telling the Rams, “kicking you’re a*s out of the playoffs.” Ramsey and Peters were seen jawing at each other on the field.

Ramsey was then seen shouting at Ravens players while heading back to the locker room. NBC Los Angeles reporter Kenny Holmes captured the moment Rams personnel had to carry Ramsey back to their locker room.

Baltimore defeated Los Angeles, 45-6, as Ravens quarterback Lamar Jackson threw five touchdown passes to strengthen his case for MVP. Peters, who started the season with the Rams, recorded an interception in the game and celebrated with his current teammates in the Rams’ end zone.

“[Peters] wanted to come in and get this win,” Ravens linebacker Matthew Judon told the Baltimore Sun after the game. “And you always do, when you go back home. ... For him to get that pick late in the game ... He’s going to let you know about it.”

Ramsey declined to comment on the incident between himself and Peters.

“If y’all have some questions about the game, I’ll answer that. Other than that, I’m not going to answer that,” he said.