In this Sept. 11, 2017 file photo, from left, Miami Dolphins' Jelani Jenkins, Arian Foster, Michael Thomas, and Kenny Stills, kneel during the singing of the national anthem before an NFL football game against the Seattle Seahawks in Seattle. (AP Photo/Stephen Brashear, File)

A multi-game suspension is reportedly among the possible repercussions for Miami Dolphins players who choose to stage an on-field protest during the national anthem in the upcoming NFL season.

Whether such punishments will actually be levied seems unclear, however, as a team source told the Miami Herald that "all options are on the table."

In the team’s discipline document, a copy of which was given to the Associated Press, a line regarding “Proper Anthem Conduct” was added to behavior considered “detrimental to the club.” Everything included on this list is reportedly subject to a potential paid or unpaid suspension up to four games, a fine or both.

The identity of the individual who provided the document was not disclosed by the Associated Press since it has not yet been released publically.

“Players who are on the field during the Anthem performance must stand and show respect for the flag and the Anthem,” the final item on the list of "detrimental" conduct said. Among the other items on the list include riding motorcycles during the season, gambling and drug use or possession.

TENNESSEE TITANS’ JURRELL CASEY SAYS HE PLANS TO KEEP PROTESTING AND WILL ‘TAKE MY FINE’ IN UPCOMING NFL SEASON: REPORT

However, according to the Miami Herald, it was unclear how strictly anthem protest consequences will be enforced.

“The NFL required each team to submit their rules regarding the anthem before reporting for training camp,” a Miami Dolphins source told the outlet. “Since the rookies reported on Wednesday, [the Dolphins] had to have a policy in place.”

“We will address this once the season starts and all options are still on the table,” the source continued.

A similar statement was also provided to the Associated Press, who added that if the team chooses, they could decide not to issue any suspensions or fine any player who protests the anthem.

Team and league sources provided ESPN reporter Jeff Darlington with a similar explanation. However, he said a source from the team told him that the Dolphins have "no intention of suspending a player for four games based on any type of anthem protest."

Representatives for the NFL and the Miami Dolphins did not immediately respond to Fox News’ request for comment.

The league declined to comment to the Associated Press. 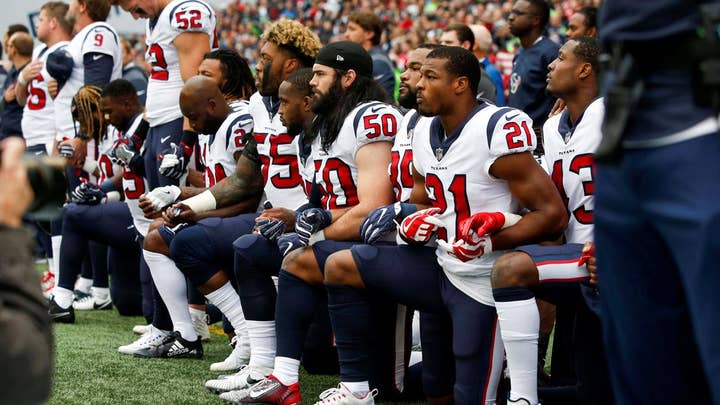 The NFL adopted a policy in May stating that it would penalize teams and league personnel who do not “stand and show respect for the flag and the Anthem” while on the field.

A statement at the time from league Commissioner Roger Goodell said the new policy withdrew the requirement for players to stand on the field during the song and anyone who decided “not to stand for the Anthem” could remain in the locker room until its conclusion.

Since then, the NFL Players Association filed a grievance against the league over the policy, arguing that it infringed on the athletes’ rights.

The NFL and NFLPA released a joint statement Thursday night saying that "through recent discussions" the two entities "have been working on a resolution to the anthem issue. In order to allow this constructive dialogue to continue, we have come to a standstill agreement on the NFLPA's grievance and on the NFL's anthem policy."

"No new rules relating to the anthem will be issued or enforced for the next several weeks while these confidential discussions are ongoing," the statement continued. "The NFL and NFLPA reflect the great values of America, which are repeatedly demonstrated by the many players doing extraordinary work in communities across our country to promote equality, fairness and justice. Our shared focus will remain on finding a solution to the anthem issue through mutual, good faith commitments, outside of litigation."

National anthem protests surrounding the NFL initially began during the 2016-2017 season by former San Francisco 49ers quarterback Colin Kaepernick, who started kneeling during the song to protest police brutality. The hotly contested move, and other protest variations, were later adapted by other players.