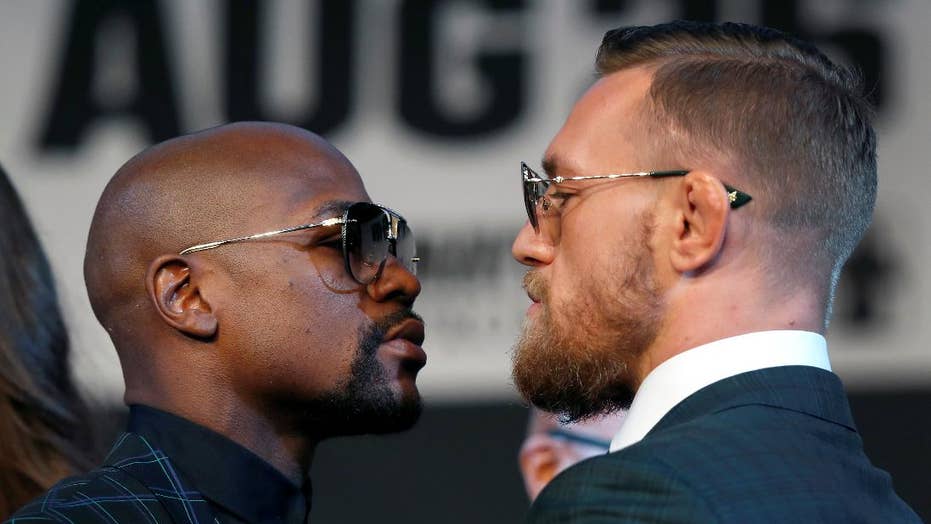 Mayweather vs. McGregor: The fight on piracy

The Floyd Mayweather versus Conor McGregor fight is set to become the most watched and most pirated pay-per-view event of all time.

LAS VEGAS (AP) -- Floyd Mayweather Jr. was a winner the day he signed the contract to come out of retirement to fight Conor McGregor in what could be the richest fight ever.

He'll be a winner in the ring Saturday night, too, capping a career in which he won all 50 of his professional fights and helped sell more than $1 billion in pay-per-views.

There's not a lot to analyze about a fight that is as much spectacle as it is competition. The greatest defensive fighter of his time, Mayweather simply needs to do the kind of things that won him 49 previous fights to beat a UFC star in his first boxing bout.

Unless he suddenly gets old in the ring, Mayweather can then laugh all the way to the bank.

He'll make some $200 million, and it will be easy money. McGregor will be exposed for what he is -- a very good MMA fighter who doesn't have enough experience in a boxing ring to beat a top 10 fighter, much less someone with Mayweather's skills.

It could go quick, or Mayweather could carry him for 12 ugly rounds. Either way, Mayweather will be in charge in a fight that will have a lot of people feeling buyer's remorse Sunday morning.

Never mind that he's 40 and trained at some very odd hours for his first fight in nearly two years. Forget that he was hosting late night meet-and-greets at his strip club when his time may have been better used resting up for a younger and bigger opponent.

There's a reason oddsmakers started this out at 11-1 odds favoring Mayweather. And while the hype has narrowed the odds quite a bit, it hasn't changed the underlying dynamics of what might happen when the two step in the ring together Saturday night on the Las Vegas Strip.

McGregor has vowed to knock him out within two rounds. Mayweather is so unconcerned that he says he's not going to run and hide.

"I'm coming straight ahead," Mayweather said. "So he doesn't have anything to worry about."

Actually, McGregor has a lot to worry about. Finding Mayweather to hit is at the top of the list because even if Mayweather fights in the center of the ring he has such good reflexes and movement that McGregor could find himself swinging at thin air most of the time.

And, let's face it, if Mayweather wants to embarrass McGregor -- or force him into a foul of some sort -- he's got the skillset to do just that.

This isn't MMA, where fighters often have to defend so much against kicks and takedowns that they leave their chins unguarded. This is boxing, where McGregor has only his two hands and nothing else that Mayweather hasn't seen in his long career.

Even if Mayweather is not known as a big puncher, his punches add up. Remember, it was Mayweather who asked for the smaller 8-ounce gloves, so maybe it's not all talk when his camp says he's looking to stop McGregor.

Also remember that it was just 17 months ago that McGregor was badly beaten up in a UFC fight he lost by a second-round submission to Nate Diaz.

Yes, there's a chance Mayweather's timing isn't there at his age and after two years out of the ring. There's also a chance McGregor flusters him with the same kind of roughhouse tactics that worked for Marcos Maidana in their first fight.

Anything is possible in boxing, anything. If any proof is needed, look up the Fan Man and the Bite Fight.

But those chances rank somewhere between slim and none. Even if Mayweather finds himself in some sort of trouble he's shown the ability to adjust in the ring with anything anyone has ever tried against him.

It's Mayweather's last fight and he wants to go out with a bang.

He'll do it by making easy work against a fighter who really has no business being in the ring with him in the first place.

Tim Dahlberg has been covering boxing for The Associated Press for more than 30 years. Write to him at tdahlberg(at)ap.org or http://twitter.com/timdahlberg