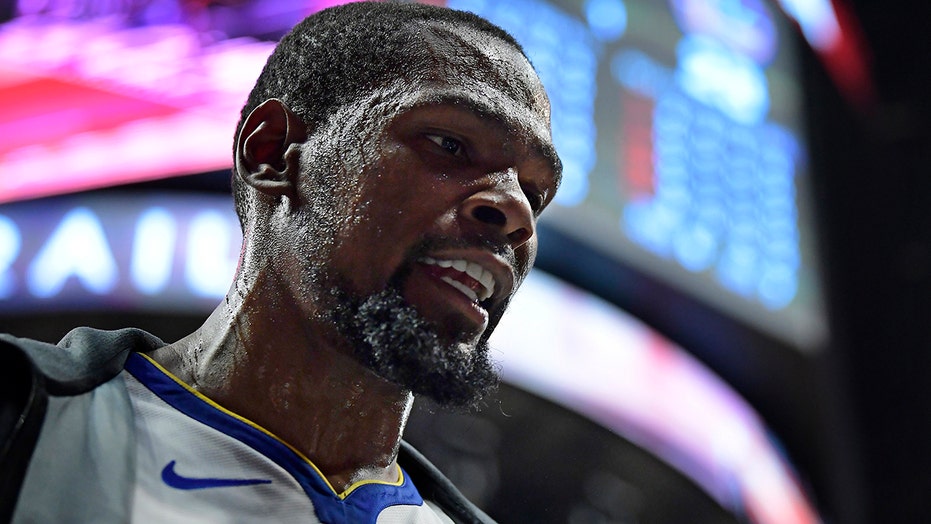 All eyes are going to be on Kevin Durant once free agency begins.

Mostly because he is likely to become a free agent once the market open but also because no one knows what he's going to do since he injured his Achilles in the NBA Finals against the Toronto Raptors.

The injury could mean many things -- teams may stay away from giving him a max contract because he's likely to sit out a year rehabbing the Achilles or Durant may end up choosing to stay with the Golden State Warriors and pick up his player option before the June 29 deadline.

Here are five teams that could sign Durant once free agency begins on June 30.

Was this Durant's final game in a Warriors jersey? (Chris Young/The Canadian Press via AP)

The injury Durant suffered during the Finals with the Warriors could have done two things -- give Durant a reason to opt into his player option for next season or make Durant feel like he was misled about when he could return from his quad injury which preceded the Achilles rupture. Basketball insider Ric Bucher told 95.7 The Game it appears Durant wasn't happy with the outcome of his return and may blame the Warriors over it. Golden State is reportedly interested in offering Durant a max contract, but his willingness to even consider accepting the deal is unclear.

It's weird to think that a team like the Nets, who surprisingly made the playoffs during the 2018-19 season could be the front runners for Durant -- but ESPN reported that is the case. Brooklyn wouldn't be able to offer as much as the Warriors could and it's unclear whether Durant would want to play with someone like Kyrie Irving -- who the Nets are looking to bring onto the team with him in a package. Still, having Durant, even for about three years while he recovers, gives the Nets some credibility in the league.

Knicks fans would love to have Durant. (AP)

While the Nets may be the front runners, Durant is reportedly willing to consider the Knicks. Fans have been clamoring for Durant to join the team since the beginning of last season. Fans put up a billboard in Manhattan trying to recruit him, while others are writing him letters in hopes he would come to the basketball Mecca. He is reportedly expected to make his decision independently of any other free agent.

Can a super team be forming in Los Angeles? (AP Photo/Ben Margot)

While the Lakers appeared to have interest in Durant at the beginning of the season, the team's reported trade for Anthony Davis might take them out of the running. The Lakers would need to clear more cap space to be able to sign any big-time free agent to a max contract. The Lakers may have an edge over other teams in terms of forming a super team, but whether Durant wants to play with LeBron James is a different question.

Durant would the top guy for the Clippers. (AP)

Durant is reportedly considering the Clippers during free agency. If he is willing to be the star of a team again, the Clippers would be the perfect team to join. Los Angeles doesn't have one superstar to rely on but were able to make the playoffs last season as a No. 8 seed. Durant would immediately become the star and wouldn't have to live in the shadows of current or past players like he would if he joined the Lakers.