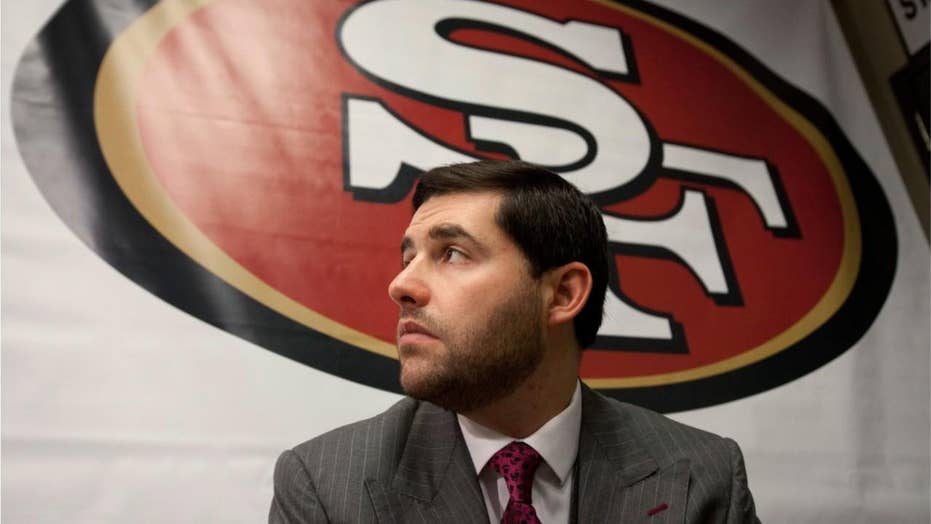 Who is Jed York? 5 things to know about the San Francisco 49ers' CEO

Five things to know about the CEO and operating head of the Niners' franchise, Jed York.

The San Francisco 49ers are preparing to play in their seventh Super Bowl when they face off the Kansas City Chiefs in Super Bowl LIV at Hard Rock Stadium in Miami Gardens, Fla., next month.

The CEO and operating head of the Niners' franchise is 39-year-old Jed York, the son of co-chairs Denise DeBartolo York and John York. The younger York became the team president and operating head in 2008, with his parents maintaining they would provide the resources and advice to help win the team a Super Bowl.

Here are some other things to know about York before the Super Bowl.

Jed York was in finance before going to the Niners. (Photo by Michael Zagaris/San Francisco 49ers/Getty Images)

York was born in Ohio and attended Notre Dame University after high school. He graduated Notre Dame with a BA in finance and history and got his first real-world job as a financial analyst for Guggenheim Partners in New York City. However, after one year he quit his job.

He followed in the footsteps of his famous football family. (Photo by Michael Zagaris/San Francisco 49ers/Getty Images)

In December 2008, York was named team president who would oversee all football operations. His parents assumed roles as co-chairs and would attend NFL owners meetings representing the Niners.

Denise DeBartolo York said it was important that Jed York learned “every aspect of the 49ers and grow into a leadership role.” The team said that every position Jed held was essential in learning how a major sports franchise operates.

Jim Harbaugh had a contentious relationship with Jed York at the end of his tenure in San Francisco. (Kyle Terada-USA Today Sports)

San Francisco hired Jim Harbaugh to coach the team before the start of the 2011 season and, prior to Kyle Shanahan, Harbaugh had been the most successful coach for the team in several years. In Harbaugh’s four seasons, he won two NFC West division titles, an NFC Championship and made the playoffs in three of the four seasons he was there.

However, tensions reportedly grew between York and Harbaugh toward the end of the 2017 season. York was criticized for a tweet about the 49ers losing and then received tons of backlash when he decided to fire Harbaugh.

“It’s up to us to make sure we compete for and win Super Bowls,” he said, according to Pro Football Talk. “That’s our only goal. We don’t raise division championship banners, we don’t raise NFC Championship banners. We raise Super Bowl banners. And whenever we don’t deliver that, I hope that you will hold me directly responsible and accountable for it. And we look forward to getting this thing back on track.”

York took a lot of flak and, between one season of Jim Tomsula and another of Chip Kelly, the 49ers continued to be laughing stocks of the NFL.

Colin Kaepernick got support from York during his time in San Francisco. (AP Photo/Tony Avelar, File)

Colin Kaepernick created a movement when he decided to kneel during the national anthem to raise awareness of perceived systemic racial injustice across the U.S. When Kaepernick opted out of his contract with the Niners and was still attempting to find a job in 2018, York came out in support of the quarterback and said in a radio interview that he didn’t tell teams not to sign him.

“It's hard for me to see taking a knee — like, if you can come up with a community or society where taking a knee is a disrespectful act, like by all means show me,” York said. "I feel like he tried to modify his position to be as respectful as possible during a very, very sacrosanct moment during a professional football game. And I think that the narrative sort of spun out of control. ... We had no negative conversations with other teams saying, ‘Don't sign Colin.’ We wouldn't do that with Colin. We wouldn't do that with anybody.”

In 2016, York announced the 49ers Foundation would contribute $1 million toward “improving racial and economic inequality and fostering communication and collaboration between law enforcement and the communities they serve here in the Bay Area.”

5) REBUILD TO THE SUPER BOWL

York made two key moves in helping the 49ers get back to glory. John Lynch was hired as the team’s general manager in 2017 and Kyle Shanahan’s hiring soon followed.

The team then acquired Jimmy Garoppolo from the New England Patriots and built an offense around him with players like George Kittle, Matt Breida, Raheem Mostert and Deebo Samuel, along with investing in a defense led by Richard Sherman and bolstered by players like Nick Bosa, Fred Warner, Arik Armstead and DeForest Buckner.

Super Bowl LIV will be the team’s second under York’s leadership.