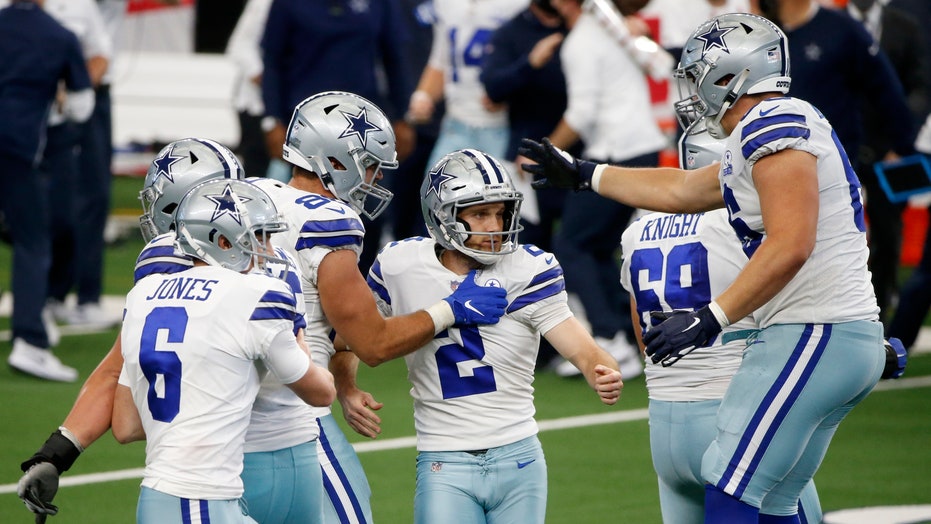 The Dallas Cowboys pulled off an improbable win on Sunday against the Atlanta Falcons.

Down by 15 points in the fourth quarter, Dak Prescott threw for over 400 yards, and ran for three touchdowns, becoming the first quarterback in league history to accomplish those feats, to lead the Cowboys to a 40-39 come-from-behind win over Atlanta.

Dallas recovered an onside kick with 1:48 to go in the game. On that possession, Prescott connected with rookie wide receiver CeeDee Lamb for a 24-yard pass-and-catch, setting up a game-winning, 46-yard field goal by kicker Greg Zuerlein as time expired.

The Cowboys had four turnovers, and they trailed by as many as 20 points in the game.

Falcons quarterback Matt Ryan threw four touchdown passes, two of the three were off lost fumbles from the Cowboys in the first quarter, which ended with Atlanta in front 20-0.

GIANTS FEAR SAQUON BARKLEY TORE HIS ACL, OUT FOR THE SEASON: REPORTS

But the Falcons couldn't avoid their first 0-2 start in six seasons under coach Dan Quinn in a performance reminiscent of their blown 28-3 lead in a Super Bowl loss to the New England Patriots in Houston to finish the 2016 season. In the past nine seasons, Atlanta now has two of the three instances in which a team lost after leading by at least 15 points in the fourth quarter.

A successful onside kick for Dallas came after two failed fake punts and another gamble that didn't work when head coach Mike McCarthy went for the 2-point conversion before the final touchdown the Cowboys would have needed to get even.

Playing without both of his starting tackles, Prescott was 34 of 47 for 450 yards and a touchdown with one sack. It was his first game with multiple rushing TDs. The two-time Pro Bowler is the franchise leader for rushing scores from a QB.