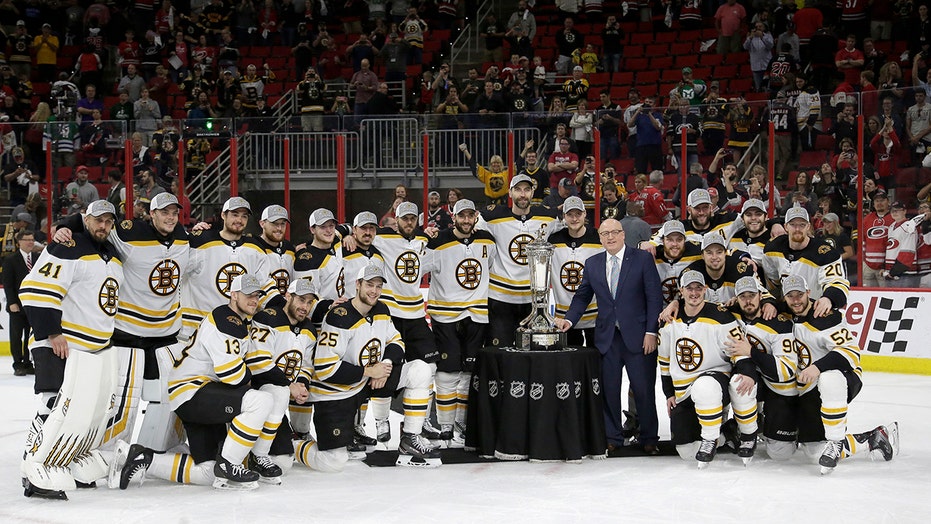 Rask posted his seventh career playoff shutout, and the Bruins swept the Carolina Hurricanes out of the Eastern Conference final, winning 4-0 on Thursday night to reach their third Stanley Cup Final in nine years.

"Everyone in the room wanted to be at their best," forward Brad Marchand said, "and everyone was at their best tonight."

Rask made 24 saves in his second straight series-clinching shutout. Patrice Bergeron scored two goals, David Pastrnak had a goal and two assists and Marchand added an empty-netter. Both Bergeron and Pastrnak scored on second-period power plays.

The Bruins won their seventh straight postseason game — their longest playoff winning streak in nearly half a century — to return to the Cup final after winning in 2011 and losing to Chicago two years later.

"It's so difficult to advance in the playoffs, let alone make it to the final," said Rask, the backup to Conn Smythe Trophy winner Tim Thomas in 2011. "We need to really enjoy this but realize we have a lot of work to do."

On its longest postseason win streak since reeling off nine straight in 1972, Boston earned a break before taking on the West winner. San Jose leads its series with St. Louis 2-1 heading into Game 4 Friday night.

The Bruins won this one without captain Zdeno Chara, who was scratched with an unspecified injury and is day to day, ending a run of 98 consecutive playoff games for the hulking 42-year-old veteran that dated to 2011.

Chara joined his teammates on the ice for the post-series handshake line with Carolina, and while coach Bruce Cassidy declined to elaborate on the nature of Chara's injury, he did say he's expected back for the start of the Cup final.

Curtis McElhinney made 19 saves for the Hurricanes, whose first playoff appearance since 2009 ended precisely the same way their previous postseason trip did — by being swept in the East final.

"Listen, the tank's been low for a long time," captain Justin Williams said. "It's been running on adrenaline and sheer will. It's always tough to swallow when the season ends, just abruptly like that. It's like you're cut real quick. And you've got to go home."

Carolina got this far by sweeping the New York Islanders in Round 2. Not that the extra rest time helped the Hurricanes, or anyone else in these playoffs: No team that swept its opponent has won its next series.

After outscoring them 17-5 in four games, Boston no doubt wants to halt that trend — especially with the sport's biggest prize on the line.

Special teams drove this series, with the Bruins scoring seven power-play goals in the four games while the Hurricanes had five during their entire 15-game postseason run. Boston had at least one power-play goal in every game while Carolina failed to score on its last 13 chances with the man advantage.

So it was no surprise that Boston took control with its best-in-the-playoffs power-play unit.

Eighteen seconds into a minor on the Hurricanes for having too many men on the ice, Pastrnak finished off a slick give-and-go with Marchand, getting past Calvin de Haan and slipping the puck into an open net at 4:46 of the second.

"Everything's going OK, then we get into that specialty area where that's obviously a huge advantage for them," coach Rod Brind'Amour said. "And they made us pay."

With Greg McKegg in the box for goaltender interference, the Bruins scored on another give-and-go involving Pastrnak, who set up Bergeron's goal with 1:26 left in the second.

Rask — who blanked Columbus 3-0 in the decisive sixth game of the previous series — didn't even face a shot on goal for roughly the first half of the third, and only seven for the entire period.

"Tuukka's been very consistent," Cassidy said. "Usually, if you're going to get on a roll, your goaltender's going to have to win a game for you somewhere along the way or steal one for you. ... He can't have a bad night."

McElhinney made his second straight start in place of Petr Mrazek, a move made by Brind'Amour to shake things up after the Hurricanes lost the first two games of the series in Boston by a combined 11-4 score.

That this game was scoreless after 20 minutes was a testament to McElhinney, who came up with several early gems — including robbing Marchand from close range with his glove about 7½ minutes in.

NOTES: D John Moore replaced Chara in the defensive pairing with Connor Clifton. ... With fourth-line forward Chris Wagner back in Boston having his injured right arm examined, C Noel Acciari slid into the lineup for the Bruins for the first time in the series. ... Both teams' general managers — Don Waddell of the Hurricanes, and Don Sweeney of the Bruins — were announced as finalists for the league's GM of the year award. ... Carolina LW Jordan Martinook (lower body) missed a second straight game.

The Bruins have an extended break before the Stanley Cup Final.