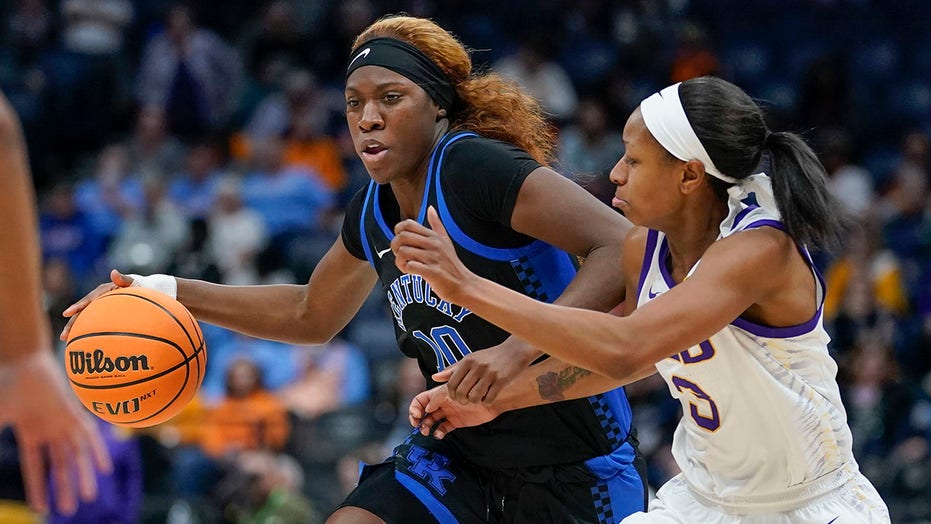 The Kentucky senior became the ninth player in women's basketball history to earn first-team honors three times, getting a spot on the team announced Wednesday.

"That's huge. Definitely selective company. To be a three-time, and one of nine, now that's something you had to work for," Howard said. "I don't know how to explain it. I was glad I was able to accomplish that."

Boston, Clark and Smith were unanimous choices from the 30-member national media panel that votes in the AP Top 25 each week. It was the first time that there has been a tie for the first team since the AP started honoring women's All-Americans in 1995.

The last player to be a three-time All-American was Oregon's Sabrina Ionescu. Boston could join the club next year.

Howard helped Kentucky get on a roll at the end of the regular season and win the SEC Tournament. She averaged 20.6 points this season to go with 7.3 rebounds and 2.4 steals for the Wildcats.

"She is the most versatile player I have ever coached," Kentucky coach Kyra Elzy said. "What sets her apart from everyone else is that she can play every position on the floor and be offensively and defensively exceptional at each."

Kentucky's Rhyne Howard (10) is guarded by LSU's Khayla Pointer (3) in the second half of an NCAA college basketball game at the women's Southeastern Conference tournament Friday, March 4, 2022, in Nashville, Tenn. (AP Photo/Mark Humphrey)

Boston has been dominant on both ends of the floor to help South Carolina go wire-to-wire as No. 1 in the AP poll and earn the top overall seed in the NCAA Tournament. The junior post averaged 16.8 points, 12.0 rebounds and set an SEC record for consecutive games with a double-double.

"Aliyah is a great player, a generational player having an exceptional season because she dedicated her offseason to putting herself in this position," South Carolina coach Dawn Staley said. "Her ability to not just affect but dominate a game every minute she’s on the court is special."

Clark put up eye-popping numbers for the second straight year and became the first female player to lead the country in both scoring and assists. She averaged 27.4 points, 8.1 rebounds and 7.9 assists to help Iowa win both the Big Ten regular season and tournament championships.

"Her repeat selection to such a prestigious team demonstrates her consistency and commitment to growth," Iowa coach Lisa Bluder said. "To lead the country in points and assists for two years is absolutely remarkable."

"NaLyssa is an versatile and elite athlete who excels in the lane but has consistently faced up and knocked down jump shots this season," Baylor coach Nicki Collen said. "She has rebounded and defended at a high level and seems to always play her best in the biggest moments."

Hillmon became the first Michigan player ever to earn first-team honors, a year after being on the second team. She helped Michigan to its highest ranking ever and averaged 21.0 points and 9.4 rebounds.

"She obviously makes such an impact on the court for our program and has helped elevate Michigan women’s basketball," Michigan coach Kim Barnes Arico said. "It’s not what just she does on the court, but it’s also her impact in the community and her ability to continue to use her voice for change that are such a huge part of her legacy at Michigan."

Jones, who was the Most Outstanding Player of the Final Four last year when Stanford won the national championship, averaged 13.1 points, 7.9 rebounds and 3.7 assists this year.

"Haley is a deserving member of the Associated Press’ All-America team," Cardinal coach Tara VanDerveer said. "She affects all facets of a game and can alter the trajectory of a matchup in ways that few others can, while seeming to play her best in the big moments."

Howard, Clark, Boston, Smith and UConn's Paige Bueckers made up the preseason All-America team. Bueckers missed two months with a knee injury, but earned honorable mention honors. This was the first time since 2007 that no UConn players were on an AP All-America team.

The AP second team was headlined by Kansas State's Ayoka Lee, who scored 61 points earlier this season to set a new NCAA women's single-game scoring record. She was joined by Ashley Joens of Iowa State, Aneesah Morrow of DePaul, Khayla Pointer of LSU and Elissa Cunane of N.C. State. It's the third year that Cunane has been either the second or third team.

The AP third team was Virginia Tech's Elizabeth Kitley, Villanova's Maddy Siegrist, Northwestern's Veronica Burton, Stanford's Cameron Brink and Maryland's Angel Reese. It's the first time Virginia Tech, Northwestern and Villanova have had a player on one of the AP All-America teams.