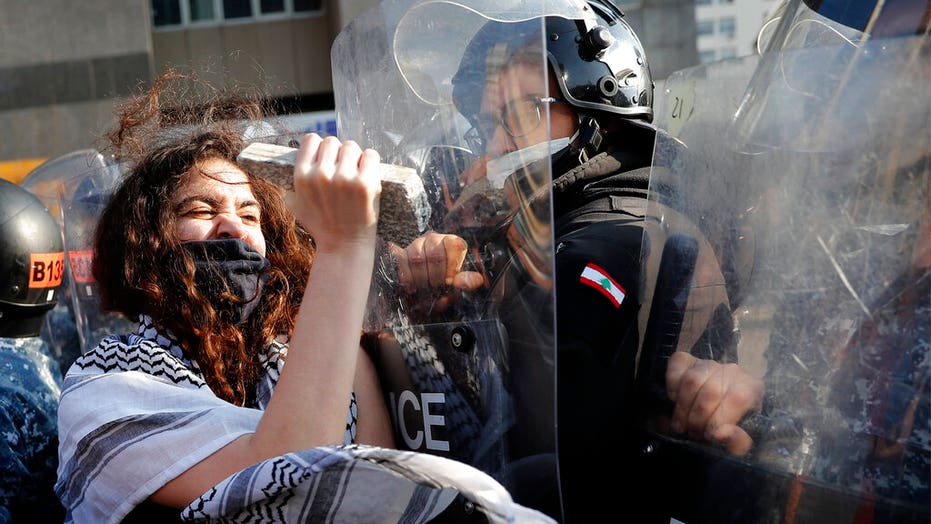 Riots broke out in Lebanon’s second-largest city Tuesday, threatening to renew nationwide protests over growing poverty and further cripple an economy already in freefall from the coronavirus pandemic.

Clashes in Tripoli erupted after a tense funeral was held for a 27-year-old man killed during overnight riots. Fawwaz Samman was shot by soldiers during confrontations that began Monday night, and he died in a hospital hours later.

An anti-government protester uses stone to beat on the shield of a riot policeman, during a protest against the deepening financial crisis, in Beirut, Lebanon, Tuesday, April 28, 2020.  (AP)

Tripoli is one of the most neglected and poorest regions in Lebanon. The violence reflected the rising poverty and despair gripping the country amid a crippling financial crisis that has worsened since October, when nationwide protests broke out because of widespread corruption and mismanagement of resources.

A lockdown to stem the spread of COVID-19 has thrown tens of thousands of people out of work, further aggravating the economic crisis.

In Tripoli, dozens of protesters hurled Molotov cocktails, setting off blazing fires in at least two banks. Troops deployed quickly in the area to try to prevent further riots, occasionally firing rounds of tear gas to disperse the protesters.

Riots intensified in the afternoon with protesters setting two police vehicles ablaze as the army brought more reinforcements into the area to try to bring the situation under control. Soldiers chased protesters through the streets after they threw stones at troops. Other soldiers fired tear gas and rubber bullets.

Reacting to the clashes, U.N. spokesman Stephane Dujarric said in that the world body urges protesters to "exercise their right to protest peacefully and security personnel to protect peaceful protests and to act proportionally in maintaining law and order."

In a statement about the overnight riots, the Lebanese army said, "Troublemakers who had infiltrated the protesters to attack banks" also threw firebombs and grenades at the military, setting a military vehicle on fire. It said 54 troops were injured across the country and that the army detained 13 people.

As of Tuesday, Lebanon has confirmed at least 717 cases of the novel coronavirus with 24 deaths.