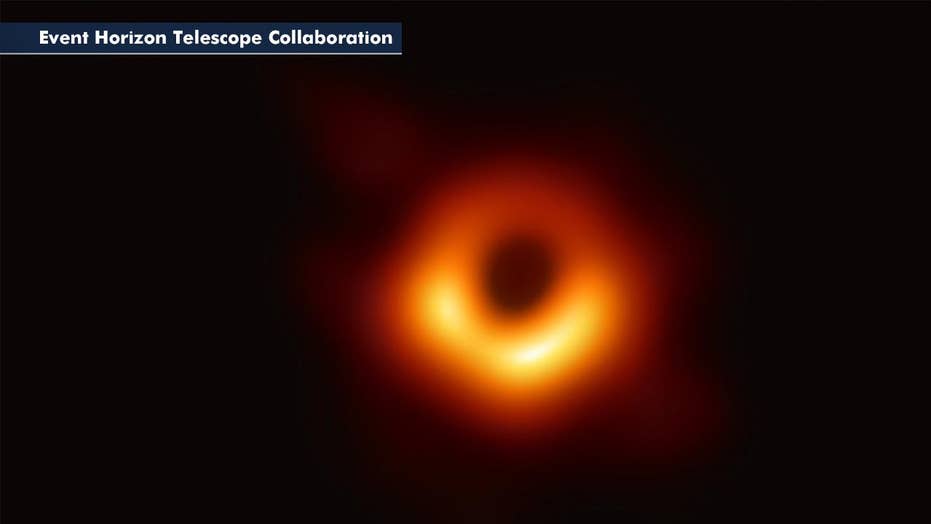 Scientists reveal the first-ever image of a black hole

Former NASA astronaut Mike Massimino explains what can be learned from the groundbreaking discovery.

From the first-ever image of a black hole to strange occurrences on Mars to the Apollo 11 anniversary and the latest attempts to land on the moon, 2019 has been a busy year in space.

In April, scientists released the first-ever image of a black hole, revealing the distant object in stunning detail.

The black hole was spotted in galaxy Messier 87 (M87), 55 million light-years away from Earth. A light-year, which measures distance in space, equals 6 trillion miles.

"We're delighted to report to you ... that we have seen what we thought was unseeable," explained Shep Doeleman, Ph.D., director of the Event Horizon Telescope, during an April press conference at the National Science Foundation. "We have taken advantage of a cosmic opportunity."

In this July 20, 1969 photo made available by NASA, astronaut Buzz Aldrin, lunar module pilot, walks on the surface of the moon during the Apollo 11 extravehicular activity.

On July 20, 1969, millions of people around the world watched on TV as Apollo 11 astronaut Neil Armstrong took his historic step into the pages of history. Half a century later, the world once again celebrated the audacious mission.

Events were held across the globe to celebrate the 50th anniversary of the moon landing. Speaking at Kennedy Space Center, Vice President Mike Pence announced that the Orion capsule that will take American astronauts back to the moon is ready.

The Artemis program will land American astronauts on the moon by 2024 and establish a sustainable human presence on Earth’s natural satellite. Artemis will also make history by landing the first woman on the moon.

Apollo 11 astronaut Michael Collins recounted his experiences on the epic mission to Fox News, describing his time in space and the crew’s quarantine on their return to Earth.

In September, the International Astronomical Union said the comet likely originated from another system. Separately that month, NASA JPL said 2I/Borisov was approximately 260 million miles from the sun. It reached its closest point, known as perihelion, on Dec. 8, 2019, when it got within 190 million miles of the sun.

A study published in October suggested that Comet 2I/Borisov could be carrying water on it from beyond the solar system. If the findings are accurate, it would be the first time water from outside the solar system has been detected.

2I/Borisov is the second interstellar object discovered, following the mysterious cigar-shaped Oumuamua, which was discovered in October 2017. Unlike its predecessor, Comet 2I/Borisov will be observable for an extended period of time.

The discovery of 2I/Borisov and the fact it is a comet has added to the mystery of Oumuamua. Some have theorized it may have been a light sail sent from an intelligent extraterrestrial civilization, a comet or an asteroid.

While NASA wants to send astronauts to Mars in the 2030s, the space agency is making some incredible finds on the Red Planet now, including some it can't quite explain.

Four months after the stunning announcement that NASA's Curiosity rover detected an "unusually high" level of methane on Mars, the government space agency said in November that oxygen "behaves in a way that so far scientists cannot explain."

The Curiosity rover, which has been exploring the Gale Crater since it landed on Mars in August 2012, has been analyzing the air using the Sample Analysis at Mars (SAM) instrument. It found that the oxygen in the atmosphere did not behave in the same way that nitrogen and argon did, rising by as much as 30 percent in the spring and summer and dropping in the fall.

NASA believes the oxygen mystery is related to the methane mystery. In a statement released in June, the space agency confirmed that the rover measured the largest level of methane, 21 parts per billion units by volume since landing on the Red Planet on Aug. 6, 2012.

On Earth, methane is produced both from biological and geological sources, but NASA warned in June that it was unsure where the methane was coming from or how old it was.

In December NASA also revealed a fascinating “treasure map” of where water ice may be found just below the surface of Mars.

CHINA LANDS ON THE DARK SIDE OF THE MOON

2019 began with a historic moon landing. When its Chang'e 4 probe reached the lunar surface on Jan. 2, China became the first country to land on the far side of the moon.

The moon's far side is also known as the dark side because it faces away from Earth and remains comparatively unknown, with a different composition from sites on the near side, where previous missions have landed.

APOLLO ASTRONAUT REVEALS WHAT IT'S LIKE TO WALK ON THE MOON: 'MOST BEAUTIFUL TERRAIN I'D EVER SEEN'

The probe captured a stunning panoramic picture of the far side of the moon.

The mission demonstrates China’s growing ambitions as a space power to rival Russia, the European Union and the U.S.

In 2013, China became just the third country, after the U.S. and the former Soviet Union, to successfully “soft land” on the moon when its Chang'e 3 lander reached the lunar surface.

Beresheet snapped this selfie moments before communication with the spacecraft was lost. (SpaceIL/Israel Aerospace Industries)

Beresheet crashed into the lunar surface on April 11. The spacecraft experienced an engine problem seconds before it was expected to reach the moon. It was just a few hundred feet above the lunar surface when Mission Control in Yehud, Israel, lost contact with the probe.

Beresheet, which is Hebrew for “in the beginning,” was developed by the Israeli nonprofit SpaceIL and the state-owned Israel Aerospace Industries. SpaceIL and IAI said that a manual command caused the crash. Without the main engine working correctly, controllers were unable to slow Beresheet down as it approached the lunar surface.

Just days after the crash, SpaceIL Chairman Morris Kahn announced Beresheet 2, a second attempt to land on the moon.

"This is part of my message to the younger generation: Even if you do not succeed, you get up again and try," he said, in a statement.

India also failed in its attempt to land an uncrewed probe on the moon. The Indian Space Research Organization lost contact with the Vikram lander when it was in the final stage of a moon landing attempt on Sept. 6, just 1.3 miles from the lunar surface.

India's first lunar mission, Chandrayaan-1, orbited the moon in 2008 but did not land there. It did, however, launch an impact probe that was intentionally crashed into the moon.

NASA released details of its vision for the Artemis moon lander that will return U.S. astronauts to the lunar surface.

In July, NASA said it was seeking “proposals from industry for the development of integrated human lunar landers and execution of crewed flight demonstrations to the lunar surface by 2024,” according to a notice posted to the Federal Business Opportunities website.

APOLLO 13 ASTRONAUT FRED HAISE RECOUNTS ILL-FATED MISSION: 'WE NEVER GOT TO THE EDGE OF THE CLIFF'

In documents posted on the FBO website, NASA explained that astronauts will be flown in an Orion spacecraft to the ‘Gateway,’ a space station orbiting the moon. The Gateway vessel will be used to support the transfer of crew and supplies into the moon lander.

In October NASA also unveiled its plan to send a new lunar rover, VIPER, to the surface of the moon.

In this photo provided by NASA astronauts Christina Koch and Jessica Meir exits the International Space Station on Friday, Oct. 18, 2019. (NASA via AP)

NASA astronauts Christina Koch and Jessica Meir made history with the first all-female spacewalk in October. The spacewalk was Meir’s first and Koch’s fourth.

"We have the right people doing the right job at the right time," he said. "They are an inspiration to people all over the world including me. And we're very excited to get this mission underway."

“You are an inspiration to women & girls across America,” tweeted House Speaker Nancy Pelosi, D-Calif.

When Meir ventured outside the orbiting space lab, she became the 228th person in the world to conduct a spacewalk and the 15th woman.

NASA originally wanted to conduct an all-female spacewalk last spring but did not have enough medium-size suits ready to go.