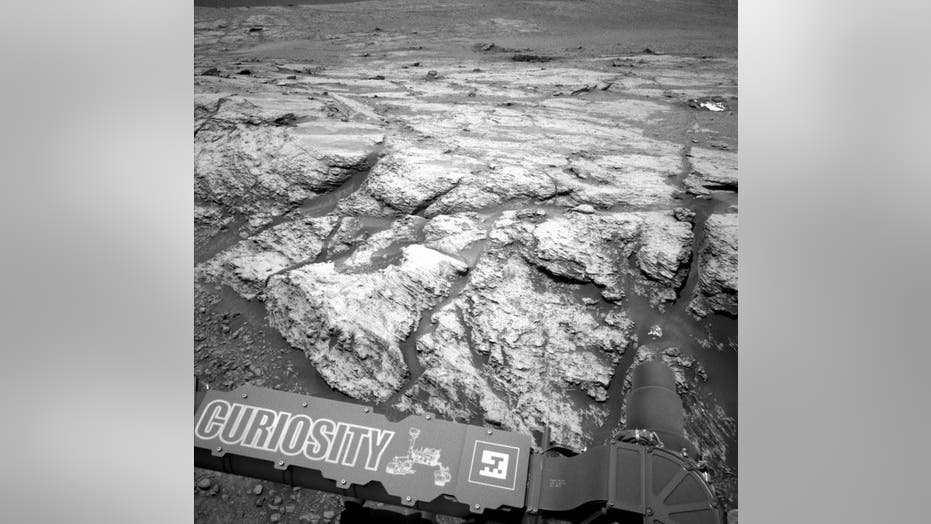 NASA’s Curiosity rover has detected a surprising spike in the level of methane on Mars.

In a statement released Sunday, the space agency confirmed that last week, the rover measured the largest level of methane, 21 parts per billion units by volume (ppbv), since landing on the Red Planet on Aug. 6, 2012.

On Earth, methane is produced both biologically and geologically, although it is not clear what caused the methane spike on Mars.

"With our current measurements, we have no way of telling if the methane source is biology or geology, or even ancient or modern," said SAM Principal Investigator Paul Mahaffy of NASA's Goddard Spaceflight Center in the statement.

The New York Times reported Saturday that sunlight and chemical reactions would break up any methane in Mars’ thin air “within a few centuries,” adding that the newly-detected spike was likely released recently. The Times report cited an initial statement from NASA on Saturday that called the spike an “early science result.”


This image was taken on June 18, 2019, by the left Navcam on NASA's Curiosity Mars rover. The was captured on the 2,440th Martian day, or sol, of the mission. (Credits: NASA/JPL-Caltech)

Nonetheless, the methane spike offers scientists valuable insight into the Red Planet. “It's exciting because microbial life is an important source of methane on Earth, but methane can also be created through interactions between rocks and water,” explained NASA, in its statement.

The mission had already determined that background levels of methane peak during the Red Planet’s northern summer, according to Space.com.

The Mars methane spike has surprised experts. Researchers, for example, used Curiosity’s onboard laboratory to “sniff” methane in the Martian atmosphere 12 times over a 20-month period that ended in 2014. “During two of those months, in late 2013 and early 2014, four measurements averaged seven parts per billion,” said NASA in a 2014 statement. “Before and after that, readings averaged only one-tenth that level.”

THERE IS DEFINITELY METHANE ON MARS, SCIENTISTS SAY. BUT IS IT A SIGN OF LIFE?

Sudden spikes of methane have also been recorded, but scientists don’t know how long these “transient plumes” last or why they differ from seasonal patterns.

“One ppbv means that if you take a volume of air on Mars, one billionth of the volume of air is methane,” explained NASA. By 2017, the global annual mean of methane on Earth had reached 1,850 ppbv, according to the World Economic Forum, an increase of 75 ppbv in the period between 2007 and 2017.

Armed with data from the methane spike, scientists will be taking many more methane measurements, as well as working with the European Space Agency’s ExoMars Trace Gas Orbiter. The orbiter, a joint project of the ESA and Russian space agency Roscosmos, has been orbiting Mars for just over a year. The orbiter, however, did not measure any methane during its first year in orbit, much to the surprise of scientists.

“Combining observations from the surface and from orbit could help scientists locate sources of the gas on the planet and understand how long it lasts in the Martian atmosphere,” said NASA, in the statement. “That might explain why the Trace Gas Orbiter's and Curiosity's methane observations have been so different.”

The Red Planet continues to be a source of fascination. The Curiosity rover, for example, recently released captured a photo that showed a strange white light on Mars. NASA told Fox News that the anomaly is “likely the effect of the Sun.”

Scientists recently announced the discovery of layers of ice buried a mile beneath Mars’ north pole that could help unlock the Red Planet’s history.

Experts from the University of Texas at Austin and the University of Arizona harnessed the Shallow Radar on NASA’s Mars Reconnaissance Orbiter to make the discovery. The ice, they say, could be the remains of ancient polar ice sheets and could be one of Mars’ largest reservoirs.

Last year, in a major announcement, NASA revealed that the Curiosity rover had found organic molecules on Mars.

TRUMP SENDS SURPRISING TWEET, SAYS NASA 'SHOULD NOT BE TALKING ABOUT GOING TO THE MOON'

In November, NASA announced that it has selected the location where its Mars 2020 rover will land on the Red Planet. The rover is expected to reach the Martian surface on Feb. 18, 2021.

NASA’s long-term goal is to send a manned mission to Mars in the 2030s. However, former astronaut Buzz Aldrin thinks that a slightly later target date of 2040 is more realistic.

In an interview in 2016, the Gemini 12 and Apollo 11 astronaut told Fox News that by 2040, astronauts could visit Mars’ moon Phobos, which could serve as a sort of stepping stone to the Red Planet.