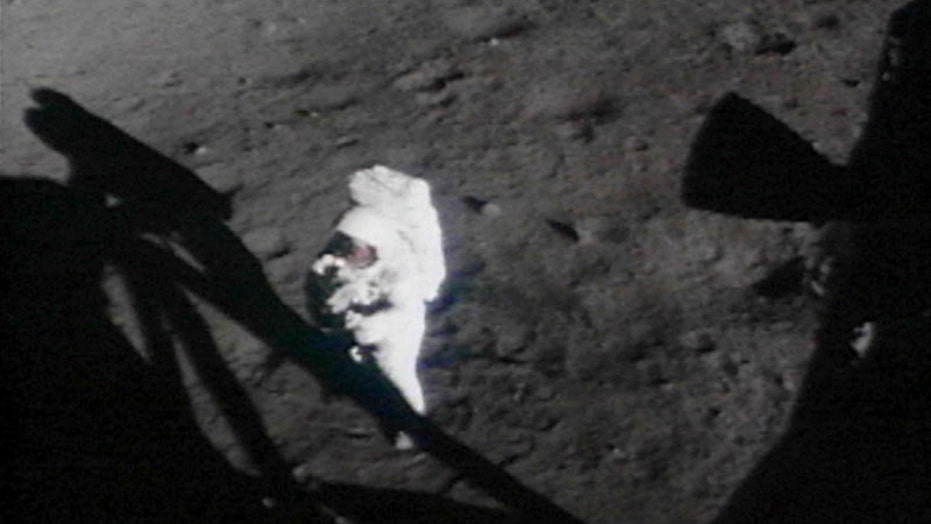 On July 20, 1969, Neil Armstrong’s sons Mark and Rick were at the family home in Houston watching on TV as their father stepped off the Eagle lunar module and into the pages of history.

Mark, who was 6 at the time, said their home was a hive of activity on the day of the Apollo 11 Moon landing.

“We had two televisions in the house, so folks were huddled around both of them, some in the living room and some in one of the bedrooms, I think,” he told Fox News. “Friends, family, neighbors, they were all coming in and out. And, of course, we had the squawk box, as well, which I believe was set up in the bedroom at the time, so we could hear what was happening, more so than most.”

THERE WAS A BIT OF TENSION': ASTRONAUT DESCRIBES WATCHING MOON LANDING WITH BUZZ ALDRIN’S FAMILY

It wasn't just the Armstrongs and their friends who watched with rapt attention. An estimated 650 million people around the world watched the Moon landing on TV, according to NASA.

Mark, who spoke at a Smithsonian Channel event in New York City celebrating the 50th anniversary of the Moon landing, explained that while it was an exciting day, he didn’t understand its importance until much later. “When you’re that age, you don’t really understand the historical context of things,” the now 56-year-old said. “You can see it and feel it, you can feel the energy in the room and you can feel the amazement in the people around you, but you don’t really understand why they are so amazed until you grow up a little bit and you learn those things later in life.”

Rick was 12 years old when his father stepped out of the Eagle lunar module and famously proclaimed “One small step for a man, one giant leap for mankind.”

“When he stepped off, nobody in the room heard what the words were because they were all ‘what did he say?’” Rick told Fox News. “I heard it, and I said ‘something about a small step,’ but at the time, it wasn’t at all clear what was going on, I always remember that.”

U.S. Astronaut Neil Armstrong turns towards the lunar module on the moon in this handout photo from NASA. (REUTERS/NASA/Handout)

The brothers recounted that in the weeks leading up to the Moon landing, their mother Janet was careful to insulate them from the tension surrounding the epic mission. “Our mother was obviously worried, but we did not see that, as her children. It just seemed like normal days for us in the weeks before,” Mark said.

His brother notes that their mother's strength and stoicism was typical of an astronaut's wife.

“The risk, that part, I think was always downplayed to the kids, not just [by] her, but I think that all the wives did that, try to keep life as normal as possible for the kids so that they didn’t worry,” added Rick.

Their father also instilled confidence in them in the weeks leading up to launch. “What was discussed was that Dad said he’s going on a flight, they have a lot of confidence in the mission, they have confidence in the spacecraft and they feel like they’re ready to go,” said Mark. “For us, that just seemed like, ‘OK, Dad seems very confident, so we’re not going to worry.’”

Both boys and their mother were at Cape Canaveral, which was then known as Cape Kennedy, on July 16, 1969, to watch their father, Buzz Aldrin and Michael Collins launch into space atop a huge Saturn V rocket. More than 1 million people are estimated to have watched the launch in the immediate area around Kennedy Space Center.

“We didn’t really see all the people,” said Rick, who had to miss an all-star game for his Houston Little League to attend the launch. “I can’t remember exactly where we were staying, but we watched it off of a boat. So we weren’t around all the people and didn’t see the masses that were there, as I recall.”

From the deck of a boat, Janet Armstrong and her sons Mark and Rick, watch the launch of NASA's Apollo 11 mission to the moon, commanded by her husband, astronaut Neil Armstrong, Cape Canaveral (then known as Cape Kennedy), Florida, July 16, 1969. (Photo by Vernon Merritt III/The LIFE Picture Collection/Getty Images)

“A Saturn 5 launch is an amazing thing, that was really what the focus was, what I remember from it, was just seeing that in person,” he added.

“When you see the film of the launch, you see it from the front, we were on the side,” said Mark. “Because we were on the side, there was this huge billow of smoke that came out to the sides of the launchpad. And we were over there, all we saw was smoke for what seemed like an eternity. And eventually, you know, way up, this spacecraft just went right above the smoke and up into the sky, it was an amazing thing.”

Some 50 years after their father, Aldrin and Collins made history, the brothers are keenly aware of the impact of Apollo 11.

Neil Armstrong is shown beside the Lunar Module. Also visible are the U.S. flag and the solar wind experiment which was flown on all the Apollo missions. (Photo by SSPL/Getty Images)

“The inspiration that people from all over the world got from that program to me, that is the legacy of Apollo,” Rick told Fox News.

“I think it’s more than the Apollo 11 astronauts. There’s some 400,000 people that worked on that program and every one of them wanted to do the best job that they could,” said Mark. “They didn’t want to be the weak link in the chain, so every one of them did their part and that’s why the project was successful, and I think well ahead of its time, certainly from a technology standpoint.”

“It was an amazing achievement and a great thing that we did in this country,” he added.

Commander Neil Armstrong climbs down the ladder of the Lunar Module (LM) the 'Eagle' to become the first man to set foot on the Moon, during NASA's Apollo 11 lunar landing mission, July 1969. Video footage taken during the mission. (Photo by Space Frontiers/Getty Images)

A footprint from the Apollo 11 mission on the lunar surface. (Photo by NASA/Newsmakers/Getty)