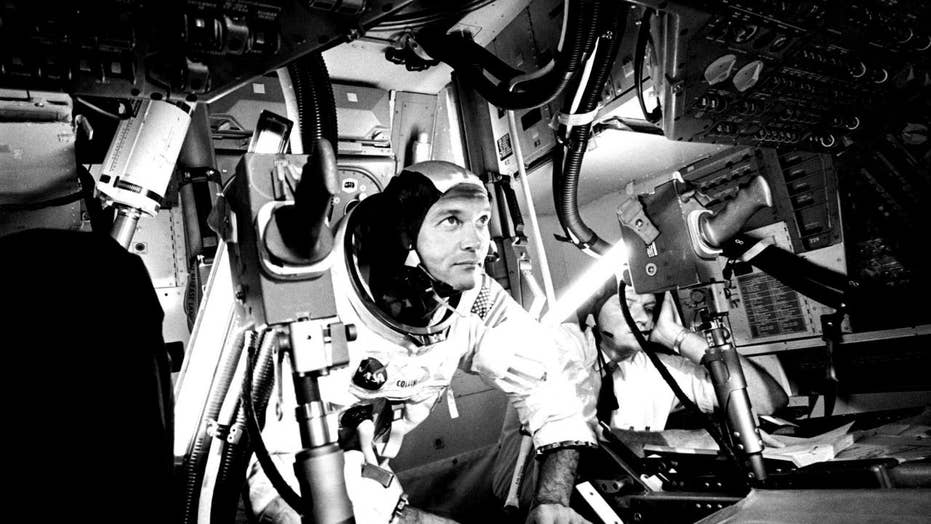 For someone who has been nearly 240,000 miles above our planet, Apollo 11 astronaut Michael Collins is extraordinarily down-to-Earth.

Along with Neil Armstrong and Buzz Aldrin, Collins was part of the most famous space exploration mission in history, but the now-88-year-old simply sees it as doing the job asked of them.

"You have to come to NASA with certain qualifications," Collins said in an interview with Fox News. "I was an accredited pilot, which helped reduce the size of the available population. There were 18,000 applicants, and there was no way in hell I could have worked for NASA facing that kind of math," Collins added jokingly.

Born in Rome, Italy, on Halloween in 1930 to James and Virginia Collins, Michael had an unusual upbringing. As the son of a career-long Army officer, his family would move around often, stopping in places like Oklahoma, Governors Island, NY, San Antonio, Texas, and several other areas. When the U.S. entered World War II, the Collins family made their way to Washington D.C., and Michael ultimately followed in his family's footsteps, joining his father, brother and several other family members in the armed services.

Collins graduated from West Point in 1952 with a Bachelor of Science in military science. He joined the U.S. Air Force, where he spent the better part of a decade going on various missions, before joining NASA in 1963, two years after President Kennedy gave his famous "Moon speech" at Rice University.

Despite his impressive background, Collins said being a part of the Apollo program left him feeling behind.

"We would go around to different parts of the country to where the different parts of the Apollo craft [were] being made, especially Southern California and Long Island," Collins said, adding the astronauts did what they could to help with the machines building the craft. "It was a lot of traveling, and we were stationed in Houston, so we were always busy. I always felt a little behind and slower than we needed to be with the information we were presented with."

As any history book will tell you, NASA was successful in its mission testing. On that fateful day, July 16, 1969, Collins, along with Armstrong and Aldrin, was rocketed into space as America and the world looked on. When the Eagle module landed on the Moon on July 20, 1969, and Armstrong and Aldrin became the first two men to walk on the lunar surface, the nation let out a collective cheer for the three astronauts.

"Being close to the Moon was wonderful, but looking at Earth, it was this tiny little thing, blue and white and very shiny," Collins, who was the Command Module pilot on the flight, said. "It projected an aura of great fragility and the more you dig into it, the more you realize how fragile it really is."

They would later become national heroes -- a description that made them uneasy, especially Collins.

"We knew that we had the best test flights, and we performed them well, but heroes? No," Collins said when asked when it finally hit them they were an inspiration to a country rocked by political and social upheaval.

"We didn't do anything above and beyond the call of duty. We did what we had been hired to do," he added. "It may have been tremendous and unusual, but I think it's a disservice to people who are hard-working people, like nurses and doctors and the like, who deserve to be heroes. We're just regular astronauts."

Though he is reluctant to be called a hero, Collins does admit the three men did alter the country's mood at a time when upheaval and unrest were as American as apple pie.

"In general, I think we brought the goodwill of Americans with us, and they flew off to the Moon with us," Collins said. "It was something the country wanted to feel proud of, and we had a good relationship with the citizens of America."

"Being close to the Moon was wonderful, but looking at Earth, it was this tiny little thing, blue and white and very shiny. It projected an aura of great fragility, and the more you dig into it, the more you realize how fragile it really is."

His modesty notwithstanding, Collins, along with the rest of the Apollo 11 crew, was a recipient of the Presidential Medal of Freedom with Distinction from President Nixon in 1969 at the state dinner in their honor. Collins also said that the call that Nixon made after Apollo 11 had landed was "unexpected," but it was nonetheless "well-delivered and well-received."

In 1970, upon being presented with the Hubbard Medal from the National Geographic Society, Vice President Spiro Agnew told the trio they had "won a place alongside Christopher Columbus in American history."

Befittingly, Collins has a lunar crater named after him (as do Armstrong and Aldrin) and even has his own asteroid: 6471 Collins.

For all of his accomplishments, Collins does have regrets about his career, notably the fact he never walked on the Moon.

"I'd be a liar or a fool if I said I had the best seat. I did not," Collins told Fox News. "But I was happy with the seat I did have. It was the culmination of what JFK told us to do, and by golly, we were going to do it. If I was trailing behind on a rope, sure. I wish I walked on the Moon, but, in general, I was delighted with the seat that I did have."

Collins is hopeful the renewed interest in space is not like previous efforts, citing involvement from two of Silicon Valley's biggest chieftains--Amazon CEO Jeff Bezos and Tesla CEO Elon Musk--who are also at the helm of space exploration companies, Blue Origin and SpaceX, respectively.

Joking about how he would like a "big chunk of Musk and Bezos money," Collins said he has been "impressed" by Bezos, having met the Amazon leader several times. While Collins has yet to meet Musk, he did note both are "a positive force on the national scene" and believes the two of them, along with the federal government, are a force for good for space exploration.

"I say to those two billionaires: Jump in and the three of you [including the American taxpayer] can do great things together," Collins said. "I think that's wonderful."

In this July 20, 2009, photo, Buzz Aldrin, left, Michael Collins, center, and Neil Armstrong stand in the Oval Office at the White House in Washington, on the 40th anniversary of the Apollo 11 moon landing. (AP Photo/Alex Brandon)

When asked whether the Trump administration's decree to return astronauts to the Moon by 2024 was feasible, Collins said no.

"I doubt the Trump statement is possible," Collins noted. "I'm not sure he's considered going to the Moon or Mars in any great detail."

Collins, 88, now spends most of his time in the southwestern part of Florida. His two daughters, Kate, an actress best known for her role on "All My Children", and Ann take care of him. He tries to keep in touch with Armstrong's family and Aldrin but confesses he isn't the best at it. When reflecting, Collins said he could not think of a better choice among the potential 30 candidates who were being considered for the first lunar landing crew.

"Neil was a test pilot, flying the X-15 rocket," Collins said. "He was close to heads and shoulders above the rest, and Buzz, in [a] similar fashion, was as well. He was a good student and a Ph.D. from MIT who did his doctoral dissertation in rendezvous and docking, so he fit right into the things that NASA was looking for."

"If I were picking two out of that 30, I couldn't think of anyone who could quite equal them. It was a wonderful selection," Collins added.