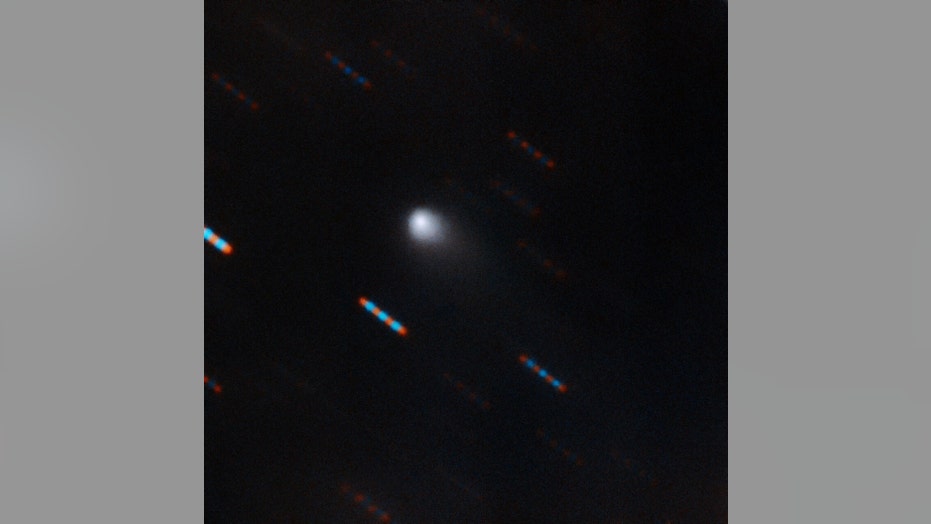 A shocking new study suggests that the second interstellar object ever discovered, Comet 2I/Borisov, could be carrying water on it from beyond the Solar System.

The study suggests that 2I/Borisov, discovered on Aug. 30 by astronomer Gennady Borisov, is releasing water vapor on its journey.

"Using a simple sublimation model we estimate an H2O active area of 1.7 km2 [0.65 miles squared], which for current estimates for the size of Borisov suggests active fractions between 1-150 [percent], consistent with values measured in Solar System comets," the study's abstract states. It is common for asteroids in the Solar System to carry water.

The study was submitted to The Astrophysical Journal Letters and can be read on the arXiv repository,

"The discovery of interstellar comet 2I/Borisov provides an opportunity to sample the volatile composition of a comet that is unambiguously from outside our own Solar System, providing constraints on the physics and chemistry of other protostellar discs," the researchers wrote in the paper.

Although 2I/Borisov, which has a familiar look to it, does not emit its own light, researchers from NASA's Goddard Space Flight Center used light spectrums to make their observation.

Adam McKay, the study's lead author, said that the potential discovery of water could give insight into other systems. “Are we special as a planetary system or are a lot of planetary systems like ours?” he said in an interview with New Scientist. “That has implications for the origin of life, and how common life is throughout the universe.”

If the findings are accurate, it would be the first time water from outside the Solar System has been detected. NASA's Planetary Defense Officer and Program Executive of the Planetary Defense Coordination Office, said the paper represents "credible findings" as the agency continues to hunt for life outside this planet.

"NASA, in collaboration with the international science community, studies comets and asteroids because they represent a valuable opportunity to learn more about the origins of our solar system," Johnson said in a statement obtained by Fox News. "In addition to detecting any potential threat some may pose to Earth, they may be the source of water on our planet and even the origin of organic molecules that lead to the development of life."

A separate study published last year suggested that comet-like objects could be "ferrying" microbial life across thousands of light-years.

Unlike the first interestelar object found, the cigar-shaped Oumuamua, 2I/Borisov has a "cometary appearance," according to images taken on Sept. 10 and Sept. 13 by the William Herschel Telescope and Gemini North Telescope.

Two-color composite image of comet 2I/Borisov captured by the Gemini North telescope on 10 September 2019. The image was obtained with eight 60-second exposures, four in green and four in red bands. (Credit: Gemini Observatory/NSF/AURA)

The interstellar object is comprised of dust, its morphology described as "unremarkable" and it likely has a diameter of about 2.4 miles (2 kilometers), similar to other comets in the Solar System, according to a separate study, published in Nature Astronomy

Last month, NASA JPL said 2I/Borisov was approximately 260 million miles from the Sun and will reach its closest point, known as perihelion, on Dec. 8, 2019, when it gets within 190 million miles of the Sun. Unlike Ouamuamua, it will be observable for an extended period of time, an idea that has excited astronomers.

Earlier this month, NASA's Hubble Space Telescope captured images of 2I/Borisov when it was about 260 million miles away.

Oumuamua was first discovered in October 2017 but was no longer observable by telescopes as of January 2018. Many have speculated what the object is, with some theorizing it may have been a light sail sent from an intelligent extraterrestrial civilization, a comet or an asteroid.

The mystery about its exact nature deepened late last year when NASA said it was looking at the object for two months and did not originally see it.