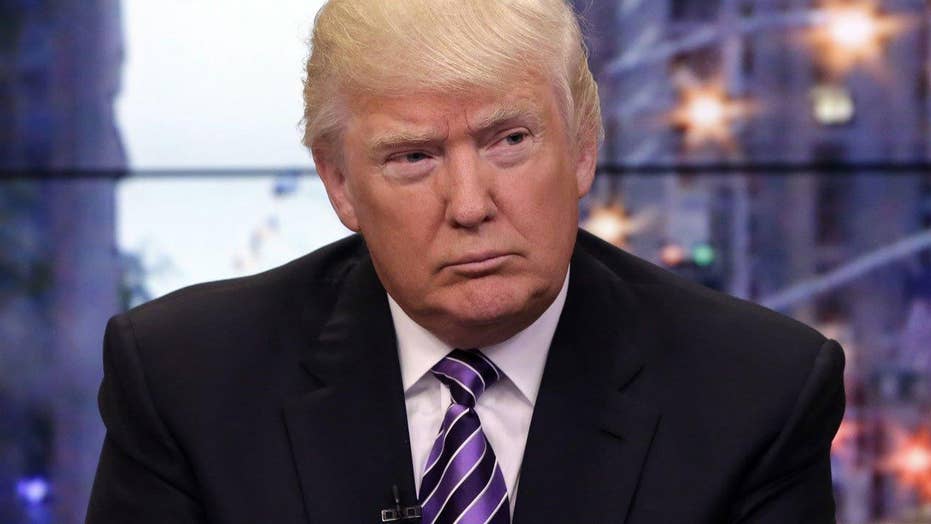 The battle between Donald Trump and the media

Donald Trump launched his campaign one year ago, and has been running against the “dishonest” and “sleazy” media ever since.

Now he’s opened a new front by yanking the credentials of the Washington Post.

The tactic isn’t new: Trump has already barred Politico, the Des Moines Register, the Daily Beast and Buzzfeed, along with outlets that oppose him for ideological reasons, National Review and the Huffington Post. Sometimes it’s an offending story, sometimes an editorial.

In the Post’s case, it was a headline.

The fact that it was a bad headline doesn’t justify the ban. It was written by one person for the paper’s website. Trump has criticized other Post stories, but overall seems to have had cordial relations with the paper, and sat for a grilling with its editorial board, which has been harshly critical of him. Few reporters have talked to Trump as much as the Post’s Robert Costa.

Trump’s anger at the Post was on display after the paper questioned why some of his touted donations to veterans’ groups hadn’t been completed, and he called that news conference and teed off on the press.

But the billionaire has been much harsher in denouncing the New York Times, especially after the story about his past conduct with women. He spent months fighting with Fox News, even skipping one of its debates, and now says CNN is distorting his remarks. He spent months appearing on “Morning Joe” but now says the Scarborough show has gone off “the deep end.”

Except that he didn’t. Under the worst interpretation of Trump’s comments, he was insinuating that the president sympathized with terrorists. Indeed, the Post story was well within bounds, saying that Trump “seemed to repeatedly accuse President Obama on Monday of identifying with radicalized Muslims who have carried out terrorist attacks.”  But the headline was not.

In announcing the ban, Trump said:  “We no longer feel compelled to work with a publication which has put its need for ‘clicks’ above journalistic integrity. They have no journalistic integrity and write falsely about Mr. Trump.” He went on to take his usual shot, without offering evidence, that the paper’s owner, Amazon founder Jeff Bezos, is using the Post as a political tool.

Marty Baron, the Post’s executive editor (and portrayed in the movie “Spotlight” as the crusading editor whose Boston Globe broke the church sexual abuse scandal), responded forcefully, calling the move “nothing less than a repudiation of a free and independent press. When coverage doesn’t correspond to what the candidate wants it to be, then a news organization is banished.” Baron said the Post, whose reporters are writing a book about The Donald, would continue to cover him “honorably, honestly, accurately, energetically and unflinchingly.”

It’s a common tactic for angry candidates to cut off interviews to offending news outlets, or feed scoops to their rivals. But revoking credentials gets the First Amendment movement up in arms.

Some folks have noted online that even at the height of Watergate, Richard Nixon didn’t attempt to revoke the paper’s credentials (which are awarded by the White House Correspondents Association). He did something worse, trying to get federal regulators to yank the company’s lucrative television license.

So what does Trump accomplish here? It’s not like the Post is going to stop covering him aggressively. The practical effect is that he makes it hard for the paper’s reporters to follow him around the country, and they have to try to walk into public events with the general crowd rather than being escorted into the press section. The Trump campaign has ejected a Politico scribe from reporting from the audience on at least one occasion.

What Trump does is send a message and score points with his base, which doesn’t like or trust the press. It is also something of a brushback pitch against other news outlets. The flip side is that he looks a bit thin-skinned.

The escalation comes as the media coverage of Trump turns more aggressive, more skeptical, and in some cases more tendentious.

“In a speech laden with falsehoods and exaggeration, Trump was antagonistic and pugnacious, in stark contrast with his Democratic opponent, Hillary Clinton, who also spoke Monday about combating terrorism.”

The examples? Trump called the Orlando killer an “Afghan,” when he was born in Queens. He also said the U.S. is “not screening” refugees, who the paper says undergo a rigorous vetting process that can take up to two years.

And the Post said Trump “wrongly claimed that Clinton wanted to abolish the Second Amendment.” She does not, but does that fall into the category of embellished political rhetoric? Are the same standards applied to Clinton when she casts Trump’s positions in the worst possible light? Is his talk of temporarily banning Muslims capitalizing on a tragedy, while her talk of tougher gun control is reported as just plain common sense?

The Republican nominee, who has also called for looser libel laws, has every right to push back against what he views as unfair coverage. But this is a case where he overreacted to a terrible headline and gave the impression that he’s willing to block the press from doing its job.