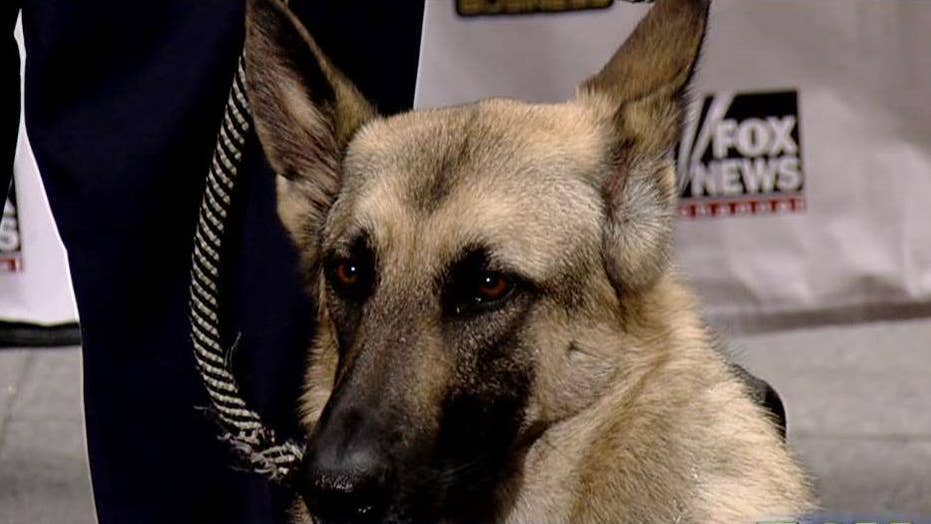 Marine Corps veteran Cole Lyle wants to help give his fellow service members a sense of purpose again — one dog at a time.

Over the past few years, Lyle, 27, has devoted much of his time to meeting with lawmakers and testifying before Congress, aiming to change how the Department of Veterans Affairs serves its vets. The result: the House is reconsidering the PAWS Act.

The PAWS Act — or Puppies Assisting Wounded Servicemembers Act of 2017 — was reintroduced last month and would implement a pilot program to allow for the VA to provide service dogs to veterans with a mental disability such as post-traumatic stress disorder, a service the government doesn’t already provide.

According to the VA’s website, service dogs are provided to veterans “to do specific tasks for a person that he or she cannot do because of a disability,” such as, pick things up, guide a visually-impaired veteran or help someone who has fallen.

But with the rapid rise of suicide and opioid dependency among veterans, it’s important to change that, Lyle told Fox News.

“As a nontraditional treatment, this has no negative effects,” Lyle said of service dogs. “The veteran community has been absolutely beat up by the opioid epidemic. A lot of veterans have been committing suicide due to exasperating symptoms because of opioids.”

“As a veteran, I know the toll that it takes on some of these guys who have done three, four, five deployments,” DeSantis, 38, said. “That’s just not a normal thing to do for a human being, and there’s going to be invisible scars that are left by that. It’s an important issue to deal with.”

Here’s a breakdown of the PAWS Act and how it could help veterans.

How would the pilot program work?

Should the PAWS Act be implemented, it would allow for the VA to create a five year pilot program that provides $25,000 grants to an eligible organization providing service dogs to veterans with severe PTSD.

That grant would also cover any travel expenses for the veteran to obtain the dog and a health insurance policy for the dog.

VETERANS USING CREATIVITY OF MUSIC AND ART TO HEAL PTSD

In order for a veteran to be eligible for a service dog, a veteran will be recommended by a VA medical provider or clinical team and deemed an appropriate candidate for the program. That veteran should have undergone traditional therapy that did not alleviate symptoms of PTSD.

To remain eligible in the program, the veteran must continue to meet with a VA medical provider every six months.

A veteran would have to apply for a service dog through an approved organization, Lyle said. The organization must be accredited by either Assistance Dogs International or the Association of Service Dog Providers for Military Veterans, a newly-formed association created to increase the standards of accreditation and alleviate any issues with service industries, such as airline companies.

What is the fiscal impact of the program?

The program allocates $10 million over five years to fund the provision of service dogs for veterans.

Grants are capped at $25,000 per veteran which includes the training of the dog, veterinary care and travel to pick up the service animal.

And many service dog organizations are able to train and provide dogs for a cheaper cost than the $25,000 cap, DeSantis said. An organization in his own district in Florida provides dogs for under $20,000.

“If it proves to be effective — and we think it will be and the evidence is out there — but once the VA is able to see that it’s effective, then I think we will be able to probably redirect more funds to it if that’s something there’s a need for,” DeSantis said.

MILITARY VETERANS SUFFERING FROM PTSD GET BACK ON COURSE WITH GOLF

Long term, providing service dogs to veterans can also save taxpayers money, Lyle said, as veterans will come to rely on the dogs instead of a “prescription drug cocktail regime.”

“To give one of these guys a dog when they’re young like me, I don’t take a lot of medications anymore, so the VA won’t have to spend money medicating me,” Lyle said. “So it may seem expensive up front, but really trying to introduce these healthy, holistic approaches to mental health, can save not only a lot of lives, but a lot of money.”

DeSantis agreed with Lyle, arguing if a veteran can find help for PTSD through a service dog instead of through a heavy regime of potentially addictive medication, “the savings for the taxpayer will be significant.”

“Obviously it will be good for the veteran, which is more important, but this is also a more effective way to save money and treat a veteran, I think,” DeSantis said.

The congressman also stressed that the pilot program does not spend any “new money” but rather redirects funds from “the VA bureaucracy.”

“They spend a lot on bureaucracy — all kinds of things that don’t help the veterans,” DeSantis said. “So it’s just a straight transfer of money.”

Are service dogs an effective treatment?

Lyle said he is consistently helped by his own service dog, Kaya, a three-year-old, social media savvy German Sheperd. From creating space on a crowded metro to waking him up from nightmares, Kaya is a constant presence in Lyle’s life that mitigates his PTSD symptoms.

“Mitigating symptoms in a way that is healthy. Service dogs really force you to do that,” he said.

Lyle said that through his activism, he has been approached by many veterans who said his work has saved them from suicide.

The VA does not recognize service dogs as “a substitute for effective PTSD treatment,” according to its website.

“Although people with PTSD who have a service dog for a physical disability or emotional support dog may feel comforted by the animal, there is some chance they may continue to believe that they cannot do certain things on their own,” the website states. “For example, if the dog keeps strangers from coming too close, the owner will not have a chance to learn that they can  handle this situation without the dog.”

“Becoming dependent on a dog can get in the way of the recovery process for PTSD,” it continues. “Based on what we know from research, evidence-based treatment provides the best chance of recovery from PTSD.”

Lyle pointed out that there is a specific legal distinction between a service dog and an emotional support animal,

“A service dog is specifically trained to mitigate specific symptoms and are legally protected under the [Americans with Disabilities Act] whereas emotional support dogs and therapy dogs are not legally protected and are really not trained to do anything more than just provide comfort,” he said.

DeSantis also said that the program could help give the government some insight on how to better serve veterans in future years after additional conflict.

“If that record is there, then veterans are going to have better care going forward,” he said.

“It’s easier for society to see the veteran who has lost a limb or has some physical complication or physical wound, and everyone instinctively thinks we need to help that individual. It’s harder, sometimes, for society to understand there’s invisible wounds that comes with being in combat and post-traumatic stress is one of the most significant,” DeSantis said.

What has changed from the original legislation?

There have been changes to the PAWS Act since it was first introduced in March 2016 — then, too, by DeSantis.

One of those changes, according to Lyle, is making stricter the training standards organizations must comply with in order to receive the grant money from the VA.

The current bill has also been refined to include pre-9/11 veterans.

“Initially we limited the service dogs to post-9/11 veterans because we thought the PTSD problem was most acute with that,” DeSantis said. “The reason why we did it was because we wanted the bill to be cost-effective, and the bigger the price tag, the harder it is to pass today.”

“We were able to figure out that limiting it to post-9/11 wasn’t necessary,” he continued, adding that any veteran who goes through the proper VA treatment could be eligible for a service dog. “In some ways it’s more inclusive, but it’s also more targeted to get at really those acute cases of veterans who are not being served well by the prevailing orthodoxy of dealing with post-traumatic stress.”

What’s next for this bill?

DeSantis predicted that the House Committee of Veterans Affairs will “very soon” hold a vote on the legislation. After that, it will be presented to the full House for a vote.

There, too, DeSantis predicted that it will “pass overwhelmingly.” As it stands, the bill has 125 bipartisan cosponsors.

And it’s that overwhelming bipartisan support that DeSantis hopes will encourage the Senate to fast track the legislation.

“The Senate can be cumbersome, but when there’s broad agreement, they can move things pretty quickly through unanimous consent,” DeSantis said. “That’s what we’re hoping to do: tee it up in the House and just get the bipartisan supporters in the Senate to say we need to move this thing pretty quickly.”

DeSantis also said that the VA has “really changed its tune” and become more receptive to the legislation. He hopes that the VA will be supportive should it pass.