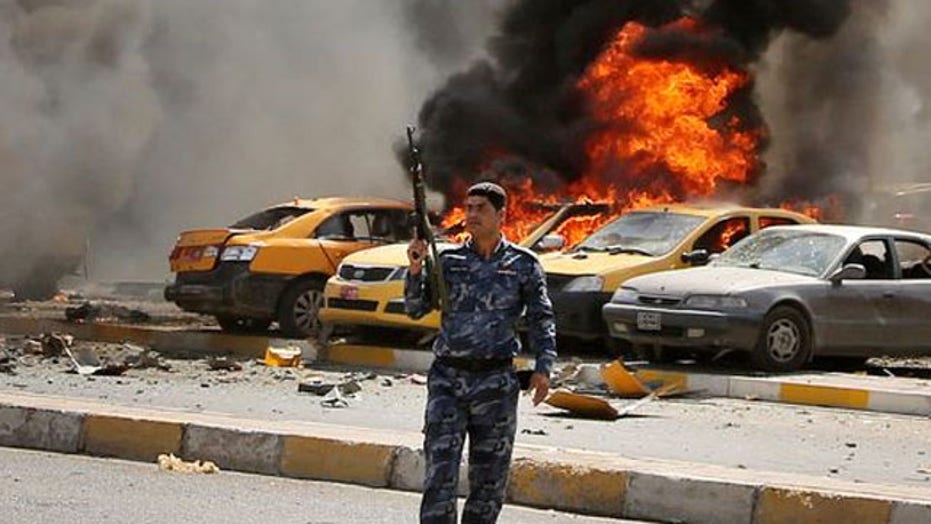 The Obama administration reportedly is preparing to open direct talks with Iran on possibly cooperating to counter the Sunni militant force seizing large swaths of Iraq and threatening Baghdad, weighing an unlikely alliance in the face of a common foe.

Secretary of State John Kerry said Monday the administration was "open to discussions" with Tehran if they can help end the violence. He told Yahoo! News he would "not rule out anything that would be constructive."

State Department spokeswoman Jen Psaki clarified shortly afterward on Twitter that the U.S. is open to a "political conversation" with Iran, "not military cooperation."

The deliberations come as the U.S. moved more assets into the region. According to U.S. Navy officials, the USS Mesa Verde is moving into the Persian Gulf with about 500 Marines on board, to help in the event of an evacuation.

It is the fourth U.S. Naval vessel to move into the Gulf. The ship will join the USS George HW Bush, along with the USS Philippines Sea, a cruiser, and the USS Truxton, a destroyer. Pentagon Press Secretary Rear Adm. John Kirby said the ships provide "the commander-in-chief additional options to protect American citizens and interests in Iraq, should he choose to use them."

In addition, a senior U.S. military official confirmed to Fox News that the U.S. is sending nearly 100 troops to the U.S. Embassy in Baghdad to provide additional security. The embassy remains open, but the State Department already has started to "temporarily" send some embassy staff to other consulate locations in Iraq.

In the face of the growing threat to both the Iraqi government and possibly American interests, The Wall Street Journal reports that a dialogue between the U.S. and Iran on the issue of Iraq is expected to begin this week.

Both sides have publicly committed support to the beleaguered government of Iraq Prime Minister Nouri al-Maliki in recent days.

American and Iranian diplomats are expected to convene in Vienna Monday to begin new talks aimed at curbing Tehran's nuclear program, though it is not clear if Iraq will be discussed on the sidelines of that conference.

The possibility of the U.S. engaging Iran to aid Maliki's government received a cautious endorsement Sunday from one of the president's biggest foreign policy critics.

"Why did we deal with Stalin? Because he was not as bad as Hitler," Sen. Lindsey Graham, R-S.C. said Sunday. "The Iranians can provide some assets to make sure Baghdad doesn't fall."

Other U.S. officials told the Journal that the possibility of any kind of partnership with Iran in Iraq poses the risk of further polarizing the country along sectarian lines. U.S. allies in Sunni-dominated countries like Saudi Arabia, Turkey and Jordan could also be alienated by the dialogue, while allies in Israel and the Middle East worry that nuclear negotiations could be complicated by the two countries working together.

Graham spoke on CNN's "State of the Union."

The New York Times reported Monday that, according to a senior administration official, the White House still believes there is a brief window for some kind of diplomatic solution. The administration reportedly still wants to see if Maliki's Shiite-led government can work with the Kurds and reach out to the Sunni minority to discuss forming a new unity government.

While the U.S. weighs how deeply to get involved, the Islamic State of Iraq and Syria continues to make advances.

Sunni militants captured a town in the northwest of Iraq on Monday.

The mayor of the town of Tal Afar told the Associated Press that his town, approximately 260 miles northwest of Baghdad, was seized before dawn by fighters from ISIS. The town has a population of some 200,000 people, mostly ethnic Shiite and Sunni Turkomen. Tal Afar residents reached by phone confirmed the town's capture and spoke on condition of anonymity, fearing for their safety.

One resident who did give his name, Hadeer al-Abadi, spoke as he prepared to leave town with his family. He said that the local security force left the town before dawn, and local tribesmen who continued to fight later surrendered to the militants.

"Residents are gripped by fear and most of them have already left the town to areas held by Kurdish security forces," al-Abadi said.

The ethnic mix of Tal Afar raises the grim specter of large-scale atrocities by the Sunni militants, who already claim to have killed hundreds of Shiites in areas they captured last week.

Photos posted on a Twitter account associated with ISIS Sunday claimed to show militants carrying out a mass execution of Iraqi soldiers. The images show soldiers being loaded onto flatbed trucks and being forced to lie facedown in a ditch with their hands tied behind them before they were shot. Captions accompanying the photos boasted that as many as 1,700 soldiers had been executed in this way.

Iraq's chief military spokesman, Lieutenant General Qassim al-Moussawi, told Sky News that he believed the photographs were authentic, and said that he was aware of cases of mass murder of captured soldiers in areas held by ISIS.

"The claim by ISIS that it has massacred 1,700 Iraqi Shia air force recruits in Tikrit is horrifying and a true depiction of the bloodlust that these terrorists represent," State Department spoksewoman Jen Psaki said in a statement. "While we cannot confirm these reports, one of the primary goals of [ISIS] is to set fear into the hearts of all Iraqis and drive sectarian division among its people."