President Trump’s lawyers have told FBI Special Counsel Robert Mueller that they want him to produce evidence that Trump has committed a crime before they agree for the president to be interviewed as part of Mueller’s Russia investigation.

Rudy Giuliani, the top lawyer on the legal team, told Fox News on Saturday he is asking Mueller for a “factual basis for the investigation” before the team considers allowing Trump to be interviewed by Mueller’s team.

Trump and his team have become increasingly frustrated with how long Mueller’s probe is taking to complete, and Trump in particular has taken a more aggressive stance toward Mueller since the Department of Justice criticized the FBI’s actions in 2016 in relation to the Hillary Clinton email probe.

The new demands by Trump’s legal team indicate that it is likely to take a more aggressive and combative stance toward Mueller going forward.

The New York Times, which first reported on the new demands, reported that Giuliani has acknowledged that Mueller is unlikely to agree to them, and also left open the possibility that Trump may still agree to be interviewed. Trump has repeatedly said he is keen to sit down with Mueller. 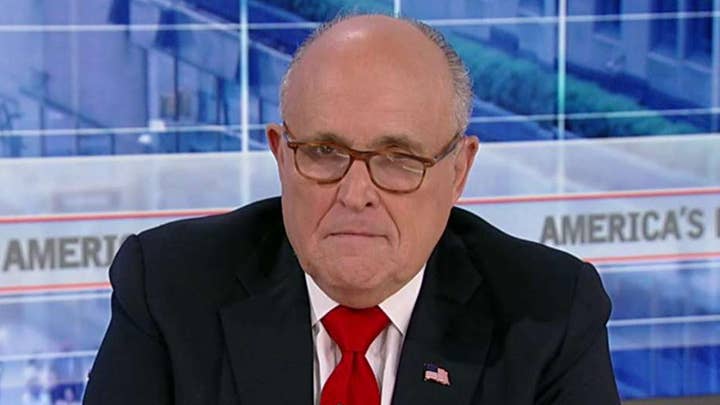 The president’s lawyers specifically want Mueller to explain how the Justice Department gave him the authority to investigation possible obstruction of justice in what was initially a probe into Russian interference in the 2016 election, according to the Times. They also want him to show that that the special counsel has exhausted every other investigative measure before requesting an interview with the president.

The new stance from Trump’s legal team comes amid a more aggressive stance by Trump. He has repeatedly called the Russia probe a “witch hunt” and has taken to calling the Mueller team “the 13 Angry Democrats.”

Last month he called out Mueller for having alleged conflicts of interest.

“When is Bob Mueller going to list his Conflicts of Interest? Why has it taken so long? Will they be listed at the top of his $22,000,000 Report,” he tweeted.

"And what about the 13 Angry Democrats, will they list their conflicts with Crooked [Hillary Clinton]? How many people will be sent to jail and persecuted on old and/or totally unrelated charges (there was no collusion and there was no obstruction of the no collusion).”

Trump has also sought to link Mueller with former FBI Director James Comey, saying that they are “best friends.”

Trump’s challenging of the objectivity of the Mueller probe is also being echoed by his legal team, possibly as a way of undermining the probe in the eyes of the public.

“If they can come to us and show us the basis and that it’s legitimate and that they have uncovered something, we can go from there and assess their objectivity,” Giuliani told the Times.

Trump and his team have repeatedly pointed to FBI agent Peter Strzok, who was removed from the Mueller team after anti-Trump texts he sent to an FBI colleague were uncovered, as a sign of bias within the agency and Mueller's team. DOJ Inspector General Michael Horowitz has said he is investigating whether Strzok's bias may have influenced the launch of the Russia probe.

“If in fact, this is infected with a bias of major proportions from the beginning by Strzok and it seems like it is, and he left behind some of his cohorts...if that’s the case then how can you trust anything they’re doing in this investigation?” he said on "America's Newsroom."

Trump’s legal team has also challenged a Mueller request to interview White House Chief of Staff John Kelly, according to the Times, and has tried to narrow the questions as well as find out what he wants to ask. Kelly has not yet been questioned.

Pressure on Mueller to end the probe has also come from Congress, where Republican lawmakers have also criticized the probe.

“Whatever you got, finish it the hell up, because this country is being torn apart,” Rep. Trey Gowdy, R-S.C. told Deputy Attorney General Rod Rosenstein at a House hearing last month.