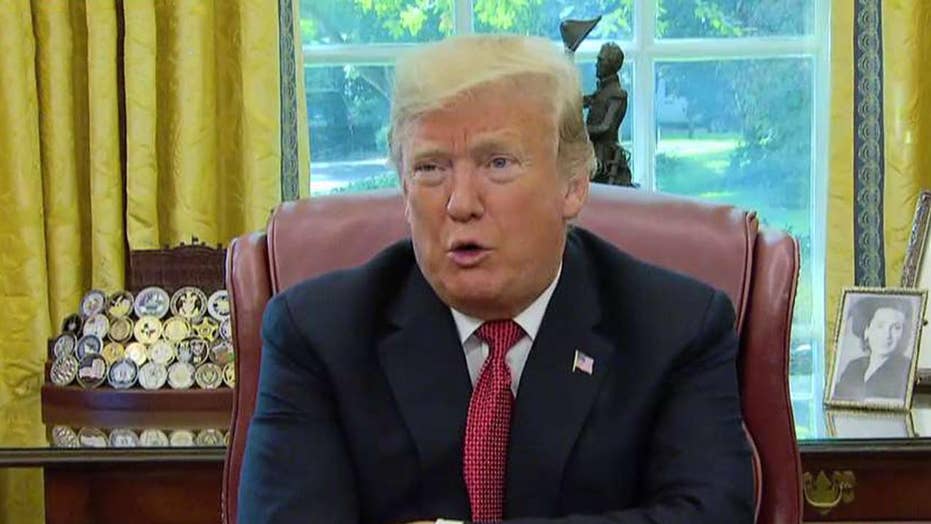 Trump: US asked Turkey for Khashoggi tape, 'if it exists'

President Donald Trump tells reporters that the U.S. has requested audio and video relating to missing Saudi columnist Jamal Khashoggi from Turkey, stresses that Saudi Arabia is an important U.S. ally in the Middle East.

Republican senators are calling for consequences for Saudi Arabia over the presumed death of activist Jamal Khashoggi, as President Trump increasingly warns against a rush to judgment.

These lawmakers are nudging Trump to take action, while suggesting they could respond through congressional action if he doesn't.

In an earlier interview Tuesday with Fox News, Graham said he wants to see Saudi Crown Prince Mohammed bin Salman forced out of his position. He also called for Congress to “sanction the hell out of Saudi Arabia."

Senate Majority Leader Mitch McConnell, R-Ky., told reporters Wednesday the situation is “really going to challenge” the U.S. relationship with Saudi Arabia, though said it’s “too early to predict what the consequences will be.”

"I can’t imagine there will be no response," McConnell said.

Khashoggi vanished two weeks ago during a visit to the Saudi Consulate in Istanbul. Turkish officials allege Khashoggi was killed and dismembered inside the consulate.

“The murder of Jamal Khashoggi as described by the Turkish press is an atrocity,” Maine GOP Sen. Susan Collins tweeted. “We must get to the bottom of this, and if the Saudis killed Mr. Khashoggi, those responsible must be held accountable.”

Florida GOP Sen. Marco Rubio said Sunday on CNN’s “State of the Union” he believes the Trump administration “will do something” but “if he doesn't, Congress will.”

“That, I can tell you with 100 percent certainty. With almost full unanimity, across the board, Republicans and Democrats, there will be a very strong congressional response if, in fact, the Saudis lured him into that consulate, murdered him, cut up his body, and disposed of it,” Rubio said.

Meanwhile, the president is warning against a rush to judgment – as Secretary of State Mike Pompeo flew to Saudi Arabia and Turkey this week to meet with officials.

In an interview with The Associated Press, Trump compared the case of Khashoggi to the allegations of sexual assault leveled against Supreme Court Justice Brett Kavanaugh during his confirmation hearing.

"I think we have to find out what happened first," Trump said. "Here we go again with, you know, you're guilty until proven innocent. I don't like that. We just went through that with Justice Kavanaugh and he was innocent all the way as far as I'm concerned."

Speaking to reporters Wednesday, the president said the United States has requested from Turkey any video and audio related to the presumed death of Khashoggi, amid news reports of the existence of audio capturing his killing.

“We’ve asked for it, if it exists,” the president told reporters in the Oval Office.

Turkish officials have said Khashoggi was murdered in the Saudis' Istanbul consulate, which Saudi officials have denied. U.S. officials say they are taking Khashoggi's disappearance seriously, but Trump says he has not sent the FBI, stressing that he was not "American citizen."

The president on Wednesday called Saudi Arabia an important ally, noting it is an important customer for U.S. military exports.

A day earlier, Trump said he spoke with the Saudi crown prince, who “denied any knowledge” of the circumstances leading to the mysterious disappearance of Khashoggi. His comments came as Pompeo on Tuesday met with the crown prince in Riyadh.

On Wednesday, Pompeo visited Ankara, Turkey to hold talks with Turkish officials about the case. He said America takes the disappearance "seriously."

Fox News’ Chad Pergram and Mike Emanuel and The Associated Press contributed to this report.