President Trump staunchly defended his status as a nationalist and rejected any responsibility for last week's apparent pipe bomb mailings or the deadly shooting Saturday at a synagogue, in an exclusive interview with Fox News' Laura Ingraham Monday night.

Trump also suggested that GQ Magazine correspondent Julia Ioffe "must be some kind of a sick woman" after she claimed hours earlier on CNN that he had "radicalized more people than ISIS." She apologized shortly afterwards on-air, saying she had "exaggerated."

Cesar Sayoc, who allegedly sent explosive devices to CNN and several  top Democrats, among others, "was insane a long time before," Trump told "The Ingraham Angle."

"You look at his medical records. He was insane for a long time," Trump added. 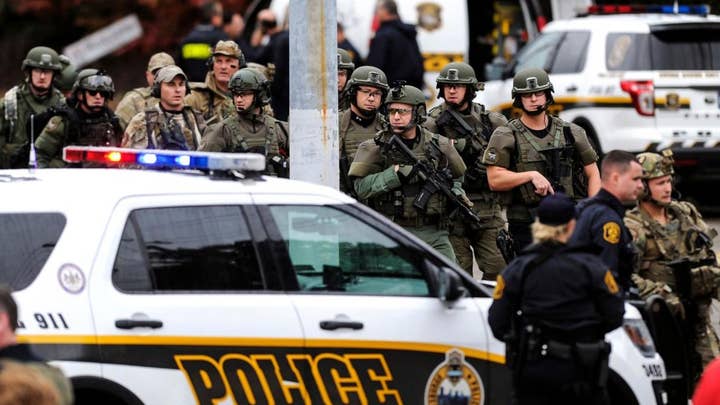 He went on to deny strenuously that he had any connections to anti-Semitism in the wake of Saturday's deadly shooting at a synagogue in Pittsburgh. The president has noted that his son-in-law, Jared Kushner, and daughter Ivanka are Jewish.

"I just received an award from the State of Israel from [Prime Minister] Bibi Netanyahu, thanking me because I moved the [U.S.] Embassy to Jerusalem, making Jerusalem the capital of Israel and I just did that -- now how many presidents said they were going to do it and they never did it?" Trump said.

Trump accused major media outlets, including The Washington Post, of hypocrisy, saying they didn't blame Bernie Sanders for the attempted assassination of several lawmakers at a Republican congressional baseball practice last year. That attack, which nearly killed House Majority Whip Steve Scalise, R-La., and wounded several others, was carried out by left-wing gunman James Hodgkinson, who had worked on Sanders' 2016 presidential campaign.

Meanwhile, liberal critics roundly accused Trump of speaking in coded, roundabout dog whistles when he declared at a rally in Houston earlier this month that "I'm a nationalist," saying he was willingly associating himself with white nationalists and Nazis. 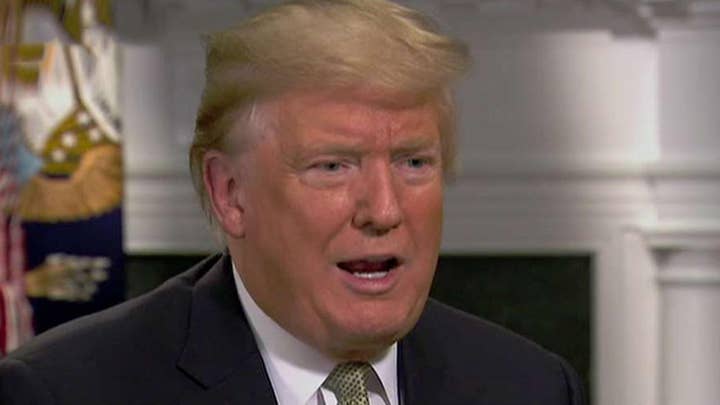 The concept of nationalism, Trump told Fox News on Monday, is entirely distinct from white nationalism. The president was unequivocal when Ingraham asked if he'd like to clarify his remarks on the subject.

"No. To me, I don’t have to clarify," Trump shot back. "It means I love the country. I look at two things: Globalists and nationalists. I’m somebody who wants to take care of our country because for many, many years, our leaders-- you know this better than anybody-- our leaders have been more worried about the world than about the United States, and they leave us in a mess -- whether it’s the wars, whether it’s the economy, whether it’s debt, whether it’s all of the things that they’ve done, including putting in the wrong Supreme Court Justices and we’re -- we’ve really put two great ones in." 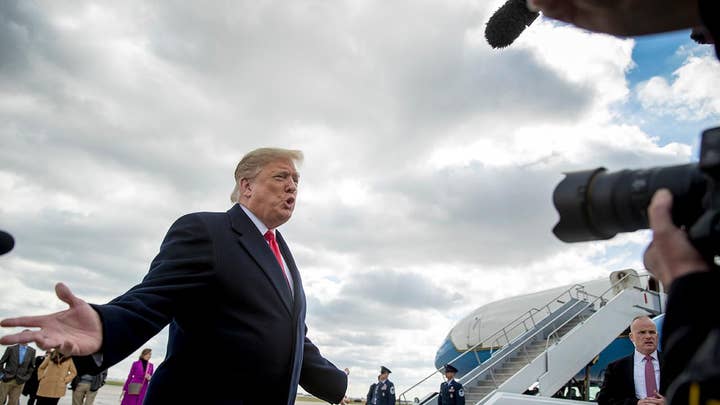 The president also told Ingraham that Andrew Gillum, the Democratic candidate for Florida governor, should not "be allowed to continue on with the race," after the state ethics commission released documents that showed he accepted tickets to the Broadway musical "Hamilton" from an undercover FBI agent in the summer of 2016. Fox News currently assesses the Florida gubernatorial race between Gillum and Republican Ron DeSantis as a toss-up.

"Well, the FBI offered him tickets at $1,800 apiece and he took them -- he took a trip with the same FBI agent -- I guess he was posing as a developer or something -- the man stone cold took this stuff," Trump said, echoing his comments earlier in the day on Twitter. "I don’t even think he should be allowed to continue on with the race." He added that Gillum is a "stone cold thief."

Gillum responded to the controversy at a debate earlier this month, saying: "My wife and I take vacations and we pay for our own vacations … I don't take free trips from anybody."

And on Monday, Gillum attacked Trump directly: "This man has a responsibility to stand up and to speak out against hatred and division. And instead every single day he gets on Twitter and goes to rallies and he stokes fear. His only goal is to make us afraid of each other so that we don’t trust one another so that we don’t respect each other’s humanity anymore,” Gillum said. 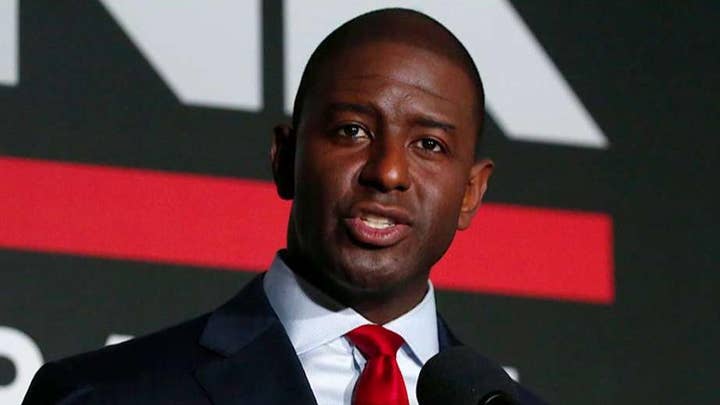 Asked whom he would like to face in the 2020 presidential election, Trump cast a wide net, just a day after his former rival, Hillary Clinton, declared in a New York event, “I’d like to be president.” (Clinton also insisted she would not consider another presidential bid until after the Nov. 6 midterm elections.)

"So far I like them all," Trump said, referring to the field of prospective Democratic nominees. When asked about Clinton's comments specifically, he responded: "I like her too. I like them all. I don’t see anybody that I wouldn’t enjoy running against. And, you know, that could happen, but I don’t see it right now."

Trump took a shot at one potential contender, rival billionaire Tom Steyer, saying on Sunday that he's a "wacky" and "crazed & stumbling lunatic" and that "if he is running for President, the Dems will eat him alive!"

TRUMP TAKES ON PROMINENT LIBERAL WHO BLAMED HIM FOR INCENDIARY RHETORIC

The remarks came after Steyer -- who was one of the prominent liberals to receive a threatening suspicious package last week -- said he "absolutely was blaming" Trump for creating an atmosphere in which "anything can bubble up, and anything is bubbling up." Steyer seemingly implicated Trump's rhetoric not only in the apparent pipe bomb mailings, but also in the deadly shooting Saturday.

Trump is set to visit Pittsburgh on Tuesday to show support for the victims at the synagogue there.

Separately, Trump reiterated that migrants in the Central American caravan making its way through Mexico to the U.S. are "wasting their time" because "they are not coming in. ... We’re not letting them into this country."

"It’s ridiculous that I have to do anything, because I didn’t do anything, but yes, we will probably do something, yes we will respond to questions," he said.