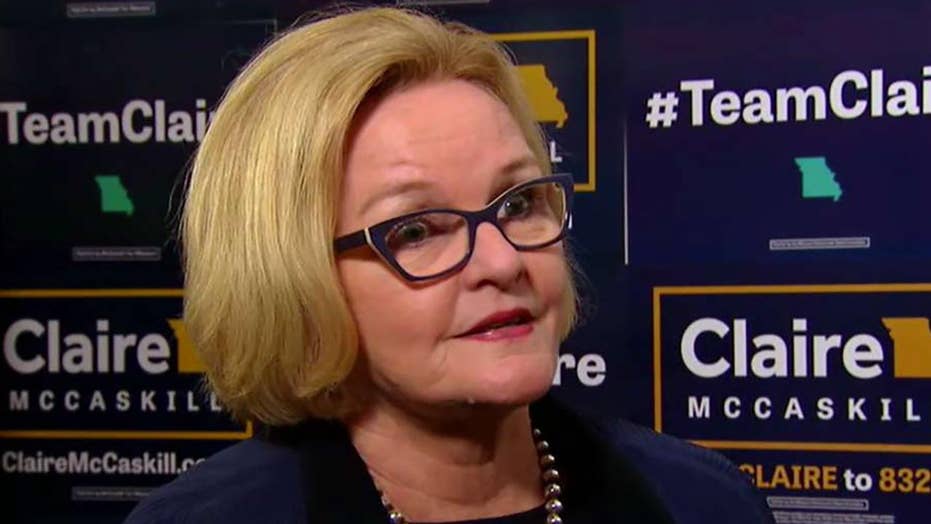 Speaking exclusively to Fox News on Monday, vulnerable incumbent Missouri Democratic Sen. Claire McCaskill dropped the names of two high-profile colleagues, Elizabeth Warren and Bernie Sanders, when asked to identify the "crazy Democrats" from whom her campaign has distanced itself in recent days. McCaskill said she wouldn't call the two "crazy," but noted they had disagreements with each other.

The Missouri senator also sounded some full-throated support for the president's tough talk on the incoming migrant caravan from Central America, as well as the administration's crackdown on what it's called endemic fraudulent asylum claims.

McCaskill unveiled a new radio advertisement last week in which a narrator assured constituents, "Claire's not one of those crazy Democrats."

When Baier asked if McCaskill had any "crazy" colleagues in the Senate, McCaskill referenced Massachusetts Sen. Elizabeth Warren, considered a potential 2020 presidential contender.

"I would not call my colleagues crazy, but Elizabeth Warren sure went after me."

"Well, I would say this," McCaskill replied. "I would not call my colleagues crazy, but Elizabeth Warren sure went after me when I advocated tooling back some of the regulations for small banks and credit unions."

In a fiery speech on the Senate floor earlier this year, Warren blasted Republicans and “far too many Democrats” for "locking arms to do the bidding of the big banks." President Trump signed the bipartisan measure rolling back provisions of the Dodd-Frank Act of 2010, which he called a "crippling" web of regulation that decimated the viability of local banks.

McCaskill went on to float Sanders' name, although she didn't specify exactly why: "I certainly disagree with Bernie Sanders on a bunch of stuff, um, so I'm not afraid. So I don't know those kinds of things which do separate me, I think, from some of the knee-jerk folks that just are against the president no matter what."

Democrats largely have offered mixed, muted messaging on the caravan, with top Democrats accusing Trump of irresponsible rhetoric or trying to change the subject from topics such as health care.

However, McCaskill was forceful: "I think the president has to use every tool he has at his disposal," she said. "And I --100 percent -- back him up on that. Whether it is turning them back because we are not equipped to handle that many asylum claims into our system -- and by the way that's one of the issues here. ... When somebody comes across the border and they ask us for asylum. The law says we need to hear him, but we're waiting way too long to hear it. We need to hear him right away. So I do not want our borders overrun. And I support the president's efforts to make sure they're not."

Approximately 5,200 U.S. troops will be deploying to the southern border in response to the migrant caravan pushing north through Mexico, U.S. officials told Fox News on Monday.

McCaskill, who has fought to portray herself as a mainstream candidate in a state Trump won by double digits in 2016, had consistently but narrowly led in the race earlier this year. Still, she has come under withering attacks from Hawley that she is a "party-line liberal," especially in light of her vote against Supreme Court Associate Justice Brett Kavanaugh. Fox News currently considers the race a toss-up.

"I think the vote against Kavanaugh was going to be tough, no matter what," McCaskill told Baier. "My decision had nothing to do with the allegations that were made against Judge Kavanaugh, or Justice Kavanaugh now. My problem with him was his opinion that he wrote saying that he thinks foreign money should be allowed into ads that influence our elections and that there should be no limits on any contributions to campaigns."

Baier pointed out that McCaskill has voted against both of Trump's Supreme Court nominees, while she backed all of former President Obama's. McCaskill countered that she had voted to approve more than 70 percent of Trump's overall federal judicial nominees.

The Missouri Democrat also equivocated on her decision to support Hillary Clinton's 2016 presidential bid, amid comments by Clinton in New York that appeared to suggest she'd be open to another run at the White House. Trump carried Missouri by double digits.

"It's a hard question," McCaskill replied. "You know, obviously my state disagreed with me on that. I thought she certainly had the breadth and depth of experience that qualified her. But I'd rather look forward and not backward."

McCaskill, standing in front of her campaign bus during the interview, seemed ready for the Nov. 6 elections to come and go. She also appeared hopeful to put the bus behind her, literally: This summer, she attracted widespread criticism for touting her use of a massive, custom RV to tour the state, even as she attempted to hide that she was also using a private plane for travel at the same time.

"I spend a lot of time on it," McCaskill said, referring to the bus. "You know, not just now but for months on end. Can I tell you a secret? I’m a little tired of the bus. I love the people. Hugging strangers. But I've spent a lot of hours on the bus this year."