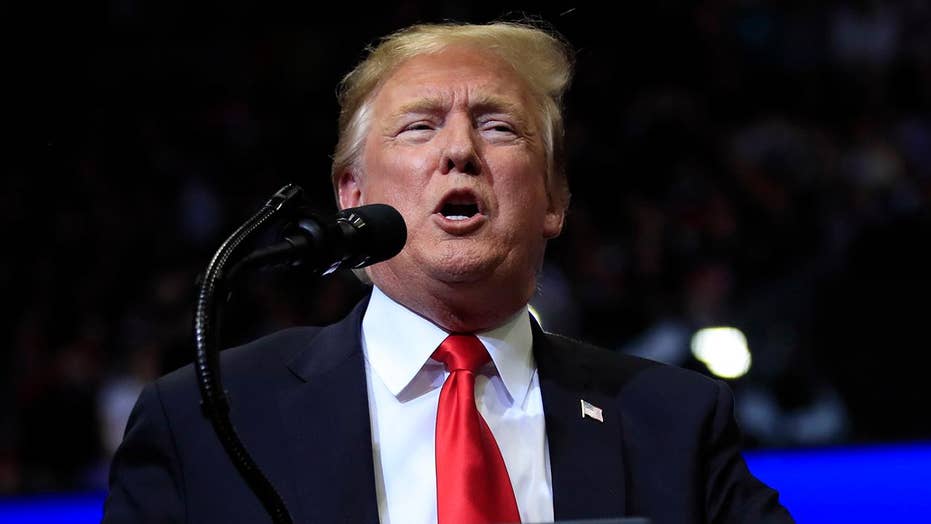 In his first major rally since Special Counsel Robert Mueller cleared him of any collusion with Russia, President Trump took the stage before a boisterous full house at the Van Andel Arena in Grand Rapids, Michigan, Thursday night -- and proceeded to tear into Democrats and the FBI as unintelligent "frauds" who tried desperately to undermine the results of the 2016 election.

"The Democrats have to now decide whether they will continue defrauding the public with ridiculous bullsh--," Trump said to thunderous applause, "-- partisan investigations, or whether they will apologize to the American people."

Addressing counterprotesters outside the arena and progressives in general, Trump asked: "What do you think of their signs, 'Resist?' What the hell? Let's get something done."

Later, Trump vowed to "close the damn border" unless Mexico halts two new caravans he said have been approaching the United States rapidly. Trump also hit at fraudulent asylum applicants, saying liberal lawyers often have coached them in a "big fat con job" to claim they've feared for their lives when they make it to the border.

The economy, Trump said to sustained cheers, "is roaring, the ISIS caliphate is defeated 100 percent, and after three years of lies and smears and slander, the Russia hoax is finally dead. The collusion delusion is over. ... The single greatest political hoax in the history of our country. And guess what? We won."

"I love campaigning against the Green New Deal," Trump remarked at one point. "One car per family -- you're going to love that in Michigan."

Trump predicted that the former DOJ and FBI officials who pushed the collusion theory and authorized secret surveillance warrants against members of his campaign -- whom he incidentally called "major losers" -- would soon have "big problems."

Trump also characterized the chairman of the House Intelligence Committee as "little pencil-neck Adam Schiff, who has the smallest, thinnest neck I've ever seen," and someone who is "not a long-ball hitter."

Schiff, D-Calif., who fiercely pushed collusion claims, has vowed to continue investigating Trump despite Mueller's findings -- even as Republicans have called for his resignation.

The evening was something of a homecoming: Trump became the first Republican in over two decades to win Michigan in the 2016 presidential election, edging out Hillary Clinton thanks, in part, to his decision to cap off his campaign with a final rally in Grand Rapids shortly after midnight on Election Day. "This is our Independence Day," Trump told roaring attendees then.

Thursday night's event, though, was a mixture of homecoming and all-out victory parade, in the wake of Mueller's conclusions. Enthusiastic fans -- including many who stood by Trump amid a torrent of unproven allegations that he conspired with Russia to sway the 2016 election -- began to encircle the Van Andel Arena as early as 3:30 a.m.

Trump relived the Election Day rally on Thursday, telling the crowd that he got home at 4 a.m. in the morning and told Melania Trump that he had an "incredible crowd" late into the evening and thought, "How the hell can I lose Michigan? And guess what: We didn't lose Michigan."

Trump also dropped what he called "breaking news" for locals, promising, "I'm going to get full funding of $300 million for the Great Lakes Restoration Initiative, which you've been trying to get for over 30 years. It's time."

Trump noted that MSNBC and CNN's ratings "dropped through the floor last night," while Fox News' ratings were "through the roof."

Retired cabinet maker Ron Smith, 51, was one of the supporters who arrived to Thursday's rally early. He told the Detroit News outside the arena that although "Republicans in Congress are trying to put stumbling blocks in his path," nevertheless, "Donald Trump comes in here and gets stuff done.”

Separately, Trump called the Jussie Smollet case an "embarrassment" both to Chicago and to the U.S. and vowed to continue border wall construction.

Trump also decried Virginia Gov. Ralph Northam, a Democrat who seemingly endorsed the practice of killing some infants after birth earlier this year.

"In recent months, the Democrat Party has also been aggressively pushing extreme late-term abortion, allowing children to be ripped from their mother’s womb up until the moment of birth," Trump said. "In Virginia, the governor stated he would even allow a newborn baby to be executed."

Senate Democrats blocked a GOP-led effort after Northam's remarks that would have established the standard of care owed to infants who survive failed abortions.

In remarks to reporters before he left the White House earlier in the day, Trump previewed a wide-ranging rally on everything from the economy to health care and border security. But there was little doubt the president would devote a good deal of time to a victory lap on Russia.

Trump also promised to save the Special Olympics, after the Education Department proposed cuts to the program in its latest budget.

The leaked dossier, and related FBI surveillance, kickstarted a media frenzy on alleged Russia-Trump collusion that ended with a whimper on Sunday. Trump, on Thursday, told the crowd in Michigan that the dossier was "dirty."

Michigan Democrats, meanwhile, organized a counter-rally nearby, with the party saying it wanted to issue a "call for action and solutions on the fundamental issues facing us all, like health care, education, clean water, equality, immigrant rights, support for our military veterans, jobs, the economy and more."

A handful of protesters separately waved "socialist alternative" flags and yelled, "No Trump, no KKK, no fascists, USA," according to local reports.

Republicans have maintained that Trump has a good chance to win Michigan again in 2020, although changing demographics could present some headwinds. In November, Democrat Gretchen Whitmer defeated a Trump-backed candidate to claim the state's governorship.

"Democrats are in a pickle and they put themselves here" by trumpeting the investigation, said Brian "Boomer" Patrick, communications director for GOP Michigan Rep. Bill Huizenga. "All the eggs were in one basket on the Mueller report."

At the end of the rally, Trump remarked, "the Democrats took the people of Michigan for granted. With us, you will never be forgotten again." 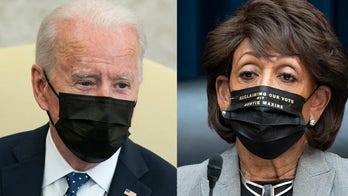