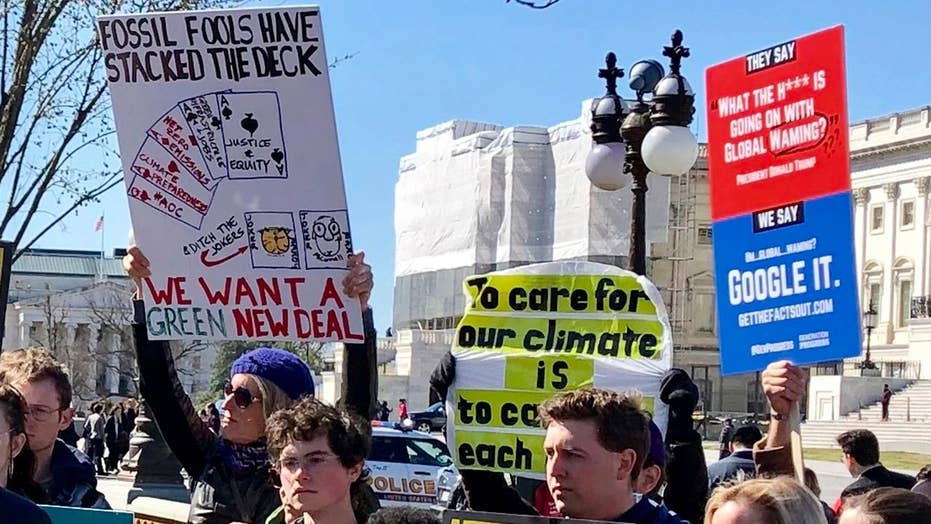 Mitch McConnell says he was giving presidential candidates in the chamber a chance to support a campaign trail staple; Peter Doocy reports from Capitol Hill.

The Green New Deal, a sweeping Democratic proposal for dealing with climate change, fell at the first hurdle Tuesday as the Senate failed to reach the 60 votes necessary to begin debate on the non-binding resolution, with 42 Democrats and Sen. Bernie Sanders, I-Vt., voting "present."

No senator voted to begin debate on the legislation, while 57 lawmakers voted against breaking the filibuster. Democratic Sens. Doug Jones of Alabama, Joe Manchin of West Virginia and Kyrsten Sinema of Arizona joined 53 Republicans in voting "no." Sen. Angus King, I-Maine, who caucuses with the Democrats, also voted "no."

The vote had been teed up by Senate Majority Leader Mitch McConnell, R-Ky., in a bid to make Democratic senators -- including several 2020 presidential candidates -- go on the record about the measure. McConnell had called the proposal "a radical, top-down, socialist makeover of the entire U.S. economy."

Sen. Mike Lee, R-Utah, called the Green New Deal "ridiculous" and displayed pictures of dinosaurs, cartoon characters and babies on the Senate floor. He said he was treating the plan "with the seriousness it deserves."

Democrats, led by Senate Minority Leader Chuck Schumer, called McConnell's move a "sham vote" that aimed to draw attention away from a real debate on the consequences of climate change. In addition to Sanders, Sens. Kamala Harris of California, Cory Booker of New Jersey, Elizabeth Warren of Massachusetts, Amy Klobuchar of Minnesota and Kirsten Gillibrand of New York -- all candidates for the Democratic nomination who have endorsed the Green New Deal -- voted "present" Tuesday.

"Climate change is an existential threat, and confronting it requires bold action," Harris said in a statement following the vote. " ... Political stunts won’t get us anywhere. Combatting this crisis first requires the Republican majority to stop denying science and finally admit that climate change is real and humans are the dominant cause. Then we can get serious about taking action to tackle the climate crisis at the scale of the problem."

"[McConnell's] stunt is backfiring and it’s becoming clearer and clearer to the American people that the Republican Party is way behind the times on clean energy and that Democrats are the party willing to take action," said Schumer, D-N.Y., who asked, "... What's the Republican Party proposal? Is it more coal?"

In explaining his "no" vote, Manchin said in a statement: "This climate problem is a massive one and we must act, but aspirational documents will not solve this crisis –real solutions focused on innovation will ... The truth is even if we zero out our country’s use of fossil fuels tomorrow, we must face the facts that other nations have invested in and will continue to use fossil fuels to develop their economies for decades to come. We cannot successfully address our climate challenge by eliminating sources of energy that countries are committed to using."

Sen. Roy Blunt, R-Mo., said Democrats were being hypocritical by refusing to vote for their own plan. "I've never seen a bill sponsored by a dozen people who don't want to vote on it," he said.

Rep. Alexandria Ocasio-Cortez, D-N.Y., the Green New Deal's main sponsor in the House, tweeted following the vote that she had encouraged Senate Democrats to vote "present" on the resolution.

"McConnell tried to rush the #GreenNewDeal straight to the floor without a hearing," she wrote. "The real question we should be asking: Why does the Senate GOP refuse to hold any major hearings on climate change?"

At a news conference earlier Tuesday, McConnell said he believed climate change was real and at least partially caused by humans, but said the real question facing lawmakers was, "How do you address it?"

"The way to do this, consistent with American values and American capitalism, is through technology and innovation," McConnell said. " ... Not to shut down your economy, throw people out of work, make people reconstruct their homes, get out of their cars, you get the whole drift here. This is nonsense, and if you’re going to sign on to nonsense, you ought to have to vote for nonsense."

By "basically outlawing the only sources of energy that working-class and middle-class families can actually afford," the Green New Deal would "kill off entire domestic industries" and eliminate millions of jobs, McConnell said. The plan could lead to a spike in household electric bills of over $300 a month, he said.