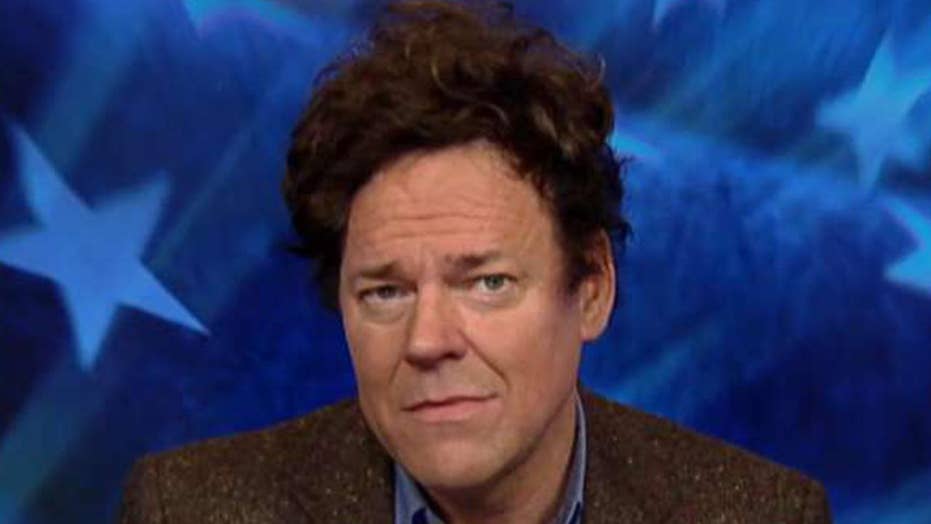 Adviser to Rep. Alexandria Ocasio-Cortez on the details of the Green New Deal

Tucker Carlson takes on Robert Hockett, Cornell law professor and adviser to Rep. Ocasio-Cortez, over the details of the Green New Deal.

A top adviser to New York Democratic Rep. Alexandria Ocasio-Cortez has admitted that an official "Green New Deal" document posted by Ocasio-Cortez's office contained a guarantee of economic security even for those "unwilling to work" -- but not before he went viral in progressive circles for claiming the exact opposite, repeatedly, in an interview with Fox News' "Tucker Carlson Tonight."

Cornell University Law School Professor Robert Hockett, who counsels Ocasio-Cortez on environmental initiatives, challenged host Tucker Carlson when he quoted from an outline and list of "frequently asked questions" (FAQ) that had been posted on Ocasio-Cortez's official website. A similar version of the FAQ was also shared with NPR.

The FAQ and background materials from Ocasio-Cortez's website stated that the Green New Deal will provide "Economic security for all who are unable or unwilling to work," and the FAQ sent to NPR also noted, "We set a goal to get to net-zero, rather than zero emissions, in 10 years because we aren’t sure that we’ll be able to fully get rid of farting cows and airplanes that fast."

Ocasio-Cortez's office removed the documents from her website amid an online backlash. A version of the FAQ that referred to "farting cows" is still available on NPR's website, and a similar version that was posted to Ocasio-Cortez's website is currently viewable on an Internet archiving service. Both versions of the documents describe providing economic security for those "unwilling to work," and state, "This is a massive transformation of our society with clear goals and a timeline" at a "scale not seen since World War 2."

Carlson asked Hockett at the outset of the interview: "Why would we ever pay people who are 'unwilling to work'?"

In a head-turning moment heard around the Internet, Hockett replied flatly, "Uh, we never would, right? And AOC has never said anything like that, right? I think you're referring to some sort of document -- I think some doctored document that somebody other than us has been circulating. ... She's actually tweeted it out to laugh at it, if you look at her latest tweets. It seems apparently, some Republicans have put it out there. I don't know the details."

Is the Green New Deal more than a climate change initiative?

That was an apparent reference to a Thursday tweet by Ocasio-Cortez that criticized parody versions of the Green New Deal FAQ, including one that said, effective immediately, "males should urinate into an empty milk jug instead of a toilet." The parody versions cited by Ocasio-Cortez in the tweet did not contain any reference to providing economic security for those "unwilling to work."

"When your #GreenNewDeal legislation is so strong that the GOP has to resort to circulating false versions, but the real one nets 70 House cosponsors on Day 1 and all Dem presidential candidates sign on anyway," Ocasio-Cortez wrote, along with a picture of the parody version containing the urination reference.

Later in the interview, Hockett doubled down that Ocasio-Cortez's official FAQ did not include a reference to a guarantee of universal economic stability even for those "unwilling" to work: "Definitely not. That's erroneous. It's the wrong document. That's not us."

Cows have been targeted for potential elimination in the Green New Deal (iStock).

The exchange prompted a flurry of support for Hockett on social media among liberal audiences. The left-wing activist group Media Matters for America wrote in a widely shared post, "Watch what happens when Tucker Carlson steps outside the conservative media bubble and gets fact-checked on Green New Deal falsehoods."

But over the weekend, Saikat Chakrabarti, Ocasio-Cortez's chief of staff, admitted that the FAQ shared with NPR and posted on Ocasio-Cortez's website was genuine. Metadata from the document posted by NPR confirmed that Chakrabarti was listed as one of the authors of the FAQ.

“An early draft of a FAQ that was clearly unfinished and that doesn’t represent the GND [Green New Deal] resolution got published to the website by mistake,” Chakrabarti tweeted. “But what’s in the resolution is the GND.”

Both Chakrabarti and Ocasio-Cortez also referred supporters to a stripped-down resolution they formally introduced in Congress. But the resolution also calls for "guaranteeing a job with a family-sustaining wage," plus benefits, to "all people of the United States."

Hockett did not immediately respond to Fox News' request for comment Sunday, but in an email late Saturday to The Daily Caller, he admitted his error. (Media Matters for America, on the other hand, has not corrected its previous post.)

“It appears there was more than one document being discussed yesterday, only one of which I had heard about with any definiteness by last evening after a long day of media appearances – namely, the one referred to by the Congresswoman in her tweet,” Hockett wrote. “I regret that we seem unknowingly to have ended up speaking about different documents for a minute during our longer and otherwise ‘on-the-same-page’ conversation last night.”

On her Twitter account Saturday, Ocasio-Cortez herself acknowledged that a FAQ "got uploaded + taken down," without explaining or providing additional detail.

"There are multiple doctored GND resolutions and FAQs floating around," she wrote. "There was also a draft version that got uploaded + taken down. There’s also draft versions floating out there."

And a report from The Huffington Post asserted that Carlson had been "fact-checked on his own show."

"Literary historians can talk about pirated versions of Ulysses, discarded drafts, notes that Joyce wrote to himself, even his grocery lists," Hockett wrote. "But at some point shouldn't we start reading the actual book -- the huge game-changing work that got signed and published?"

The stakes are high not only for the liberal freshman, but also the Democratic Party at large. The Green New Deal plan, which calls for a massive package of big-government proposals including health care for all, quickly picked up the backing of major 2020 Democratic presidential hopefuls, including Sens. Kamala Harris, D-Calif., Elizabeth Warren, D-Mass., and Cory Booker, D-N.J. -- who all co-sponsored the resolution.

“Our history is a testimony to the achievement of what some think is impossible — we must take bold action now,” Booker tweeted last week.

The White House appeared heartened by the Democratic contenders' support for the sweeping program.

"I think half the announced presidential candidates that are Democrats have supported this, although they aren’t really sure what it is," Acting White House Chief of Staff Mick Mulvaney told "Fox News Sunday."

Mulvaney added: "The other half -- I don’t know where the Democrat Party is on this, I know where the Republican Party is, and by the way, it’s fun to be in a party that is united while the other is divided."

SHOULD BE ABOLISH ICE BECAUSE LATINOS ARE 'NATIVE' TO THE U.S.? OCASIO-CORTEZ SAYS ABSOLUTELY

The plan and accompanying documents from Ocasio-Cortez include a range of far-fetched goals -- and drew swift scorn from Republicans and other critics. The Republican National Committee dubbed it a "Socialist wish list" that would kill at least 1 million jobs and disrupt global trade -- while costing trillions.

As Mulvaney implied, the Green New Deal push has seen resistance not only from Republicans, but also some key Democrats. Sen. Mazie Hirono, D-Hawaii, was asked about the plan to replace planes with high-speed rail and did not seem impressed.

“That would be pretty hard for Hawaii,” she laughed.

Even aside from the Green New Deal, conservative commentators have argued that most proposed solutions to global warming would do more harm than good, and also have accused climate activists of crying wolf. In 2006, a NASA scientist and leading global warming researcher declared that the world had only 10 years to avert a climate catastrophe -- a deadline that has come and gone.