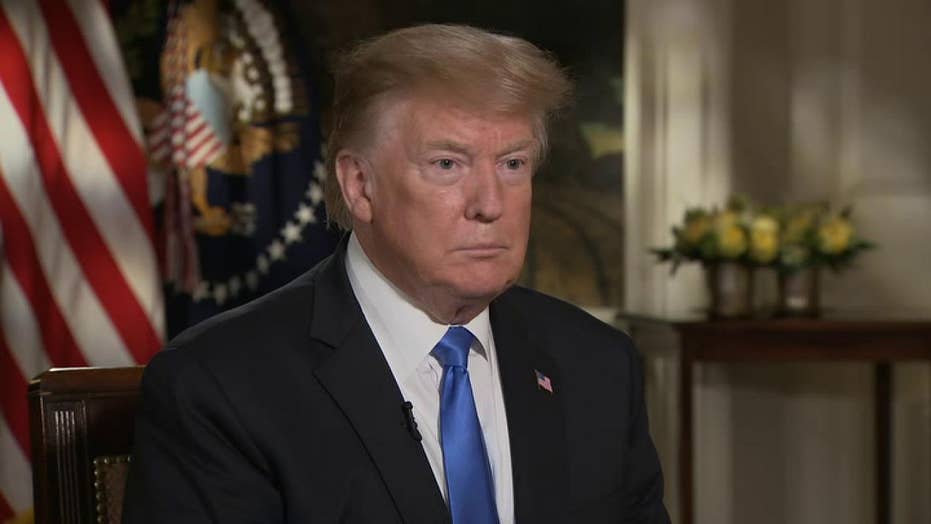 Attorney General Bill Barr made the right call in deciding not to appear before the House Judiciary Committee on Thursday, Trump said, following his testimony Wednesday in the Senate. House Democrats had insisted that committee counsel, rather than members of Congress, question Barr.

"It's not up to me, it’s up to him," Trump said, referring to Barr's decision not to show up. "And they were going to treat him differently than they’ve treated other people.  And of course we’ve been treated differently to start off with.  We’ve gone through so many investigations, everybody.  And it’s so ridiculous.  No obstruction, no nothing -- there’s been no nothing.  There’s been no collusion, there never was, they knew that from day one."

The New York Times reported earlier Thursday that the FBI secretly deployed an informant to London in 2016 to gather information from then-Trump foreign policy aide George Papadopoulos, who told Fox News later that the informant posed as a researcher and tried to "seduce" him.

Former FBI Director James Comey, Trump told Herridge, "probably was one of the people leading the effort on spying" on his campaign. Trump said we “will find out pretty soon” the extent of Comey's involvement.

"Comey leaked and he lied," Trump said. "He lied in front to Congress.  He was sworn testimony, classified information. He did a terrible job.  Everybody wanted him fired -- you now everybody; [Senate Minority Leader Chuck] Schumer, every Democrat almost, every Republican, almost -- probably 100 percent."

Trump has called the subpoena issued to McGahn by House Judiciary Committee Chairman Jerrold Nadler, D-N.Y., a "ridiculous" waste of time. The ex-White House lawyer sat for more than two dozen hours of interviews with Mueller and featured prominently in Mueller's report, and Trump has disputed the account in the report that he ordered McGahn to fire Mueller at one point.

"They shouldn't be looking anymore. It's done."

Trump additionally told Herridge he expected that key FBI documents that may shed light on the origins of the bureau's probe into his campaign could be declassified and released within a matter of weeks, or months at the latest.

"Yes, I’m going to be allowing declassification pretty soon," Trump said. "I didn’t want to do it originally because I wanted to wait, because I know what they -- you know I’ve seen the way they play.  They play very dirty.  So I decided to do it, and I’m going to be doing if very soon, far more than you would have even thought."

Trump previously told Fox News that his attorneys advised him not to declassify and release the full documents -- including surveillance warrant applications to monitor former Trump aide Carter Page and related materials -- while the Mueller probe was ongoing, for fear the administration would be accused of obstructing justice by doing so.

President Trump said his White House counsel, Don McGahn, will be departing in the fall after the Senate confirmation vote for Judge Brett Kavanaugh to serve on the Supreme Court. (AP Photo/Jose Luis Magana)

"Can you imagine someone campaigning -- she doesn't know anything about me, and she's campaigning on that fact," Trump said of the Democrat. "They've gone through everything -- my taxes, my financial statements, which are phenomenal. And I'm so clean. Think of it -- after two and a half years, and all of that money spent, nothing. Very few people could have sustained that."

"I'd be very happy if it were Biden, Sleepy Joe. I think he did a bad job. ... I just don't think he'd be a very good candidate. I mean, we'll see what happens. I wish him well, I'd like him to get it. I'd be happy with Bernie. I personally think it's between those two. I don't see anybody else, but could be. You never know."

Biden expressed his lack of concern over China as a global competitor to the U.S. at a rally on Wednesday, prompting a grim response from Sen. Mitt Romney, R-Utah.

Reacting to those remarks, Trump said Biden was among many politicians "naive" over China. "For somebody to be so naive, and say China's not a problem -- if Biden actually said that, that's a very dumb statement."

Former Secretary of Education Dr. Bill Bennett says the former vice president should be pressed on why he is taking a 'soft stance' on China after his son Hunter received $1 billion from the Bank of China.

Biden has faced scrutiny over his past comments and actions in Ukraine, including bragging on video that he pressured the country to fire its top prosecutor, who happened to be leading a corruption investigation of a natural gas company that employed his son Hunter Biden.

"I'm hearing it's a major scandal," Trump said, after urging Biden to explain the situation. "They even have him on tape, talking about the prosecutor -- and I've seen that tape. They have to solve that problem."

And, as protesters and military forces clashed in Venezuela, Trump again indicated his strong support for opposition leader Juan Guaido.

"He's a brave guy, and what's happening in Venezuela is sad," Trump said, although he refused to draw a specific red line for military intervention.

"There's always a tipping point," Trump said, when pressed on what it would take for the U.S. military to become involved. "Certainly, I'd rather not do that."

Separately, Trump said China "took advantage of us on trade like nobody in history has ever taken advantage of anyone," but revealed that an agreement amid the country's ongoing trade war with the U.S. could be imminent.