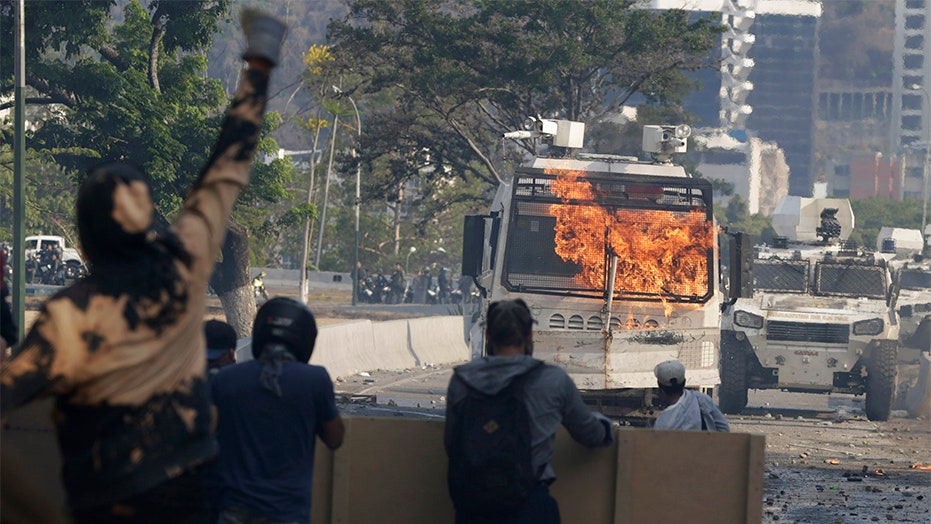 What are President Trump’s options on facing the Venezuela crisis?

Guaidó’s push for a general strike and for Venezuelans to remain in the streets – which was met with cheers Wednesday by a crowd of thousands that had gathered to hear him speak in Caracas – were his latest moves in a fledgling attempt to unseat Maduro from power.

But as of Thursday afternoon, the streets of Venezuela's capital have remained calm, the Associated Press reports. The current situation is in contrast to clashes between Maduro loyalists and Guaidó’s supporters in La Victoria and Caracas over the past two days, which have left four dead, the Venezuelan Observatory of Social Conflict announced. Human rights activists say at least 230 people were injured and 205 were detained during the violence.

One of them -- a 27-year-old woman -- was gunned down Wednesday in Caracas, according to the BBC. Gustavo Duque, the mayor of one of Caracas’ municipalities, told the Associated Press that the Salud Chacao medical center took in 27 new patients by late afternoon Wednesday, one of whom was shot in the foot.

Flames erupt on a water cannon vehicle after anti-government demonstrators hit it with a gasoline bomb during clashes with security forces loyal to President Nicolás Maduro in Caracas, Venezuela, on Wednesday. (AP)

FORMER VENEZUELAN U.N. DELEGATE: ‘THIS IS A POINT OF NO RETURN’

Those injuries are on top of more than 50 reported by the hospital's director during clashes Tuesday.

But Guaidó’s repeated calls for a military uprising against Maduro appear to be gaining little momentum. Only the chief of Venezuela's feared intelligence agency has broken ranks, while most others are standing steadfast, the Associated Press reports.

Protesters like Beatriz Pino, who took to the streets Wednesday waving flags and banging pots and pans, said they weren't entirely surprised by the military's response to Guaidó. She said the late President Hugo Chavez politicized Venezuela's military as he installed a socialist system. Despite the setback, she said she remained committed to the opposition's call for protest.

"We can't leave the streets," she said. "We've been in this for years."

The struggle also has heightened geopolitical dimensions, with the United States and more than 50 other nations backing Guaidó as Venezuela's legitimate president and Maduro allies like Russia lending the beleaguered president military and economic support.

U.S. National Security Adviser John Bolton said Wednesday that Maduro is surrounded by "scorpions in a bottle" and that key figures among his inner circle had been "outed" as dealing with the opposition.

Secretary of State Mike Pompeo plans to meet next week with Russia's foreign minister to discuss the situation in Venezuela, a senior U.S. official told the Associated Press.

Opposition leader Juan Guaidó flashes a thumbs up at supporters during a rally in Caracas on Wednesday. (AP)

The United States contends Maduro had been ready to flee Tuesday, an airplane already on the tarmac, but was talked out of it by Russian advisers. Maduro has denied those claims.

He appeared Thursday with soldiers at the air base where Guaidó called for an uprising two days earlier.

Flanked by commanders, Maduro said the military must be prepared to combat "traitors" and the opposition had sought to provoke bloodshed in Caracas since security forces failed to respond to Guaidó's bid to take power.