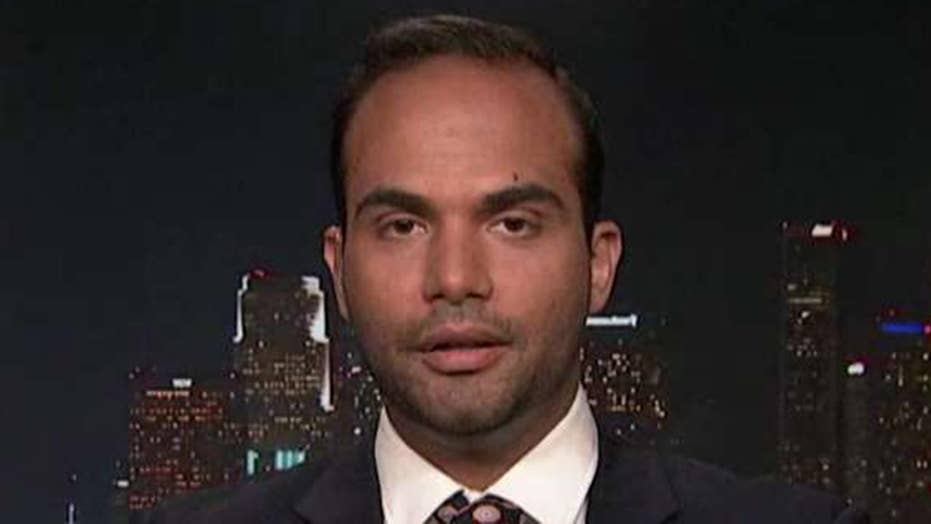 Papadopoulos: FBI spy wanted me to slip up and say something I had no information on

An informant working for U.S. intelligence posed as a Cambridge University research assistant in September 2016 to try to probe George Papadopoulos, then a Trump foreign policy adviser, on the campaign's possible ties to Russia, according to a new report.

And, Papadopoulos told Fox News on Thursday, the informant tried to "seduce" him as part of the "bizarre" episode.

The Thursday report in The New York Times cited individuals familiar with the Justice Department's ongoing Inspector General (IG) review of the intelligence community's actions in the run-up to Donald Trump's election as president. Attorney General William Barr received harsh partisan blowback for suggesting that "spying did occur" during the presidential race, but doubled down at a testy Senate hearing on Wednesday.

The Times reported that the FBI sent a woman using the alias Azra Turk to meet Papadopoulos at a London bar, where she asked, conspicuously and directly, whether the Trump team was working with Russia.

Papadopoulos told Fox News on Thursday that he "immediately thought she was an agent, but a Turkish agent, or working with the CIA," and "that's why I never accepted her overtures and met her again after London. ...  London became a very bizarre hangout spot for me that year."

The FBI did not reply to Fox News' request for comment.

Turk, Papadopoulos added, was trying to "seduce" him in an effort to "make me slip up and say something that they knew I had no info on."

Papadopoulos told Fox News that he saw Turk three times in London: once over drinks, another over dinner, and then once with Stefan Halper, the Cambridge professor who has been a longtime FBI informant. The Times noted that Turk had apparently been sent to oversee Halper, and possibly to provide cover for Halper in the event Turk needed to testify.

In House testimony, Papadopoulos previously said Turk "didn't strike me as a Cambridge associate at all" and noted that "her English was very bad." According to Papadopoulos, "the professors liked to introduce me to young beautiful women."

On Twitter Thursday, Papadopoulos emphasized that Turk's English was poor, and disputed the Times' reporting that Turk was sent by the FBI. "She was CIA and affiliated with Turkish intel," he wrote.

"As someone who has worked a lot in the Middle East and Southern Europe on policy issues and energy issues, as I was heavily involved in from 2011-2017, I would notice odd behavior of people I later learned were agents," Papadopoulos told Fox News.

When asked when he learned Turk was an agent, Papadopoulos replied: "I always had suspicions but the moment Halper was outed a year ago, I knew she was, too."

The informant operation against Papadopoulos provided no useful information to U.S. intelligence, the Times reported. Special Counsel Robert Mueller's report indicated that operation began after Papadopoulos told an Australian official of "indications from the Russian government that it could assist the campaign through the anonymous release of information damaging to candidate Clinton."

On Twitter, Papadopoulos said U.S. intelligence was well aware that he had no illegal ties with Russia and wanted to probe his “work on the East Med [Eastern Mediterranean] pipeline that they all wanted to stop.”

In 2014, Papadopoulos, who was involved in energy lobbying, wrote an article asserting that Israel should export natural gas through Cyprus to Europe, and charged that using a pipeline through Turkey was an idea “bereft of the political realities in the region and does not take into account the potentially devastating impact this option can have on Israel’s strategic relations with EU member Cyprus, and by extension, all of Europe.”

“There is a word for this in the English language: spying. Democrats and their media friends have expressed horror at the term, but there is no other way to describe it: The FBI spied on the Trump campaign in 2016,” Trump campaign manager Brad Parscale said. “For two years, Democrats and their allies in the media have lied to the American people about the Russia collusion hoax, when all along the real scandal was the Obama administration using the Justice Department to spy on a political adversary’s campaign. As President Trump has said, it is high time to investigate the investigators.”

Papadopoulos pleaded guilty to making false statements in January 2017 to FBI agents concerning his contacts with Russia-linked European professor Joseph Mifsud, and was arrested at Dulles airport that July. In his guilty plea, Papadopoulos acknowledged that in April 2016, Mifsud said Russia had "dirt" on Trump's presidential-race rival, Hillary Clinton -- several months before emails began leaking from her campaign as part of what authorities call a Russia-led hacking operation.

It has long been suggested – in court documents filed by Mueller’s team, by Democrats on Capitol Hill and in the media – that Mifsud was connected to Russian intelligence, though others insist that he more closely associated with Western governments and their intelligence agencies.

Trump: AG Barr will do what's right on campaign spying

President Trump weighs in on new Strzok-Page texts, the FISA abuse scandal, and the origins behind the Russia investigation on 'Hannity.'

“Quite frankly, I don't think anybody is buying that this guy was some Russian intermediary or Russian spy trying to collude with me," Papadopoulos told Fox News. "Quite frankly, even people like Rudy Giuliani are going public and stating that he was probably part of some sort of setup."

Mueller's report specifically noted that Papadopoulos was investigated as a potential foreign agent of Israel. “While the investigation revealed significant ties between Papadopoulos and Israel (and search warrants were obtained in part on that basis), the Office ultimately determined that the evidence was not sufficient to obtain and sustain a conviction,” Mueller's team wrote.

“I was actually really impressed and quite frankly shocked that Bob Mueller told the truth about why I was illicitly targeted and it really had nothing to do with Russia," Papadopoulos told Fox News. "It had to do with my ties to Israel."

Michael E. Horowitz, the DOJ inspector general, is expected to release his findings on the intelligence community's actions as soon as this month or the next.