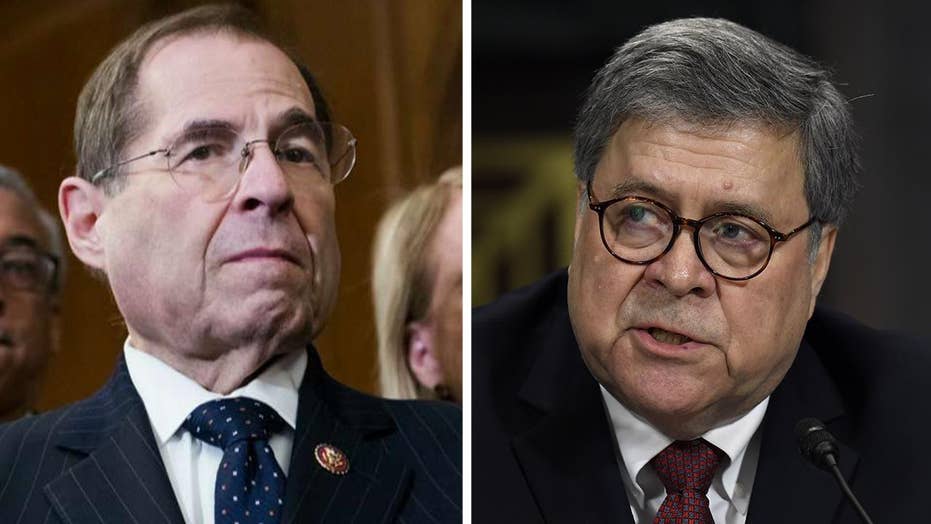 Democratic chairman Jerry Nadler says all options, including a subpoena for the attorney general, are on the table.

The House Judiciary Committee has been informed that Attorney General Bill Barr will not testify at a planned hearing Thursday, an aide to the panel told Fox News -- even as the Democrats who lead the committee vowed to hold the hearing anyway, and threatened a possible contempt citation against Barr.

Democratic Caucus chairman Hakeem Jeffries, D-N.Y., said Wednesday afternoon that Democrats "plan on subpoenaing" Barr "if he decides not to show up."

"He can run but he can’t hide," Jeffries said.

A key sticking point was that Nadler wants to have House Judiciary Committee staff -- rather than members of Congress -- question Barr on his handling of Special Counsel Robert Mueller's report. But DOJ officials said members should conduct the inquiry, and it was unclear why Democrats did not propose having staffers simply provide questions to members during the hearing.

In remarks to reporters Wednesday afternoon, Nadler said Democrats had "worked around the clock" to address Barr's concerns, and slammed what he called Barr's "lack of candor."

"He's trying to blackmail the committee into not following the most effective means of eliciting the information we need," Nadler said. "He is terrified of having to face a skilled attorney."

Nadler also said the DOJ had denied House Democrats' request for the full and unredacted Mueller report, and said compliance with congressional subpoenas is "not optional."

U.S. Rep. Jerrold Nadler, D-N.Y., chair of the House Judiciary Committee, had called for congressional staff -- not members of Congress -- to question Barr on Thursday. (AP)

Although Barr has not yet been subpoenaed to testify, Nadler said contempt citations could be possible down the road not only if the full Mueller report is not released, but also if Barr does not comply with a possible future subpoena. The move would not be unprecedented: Republicans in the House held Obama Attorney General Eric Holder in contempt in 2012, after he refused to provide information on the failed failed gun-running sting known as "Fast and Furious."

“It’s a shame Members of the House Judiciary Committee won’t get the opportunity to hear from Attorney General Barr this Thursday, because Chairman Nadler chose to torpedo our hearing," House Judiciary Committee ranking member Doug Collins, R-Ga., said in a statement. "The attorney general gave clear, informative testimony in the Senate Wednesday, as he offered to do more than a month ago in the House tomorrow.

“By rejecting the chance to question Attorney General Barr or read the materials he’s provided, Democrats are trying to prolong an investigation the special counsel completed," Collins continued. "Ultimately, though, they’re ignoring the will of the majority of Americans who want Congress to move on and secure our border and continue to strengthen our economy.”

"We're not torpedoeing this hearing," Nadler countered, responding to Collins' remarks. He added that Barr has a "nerve" to challenge the panel's ability to conduct its own hearing.

"Well, to all my friends on the other side: We gave Mueller two years to do his job," Graham said. "He had 19 lawyers. He had $25 million, he interviewed 500 people, he issued 2,000 subpoenas. He had plenty of opportunity without interference. The president gave him a million and a half documents. Everybody around the president and on the president's campaign testified voluntarily, and here’s what we know: There was no conspiracy between the Trump campaign and the Russians at all. Mueller could not decide -- chose not to press forward on obstruction. I always thought the obstruction argument was absurd. It is over, and the reason they are mad at Barr and me is because they didn't get the outcome they want. My friends on the other side want an outcome, and they don't care how they get it.”

“Today, the Attorney General testified before the Senate Judiciary Committee for over five hours," Kupec said. "The Attorney General also voluntarily released the Special Counsel’s confidential report with minimal redactions to Congress and the public, made an even-less redacted report available to Chairman Nadler and congressional leadership (which they have refused to review), and made himself available to the Committee by volunteering to testify this week. Unfortunately, even after the Attorney General volunteered to testify, Chairman Nadler placed conditions on the House Judiciary Committee hearing that are unprecedented and unnecessary."

Kupec added: "Congress and the Executive branch are co-equal branches of government, and each have a constitutional obligation to respect and accommodate one another’s legitimate interests. Chairman Nadler’s insistence on having staff question the Attorney General, a Senate-confirmed Cabinet member, is inappropriate. Further, in light of the fact that the majority of the House Judiciary Committee – including Chairman Nadler – are themselves attorneys, and the Chairman has the ability and authority to fashion the hearing in a way that allows for efficient and thorough questioning by the Members themselves, the Chairman’s request is also unnecessary. The Attorney General remains happy to engage directly with Members on their questions regarding the report and looks forward to continue working with the Committee on their oversight requests.”

It is unusual for committee counsels to question a witness, especially a high-ranking Cabinet official.

Several top Democrats, including Elizabeth Warren and Kamala Harris, have called for Barr's resignation in the wake of his Senate testimony on Wednesday. The hearing covered everything from Barr's decision not to pursue an obstruction case against President Trump to process delays in getting a redacted version of Mueller's report to the public to Mueller's apparent concerns about how Barr initially relayed his findings to Congress.

Barr, for his part, called some of Mueller's comments "a bit snitty," and suggested that the brouhaha was "mind-bendingly bizarre" political theater, given that the Mueller report has been released publicly already.

Separately on Wednesday, Democrats said Carl Kline, the former director of the White House Presidential Personnel Office who handled security clearances, had failed to substantively answer several questions posed by the House Oversight and Reform Committee during a closed-door hearing.

Illinois Democrat Rep. Raja Krishnamoorthi told reporters Kline will have to answer questions "one way or another."

"I am not happy, since the White House is basically instructing the witness not to answer questions that are very pertinent to our inquiries," Krishnamoorthi said. "We need to know about specific cases, specific individuals, and there seems to be some kind of blanket assertion that is not lodged in executive privilege or any kind of a recognizable basis for not answering questions. And so today's a voluntary interview, but I suspect we're going to be disputing this after today."

However, a source familiar with the interview said Kline testified he was never instructed by anyone in the White House to change a security clearance determination — and that all decisions were made by career security professionals.

Additionally, according to his testimony, Kline was never asked by anyone in the White House to do his job any differently. He said he feels that no one ever tried to influence him, and does not regret any of the decisions he made.

The probe intensified after Tricia Newbold, an 18-year government employee who oversaw the issuance of clearances for some senior White House aides, revealed that she compiled a list of at least 25 officials who were initially denied security clearances last year, but had senior officials overrule those denials.

Fox News is told Kline testified he was deeply disappointed when he learned about the Newbold leaks and feels they are incorrect characterizations.

"We had asked for certain documents so we could be more effective and efficient in our questioning, and what has happened is the White House has failed to produce one document," House Oversight chairman Elijah Cummings, D-Md., told Fox News. "So that concerned us greatly."

Cummings said Kline was instructed by attorneys approximately 60 times not to answer questions.

“Mr. Kline answered quite a few questions, but there was a lot he did not answer," Cummings said.