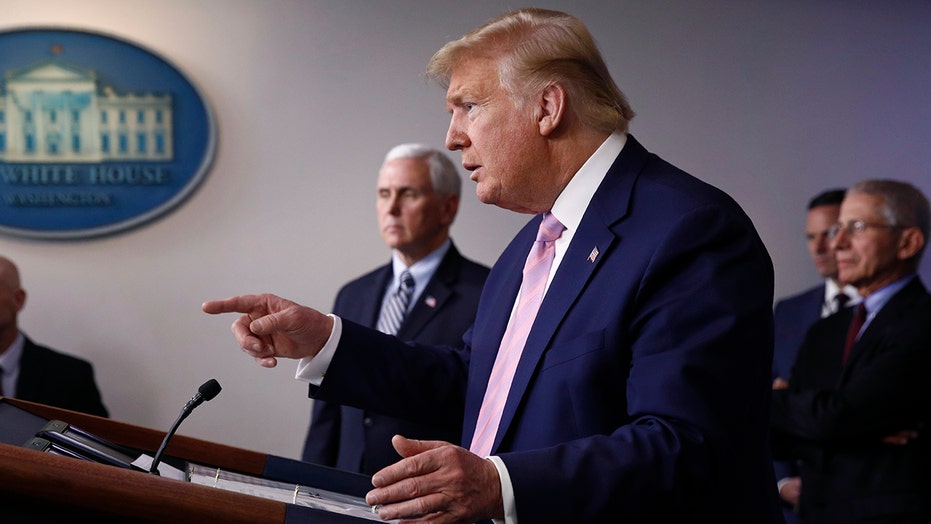 Saying "we hope we're seeing a leveling off in the hottest spots of them all," President Trump revealed Sunday evening that 1.67 million people have now been tested for coronavirus in the United States as the "light at the end of the tunnel" emerges  -- although he made clear he felt some politicians have let their constituents down during the crisis.

Trump further signaled he'd be open to the government sending out an additional round of stimulus checks to Americans, saying: "I like the concept of it." He added that the current round of stimulus money should be distributed within two weeks.

In the meantime, Illinois Gov. J.B. Pritzker was "complaining all the time" despite underperforming, Trump charged at a briefing with the president's coronavirus task force. The two officials have sparred in recent days, with the Democrat accusing the White House of failing to provide all the ventilators he wanted.

“He’s not able to do what he’s supposed to be able to do as a governor," Trump said. "He has not performed well."

Later during the briefing, Vice President Mike Pence said he had spoken to Pritzker, and the governor did "express great appreciation for the fact that our Army Corps of Engineers had constructed 500 beds at McCormick Place [convention center], and before the end of this week would construct another 2,500 beds for an overflow health facility in Chicago." Mayor Lori Lightfoot said the Army Corps was "outstanding," Pence noted.

"We have sent 600 ventilators to the state of Illinois, but I assured the governor,  and I assured the mayor, that while the principle focus that we have in the next several days is the rising cases in the greater New York City area and Louisiana, that Michigan and Illinois are in the forefront of our thinking," Pence said. "At the president's direction, we're gonna make sure that the people of Illinois and the people of Michigan have the resources, equipment and support that they need."

The flareup was notable given that some prominent left-wing Democratic governors have come to the president's defense.

"This is not time to bicker," California Democratic Gov. Gavin Newsom said last Wednesday on CNN. “Let me just be candid with you. I’d be lying to you to say that [Trump] hasn’t been responsive to our needs. He has. And so, as a sort of an offer of objectivity, I have to acknowledge that publicly."

Newsom added: "The fact is, every time that I've called the president, he's quickly gotten on the line. When we asked to get the support for that [USNS] Mercy ship in Southern California, he was able to direct that in real-time. We've got 2,000 of these field medical sites that are up, almost all operational now in the state, because of his support. Those are the facts."

Also at the briefing Sunday, Rear Adm. John Polowczyk said U.S. operatives were going to facilities in China to inspect all medical equipment being sent to U.S. and make sure it is functional, amid reports that China has sent faulty testing kits and other supplies to several other countries.

Additionally, Dr. Deborah Birx observed that Spain and Italy have provided "really helpful signs" that social distancing was working, and new cases and deaths were declining in both countries. 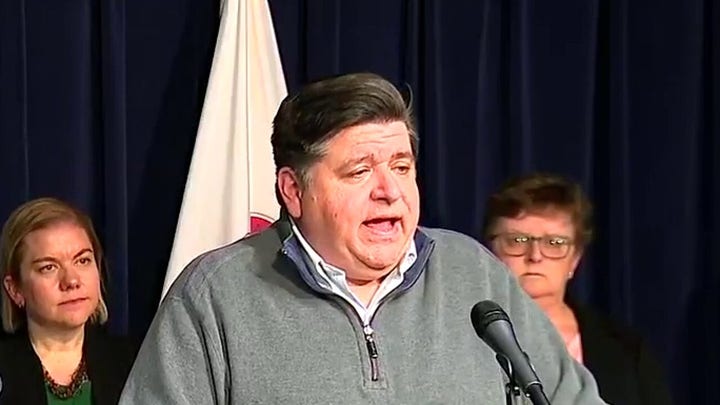 Birx said "we're very hopeful" over the next week that there will be a "stabilization of cases across these large metro areas where the outbreak began several weeks ago." Spain and Italy were "giving us hope of what our future could be," she asserted.

"In the days ahead, America will endure the peak of this terrible pandemic," Trump said, before remarking that the end of the crisis could soon follow.

Trump separately told reporters that an additional 600,000 N95 masks will be arriving to New York City on Monday "to take care of the needs of the public hospital system," on the request of Mayor Bill de Blasio. Another 200,000 masks will be headed to Long Island after officials there made the request, Trump added.

Some 500 ventilators were on their way to New Jersey, 200 to Louisiana, 300 to Michigan, 600 to Illinois and 100 to Massachusetts, the president said. Louisiana's Gov. John Bel Edwards said earlier in the day that his state could run out of ventilators by Thursday.

National Guard personnel walking outside the Ernest N. Morial Convention Center in New Orleans, after officials set up a temporary hospital there amid the coronavirus. (AP Photo/Gerald Herbert)

Also on the way, Trump said, was more hydroxychloroquine. Limited studies have suggested the antimalarial drug could, in fact, treat coronavirus. Journalists who previously bashed the Trump administration for suggesting hydroxychloroquine have largely changed their tune.

Michigan Gov. Gretchen Whitmer, a Democrat, went from threatening doctors who prescribed the drug with "administrative action" to requesting that the federal government ship her state some. Other state leaders have followed suit, including Nevada Gov. Steve Sisolak, also a Democrat. And, an international poll of thousands of doctors rated hydroxychloroquine the “most effective therapy” for coronavirus.

"We've bought a tremendous amount of the hydroxychloroquine," Trump told reporters, saying the country has stockpiled 29 million pills of the drug. "There are some signs it works on this, some very strong signs. ... They're not expensive. What do you have to lose?"

The president noted he's "not a doctor," but observed that the Food and Drug Administration [FDA] had issued emergency authorization for physicians to use the drug to treat coronavirus.

Pressed on whether he was irresponsibly offering medical advice, the president insisted he's "not acting as a doctor," and said there were "good signs" the drug could save lives -- and at worse, it wouldn't cause deaths on its own. The drug requires a prescription regardless.

In a surreal moment, a reporter then bizzarely queried Trump as to why all businesses, including essential ones like grocery stores, weren't forced to immediately close.

Trump opened the briefing by offering words of hope for British Prime Minister Boris Johnson, who was hospitalized Sunday after testing positive for coronavirus and exhibiting symptoms.

"All Americans are praying for him," Trump said. "I'm hopeful and sure that he's going to be fine. He's a strong man, a strong person."

Asked by a reporter whether he was thinking of standing apart from Pence "to ensure continuity of government," Trump responded that "sometimes we are forced into positions where I'd rather be away," but that it was "very difficult" sometimes to keep his distance from everyone else.

The president said he was considering "very substantial tariffs" on foreign oil if the current price war were to continue.

Trump added: "I'd like to ask for your prayers for the families who have lost loved ones. Ask God to comfort them in their hour of grief -- it's a great hour of grief, for our nation and for the world. ... With the faith of our families and the spirit of our people and the grace of our God, we will endure, we will overcome, we will prevail. We have learned so much; we will be stronger than ever.”

The president also touted the news that New York state has seen its first drop in daily coronavirus deaths, as U.S. Northern Command officials said it would deploy a combined total of 1,000 Air Force and Navy medical providers to the New York City area to support relief efforts in the next three days. 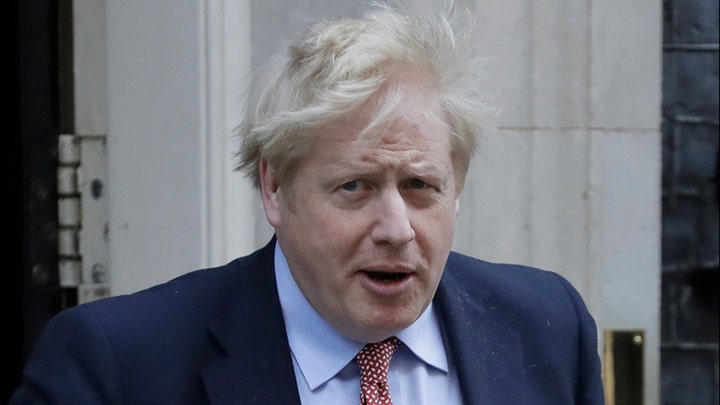 New York Gov. Andrew Cuomo, a Democrat, said earlier in the day that New York also experienced a slight drop in intensive-care admissions and the number of patients who need breathing tubes inserted. The hospital discharge rate was "way up" he said, calling it "great news."

"We sent federal troops -- not only troops, but a lot of talented doctors, nurses, first responders," Trump said.

The military said in a statement that the 1,000 personnel would work in support of the Federal Emergency Management Agency [FEMA]. A total of 300 of these "uniformed medical providers will work from the Javits Center and the rest will deploy to other area locations to expand local medical capabilities in the war against COVID-19," U.S. Northern Command added.

Americans were bracing for what the nation's top doctor warned Sunday would be “the hardest and saddest week” of their lives while Britain assumed the unwelcome mantle of the deadliest coronavirus hotspot in Europe after a record 24-hour jump in deaths that surpassed even hard-hit Italy.

"This is going to be our Pearl Harbor moment, our 9/11 moment,’’ U.S. Surgeon General Jerome Adams told "Fox News Sunday."