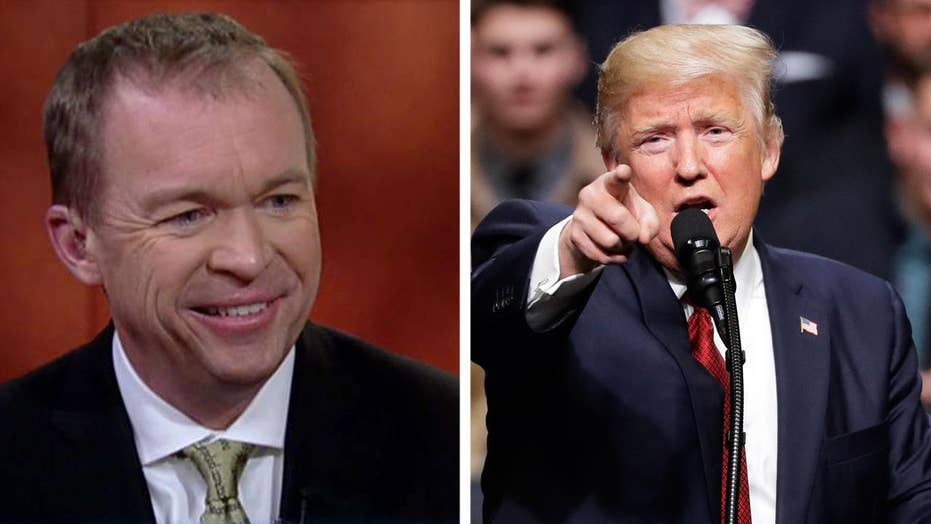 President Trump on Thursday morning released a $1.15 trillion budget proposal that seeks a major increase in military and other security spending while slashing spending for a wide range of other agencies including the EPA and State Department.

“We are going to do more with less, and make the government lean and accountable to the people,” Trump said in a statement, calling for $54 billion in “reductions to non-Defense programs” to offset the additional defense spending.

In a budget blueprint called “America First,” Trump said this would include “deep cuts to foreign aid.”

“It is time to prioritize the security and well-being of Americans, and to ask the rest of the world to step up and pay its fair share,” Trump said.

The $54 billion, 10 percent boost for the military is the largest since President Ronald Reagan's Pentagon buildup in the 1980s, promising immediate money for troop readiness, the fight against Islamic State militants and procurement of new ships, fighter jets and other weapons.

The proposal also makes a hefty down payment on Trump’s sought-after southern border wall, seeking an immediate $1.4 billion infusion in the ongoing fiscal year, with another $2.6 billion planned for the 2018 budget year starting Oct. 1.

On the other side, the budget goes after frequent targets of the party's staunchest conservatives, eliminating the National Endowment for the Arts, legal aid and heating assistance for low-income Americans, and the AmeriCorps national service program established by former President Bill Clinton.

Lawmakers will have the final say on Trump's proposal in the arduous budget process, and many of the cuts will be deemed dead on arrival. Mulvaney acknowledged to reporters that passing the cuts could be an uphill struggle and said the administration would negotiate over replacement cuts.

The battle was joined almost immediately on Capitol Hill.

He said in a statement, “Once again the Trump administration is showing its true colors: talk like a populist but govern like a special interests zealot. … Democrats in Congress will emphatically oppose these cuts and urge our Republican colleagues to reject them as well.”

“I welcome the president’s blueprint for next year’s budget, which turns the page from the last eight years,” he said. “We are determined to work with the administration to shrink the size of government, grow our economy, secure our borders, and ensure our troops have the tools necessary to complete their missions. I look forward to reviewing this with the Appropriations Committee and our entire conference.”

The Trump proposal covers only a quarter of the roughly $4 trillion federal budget -- representing the “discretionary” portion that Congress passes each year. It doesn't address taxes, Social Security, Medicare and Medicaid, or make predictions about deficits and the economy. Those big-picture details are due in mid-May, and are sure to show large -- probably permanent -- budget deficits. Trump has vowed not to cut Social Security and Medicare and is dead set against raising taxes.

While law enforcement agencies like the FBI would be spared in the budget plan, 12 of the government's 15 Cabinet agencies would absorb cuts under the president's proposal. The biggest losers are Agriculture, Labor, State, and the Cabinet-level EPA.

The plan calls for cutting the EPA by 31 percent over current levels. More than 3,000 EPA workers would lose their jobs and programs such as Obama's Clean Power Plan, which would tighten regulations on emissions from power plants seen as contributing to global warming, would be eliminated. Popular EPA grants for state and local drinking and wastewater projects would be preserved, however, even as research into climate change would be eliminated.

At the State Department and U.S. Agency for International Development, Trump seeks a 28 percent reduction. This will have a big impact on foreign aid, but the plan says this would “free up funding for critical priorities here at home and put America first.”

The budget also increases user fees, boosting the airline ticket tax by $1 per one-way trip. It would also slash subsidies for the federal flood insurance program that's a linchpin for the real estate market, especially in coastal southern states and the Northeast.

Trump's proposal will face resistance from Capitol Hill, and not just with opposition Democrats outraged over cuts to pet programs such as renewable energy, climate change research and rehabilitation of housing projects.

Republicans like Sen. Rob Portman of Ohio are irate over planned elimination of a program to restore the Great Lakes. Top Republicans like Majority Leader Mitch McConnell of Kentucky and Senate Foreign Relations Committee Chairman Bob Corker of Tennessee are opposed to drastic cuts to foreign aid. And even GOP defense hawks like Armed Services Committee Chairman Mac Thornberry of Texas aren't satisfied with the $54 billion increase for the military.

Before the two sides go to war over Trump's 2018 plan, they need to clean up more than $1.1 trillion in unfinished agency budgets for the current year. A temporary catchall spending bill expires April 28; negotiations have barely started and could get hung up over Trump's request for the wall and additional border patrol and immigration enforcement agents, just for starters.

Some of the most politically sensitive domestic programs would be spared, including food aid for pregnant women and their children, housing vouchers for the poor, aid for special education and school districts for the poor, and federal aid to historically black colleges and universities.

But the National Institutes of Health would absorb a $5.8 billion cut despite Trump's talk in a recent address to Congress of finding "cures to the illnesses that have always plagued us." Subsidies for airlines serving rural airports in Trump strongholds would be eliminated. It would also shut down Amtrak's money-losing long-distance routes and kill off a popular $500 million per-year "TIGER Grant" program for highway projects created by Obama.