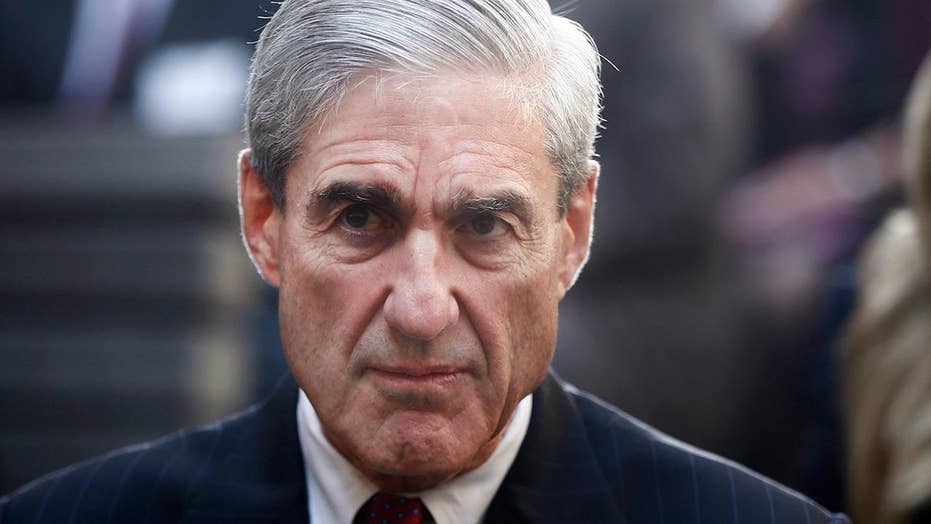 Secret grand jury testimony and information related to ongoing investigations will be removed from the report before it can be made public; Doug McKelway reports from Washington.

Following the revelation that Special Counsel Robert Mueller unearthed no evidence that President Trump or his campaign colluded with Russia to sway the 2016 election, Trump allies are now awaiting the results of two long-running internal probes that could expose the backstory behind the Russia probe's beginnings -- and provide more detail on already-documented misconduct among top FBI and DOJ officials.

DOJ Inspector General (IG) Michael Horowitz confirmed at a panel discussion last week that his office is continuing to review potential surveillance abuses by the FBI, a review that began last March and that Fox News is told is nearing completion. Horowitz has previously found that senior FBI officials routinely leaked information without authorization to the media, and also received "improper gifts" from reporters, including meals and sporting event tickets. Most notably, Horowitz found that FBI officials' anti-Trump communications raised doubts as to the integrity of their work.

Republicans, meanwhile, are increasingly looking for answers from U.S. Attorney for Utah John Huber, who was appointed a year ago by former Attorney General Jeff Sessions to review not only surveillance abuses by the FBI and DOJ, but also authorities' handling of the probe into the Clinton Foundation. Huber, Republicans have cautioned, has apparently made little progress, and spoken to few key witnesses and whistleblowers.

But in January, then-Acting Attorney General Matthew Whitaker reportedly indicated at a private meeting that Huber's work was continuing apace.

Among the primary looming questions that the IG has said he will address, and that Huber is expected to review: Did the FBI follow all applicable "legal requirements" when FBI lawyer Lisa Page and then-Deputy Director Andrew McCabe obtained a Foreign Intelligence Surveillance Act (FISA) warrant to surveil Trump aide Carter Page -- weeks before the 2016 presidential election -- by relying heavily on a dossier created by a firm working for the Hillary Clinton campaign and the Democratic National Committee (DNC)?

Internal text messages exclusively published last week by Fox News showed that a senior DOJ official apparently battled with the FBI over the political bias of the author of the dossier, British ex-spy Christopher Steele. The unverified dossier was eventually published by BuzzFeed News, fueling months of speculation about the Trump team's alleged ties to Russia -- even though key assertions in the dossier have since been contradicted or proven entirely unsubstantiated.

The texts also showed FBI brass circulating a Mother Jones article, among others, that racheted up media attention on Carter Page's supposed links to Russian officials and ominously warned of a "Russian Operation to Cultivate Donald Trump." One anti-Trump blog post circulated by Lisa Page, which she said had "surely" been read by then-FBI Director James Comey, called Trump a "useful idiot" for Russian President Vladimir Putin. Another, which Lisa Page called a "must read," characterized Trump as a national security threat.

Carter Page, who is not related to Lisa Page, has not been charged with any wrongdoing despite more than a year of federal surveillance, and he is now suing multiple actors, including the Democratic National Committee, for defamation.

In its FISA application, the FBI incorrectly assured the FISA court that a Yahoo News article provided an independent basis to surveil Page, even though Steele was the source of the Yahoo News article. The FISA application also did not make clear that the Steele application had been funded by Fusion GPS, a firm retained by the Clinton team -- it instead only stated that Steele's work was done in connection with a campaign.

The text messages also revealed that, just days after Trump said during an October 2016 presidential debate that a special prosecutor should investigate the tens of thousands of emails deleted from Hillary Clinton's private email server, Lisa Page pushed for the FISA warrant to monitor the Trump aide.

"We have a FISA-related review that people might have heard about that the deputy attorney general asked us to take a look at," Horowitz told attendees at a Washington, D.C. event organized by the Atlantic Council. He took no further questions on the topic. Although only the government presents a case at FISA warrant hearings, defendants retain their constitutional rights against unlawful searches, and DOJ guidelines preclude the FBI from omitting exculpatory evidence, or misrepresenting sources, in FISA applications.

Separately, federal investigators are also continuing their review of systemic leaks at all levels of the FBI. Former FBI Acting Director McCabe was fired from the bureau in March 2018 after it was determined he lied to FBI investigators and Comey about a leak four times, including under oath, and a grand jury has been impaneled to investigate the matter.

McCabe, officials say, authorized a leak to a newspaper reporter about the contents of a telephone call on August 2016 in order cast himself in a positive light in the upcoming story about an investigation involving Hillary Clinton. While McCabe had the authority to authorize such a disclosure, the IG determined that the authorization was aimed at advancing his own rather than the bureau’s interests.

DOJ investigators have also uncovered a slew of unauthorized contacts between FBI agents and reporters. Remarkably, at least two unauthorized phone calls to reporters came from an "unattributed FBI HQ phone number," the IG said last year -- suggesting that some employees at the bureau were brazenly leaking information from phones in the agency's headquarters in Washington, D.C.

Huber's mysterious investigation, meanwhile, has been dogged by allegations that he has not interviewed witnesses who could shed light on those topics. In a January letter to Mr. Huber, Ohio GOP Rep. Jim Jordan and Georgia GOP Rep. Doug Collins said they interviewed dozens of witnesses while his probe was simultaneously running.

“During the course of our extensive investigation we have interviewed more than a dozen current and former DOJ and FBI personnel, and were surprised to hear none of these potentially informative witnesses testified to speaking with you,” Jordan, the ranking member of the House Judiciary Committee, and Collins, the ranking member of the House Oversight and Government Reform Committee, wrote to Huber.

In an interview with The Washington Times last October, Jordan emphasized his bafflement: “I would just like to know what he’s doing. I’ll take anything. All I know is that we haven’t heard a single thing about what he’s doing.”

Republicans have charged that John Huber, the U.S. Attorney assigned to probe the FBI's handling of Clinton and FISA matters, has not done his job. (Official government photo.)

In a deep dive published late last year, RealClearInvestigations reported that Huber's appointment was internally seen as little more than a political effort to placate Republicans.

“At the time, people wanted a special counsel, but Jeff Sessions announced he brought in Huber and people said, ‘OK, we got Huber on it,’" former Justice Department prosecutor Victoria Toensing told the outlet. “But it was a head fake.”

Toensing added: “It’s a farce. It's an embarrassment how this has been handled.” (Weeks later, Whitaker reportedly told former Attorney General Ed Meese over breakfast, in a meeting first reported by the Associcated Press, that Huber's work was ongoing.)

Carter Page told The Washington Times late last year that he had not spoken to Mr. Huber, but was eager to do so.

Justice Department official Bruce Ohr also told Congress in August that he had not spoken with Huber. Ohr effectively served as a back channel between Steele and the FBI, after the FBI dropped Steele as a source for leaking to the media.

New details, nevertheless, have emerged about the FBI's handling of its investigation into the Clinton Foundation -- ostensibly an area of focus for Huber. Among the key new information: The Justice Department "negotiated" an agreement with Clinton's legal team in 2016 that ensured the FBI did not have access to emails on her private servers relating to the Clinton Foundation.

Former FBI special agent Peter Strzok, who was fired for breaking FBI protocol by sending numerous anti-Trump text messages on his government-issued phone while working as the No. 2 official on the Clinton and Trump investigations, first acknowledged the arrangement during a secretive closed-door appearance before the House Judiciary Committee last summer.

Even aside from the probes by Huber and the IG, Republicans on Monday called for new inquiries, including a special counsel to probe "the other side of the story." Mueller's probe, conservatives noted, produced multiple indictments for "process crimes" -- including lying to federal authorities -- but no evidence of collusion by any American with Russia. Some individuals who admitted to lying to investigators about the full extent of their communications with Russians, including former National Security Adviser Michael Flynn, had also lied to Trump administration officials about the same topic.

“I’d like to find somebody, like a Mr. Mueller, that can look into what happened with the FISA warrants, the counterintelligence investigation," Senate Judiciary Committee Chairman Lindsey Graham, R-S.C., said Monday. "Am I right to be concerned? It seems pretty bad on its face—but there are some people that are never going to accept the Mueller report, but by any reasonable standard, Mueller thoroughly investigated the Trump campaign. You cannot say that about the other side of the story."

Graham added: “I hope Mr. Barr will appoint somebody outside the current system to look into these allegations, somebody we all trust, and let them do what Mueller did,” he continued, adding that he has been calling for the appointment of a second special counsel since 2017 to investigate “whether or not a counterintelligence investigation was opened as a back door to spy on the Trump campaign.”

“A counterintelligence investigation is designed to protect the entity being targeted by a foreign power…I still am at a loss as to why nobody went to President Trump to tell him,” Graham told reporters.