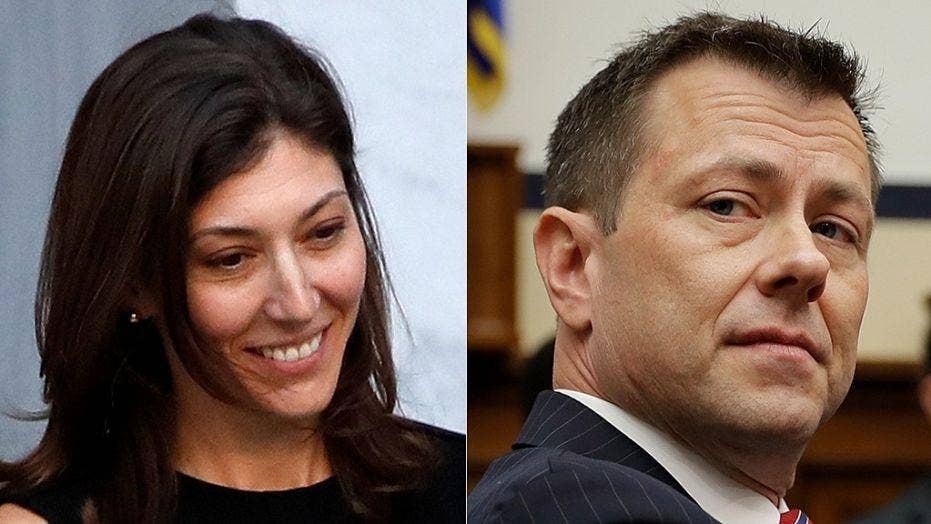 New text messages between ex-FBI employees Peter Strzok and Lisa Page reveal others were "leaking like mad" in the run-up to the Trump-Russia collusion probe, according to new communications between the former lovers obtained exclusively by Fox News.

“Oh, remind me to tell you tomorrow about the times doing a story about the rnc hacks,” Page texted Strzok.

“And more than they already did? I told you Quinn told me they pulling out all the stops on some story…” Strzok replied.

A source told Fox News “Quinn” could be referring to Richard Quinn, who served as the chief of the Media and Investigative Publicity Section in the Office of Public Affairs. Quinn could not be reached for comment.

Strzok again replied: “Think our sisters have begun leaking like mad. Scorned and worried, and political, they’re kicking into overdrive.”

In one passage, Strzok apparently misreads a reference to "rnc" as "mc," and then, realizing his error, blames "old man eyes."

It is unclear at this point to whom Strzok was referring when he used the term “sisters.”

'Think our sisters have begun leaking like mad. Scorned and worried, and political, they’re kicking into overdrive.'

Retired FBI special agent and former FBI national spokesman John Iannarelli told Fox News it could be a reference to another government agency.

“Sisters is an odd phrase to use,” Iannarelli told Fox News Wednesday. “It could be any intelligence agency or any other federal law enforcement agency. The FBI works with all of them because, post 9/11, it’s all about cooperation and sharing.”

There are 17 agencies in the Intelligence Community, including the CIA, the Office of the Director of National Intelligence, the National Security Agency, and the FBI.

The “leaking like mad” text came on the same day that several news outlets reported that U.S. intelligence officials said they were convinced that Russian President Vladimir Putin was personally involved, and approved Russian meddling in the 2016 presidential election.

Following the text about “sisters leaking,” Strzok wrote to Page:

“And we need to talk more about putting C reporting in our submission. They’re going to declassify all of it…”

Page replied: “I know. But they’re going to declassify their stuff, how do we withhold…”

“We will get extraordinary questions. What we did what we’re doing. Just want to ensure everyone is good with it and has thought thru all implications,” Strzok wrote. “CD should bring it up with the DD.”

A source told Fox News that “C” is likely in reference to classified information, whereas “CD” is Cyber Division, and DD could refer to former FBI Deputy Director Andrew McCabe.

McCabe was fired by Attorney General Jeff Sessions in March for making an unauthorized disclosure to the news media, and "lacked candor" under oath on multiple occassions.

It is unclear what “submission” Strzok and Page were referring to.

A source told Fox News that the messages were part of a newly released batch of Strzok-Page communications from Justice Department Inspector General Michael Horowitz, uncovered as part of his investigation into the start of the FBI’s Russia investigation.

A spokesman for the inspector general declined to comment to Fox News.

Strzok and Page were first brought into the spotlight last December, when it was revealed that Horowitz discovered a series of anti-Trump text messages between the two officials, who were romantically involved.

Strzok and Page both served on Special Counsel Robert Mueller’s team investigating Russian meddling and potential collusion with Trump campaign associates in the 2016 presidential election. Page served on the special counsel’s team on a short detail, returning back to the FBI’s Office of General Counsel in July 2017.

The discovery of the anti-Trump messages exchanged with Page ultimately got Strzok booted from Mueller’s team and reassigned last year to the FBI’s office of human resources.

In July, Strzok lost his security clearance and was escorted from his FBI office. In August, Strzok was officially fired from the FBI.

Both Strzok and Page testified on Capitol Hill this summer.

Horowitz released a 600-page report on the FBI’s handling of the investigation into Hillary Clinton’s use of a private email server while conducting official business as secretary of state.

The inspector general report found that some bureau officials “appeared to mix political opinion with discussions about the MYE investigation.” MYE refers to Midyear Exam, which was the FBI’s code word for the Clinton probe.

Horowitz confirmed in June that he is currently investigating whether Strzok’s anti-Trump bias factored into the launch of the bureau’s Russia investigation.