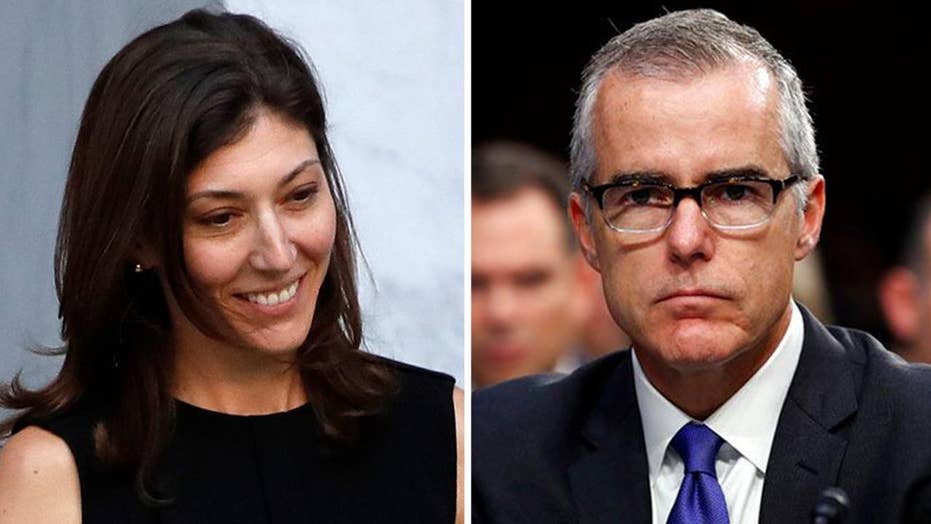 Just nine days before the FBI applied for a Foreign Intelligence Surveillance Act (FISA) warrant to surveil a top Trump campaign aide, bureau officials were battling with a senior Justice Department official who had "continued concerns" about the "possible bias" of a source pivotal to the application, according to internal text messages obtained by Fox News.

Another article, sent by Page in July 2016 as the FBI's counterintelligence probe into Russian election interference was kicking off, flatly called Trump a "useful idiot" for Russian President Vladimir Putin. Page told McCabe that then-FBI Director James Comey had "surely" read that piece. Both articles were authored in whole or part by Benjamin Wittes, a Comey friend.

Further, the texts show that on Sept. 12, 2016, Page forwarded to McCabe some "unsolicited comments" calling then-GOP Rep. Trey Gowdy a "total d--k." Gowdy, at the time, was grilling FBI congressional affairs director Jason Herring at a hearing on the FBI's handling of the Clinton email investigation.

But perhaps the most significant Page-McCabe communications made plain the DOJ's worries that the FISA application to surveil Trump aide Carter Page was based on a potentially biased source -- and underscored the FBI's desire to press on.

Fox News is told the texts were connected to the ultimately successful Page application, which relied in part on information from British ex-spy Christopher Steele – whose anti-Trump views are now well-documented – and cited Page’s suspected Russia ties. In its warrant application, the FBI assured the FISA court on numerous occasions that other sources independently corroborated Steele's claims but did not clearly state that Steele worked for a firm hired by Hillary Clinton's campaign.

Carter Page has not been charged with any wrongdoing despite more than a year of federal surveillance, and he has since sued numerous actors -- including the Democratic National Committee (DNC) -- for defamation related to claims that he worked with Russia.

"OI [Office of Intelligence] now has a robust explanation re any possible bias of the chs [confidential human source] in the package," Lisa Page wrote to McCabe on Oct. 12, 2016. "Don't know what the holdup is now, other than Stu's continued concerns."

It's unclear whether the confidential source in question was Steele or another individual. "Stu" was an apparent reference to Stuart Evans, then the DOJ's National Security Division deputy assistant attorney general. In one previously unearthed and since-unredacted text message, former FBI Special Agent Peter Strzok texted Lisa Page that he was "Currently fighting with Stu for this FISA" in late 2016.

"Strong operational need to have in place before Monday if at all possible, which means to ct tomorrow," Page added. "I communicated you and boss's green light to Stu earlier, and just sent an email to Stu asking where things stood. This might take a high-level push. Will keep you posted."

Minutes later, Page sent another urgent text to McCabe: "If I have not heard back from Stu in an hour, I will invoke your name to say you want to know where things are, so long as that is okay with you."

Did FBI retaliate against Trump for firing James Comey?

Former FBI assistant director Chris Swecker reacts to report that the FBI opened an inquiry into whether President Trump was a Russian agent.

On Oct. 14, 2016, Page again wrote to McCabe, this time concerning a meeting with the White House.

“Just called," Page said to McCabe. "Apparently the DAG [Deputy Attorney General Sally Yates] now wants to be there, and WH wants DOJ to host.  So we are setting that up now.  ... We will very much need to get Cohen’s view before we meet with her.  Better, have him weigh in with her before the meeting. We need to speak with one voice, if that is in fact the case.” ("Cohen" is likely then-Deputy CIA Director David Cohen.)

McCabe responded within the hour: "Thanks. I will reach out to David." On Oct. 19, Page wrote to McCabe that the "meeting with WH counsel is finally set up."

Lisa Page did not respond to Fox News' inquiries as to whether the meeting was designed to brief the White House on the FISA application or some other matter. Page also did not reply to Fox News' inquiries about the DOJ's concerns over the FISA application, or dispute that the texts related to the Carter Page warrant application. McCabe and the FBI declined to comment. Fox News has also reached out to the DOJ for comment.

The FISA application eventually filed by the FBI on Oct. 21, 2016 stated, "The F.B.I. believes [Carter] Page has been the subject of targeted recruitment by the Russian government."

The FBI went on to allege that Carter Page "has established relationships with Russian government officials, including Russian intelligence officers," and that the FBI believed "the Russian government’s efforts are being coordinated with [Carter] Page and perhaps other individuals associated with” Trump's campaign. Page, the FBI told the FISA court, “has been collaborating and conspiring with the Russian government.”