Justice Department Inspector General Michael Horowitz's bombshell report on DOJ and FBI actions during the Hillary Clinton email probe takes particular aim at key figures who, until now, have mostly escaped official censure for their conduct while in office.

The DOJ watchdog reviewed a variety of critical decisions over the course of the investigation -- including how authorities conducted the summer 2016 interview with Clinton, and why top FBI and DOJ officials with political connections didn't immediately recuse themselves from the probe.

Horowtiz's report also outlines new information concerning apparent bias at the FBI and DOJ that he says undermines the public trust in each agency.

Some of the key takeaways from the report include:

1. New texts between FBI lovers Strzok and Page were 'disappointing' and cast a shadow over the integrity of the entire Clinton email probe

The report unearths striking new messages between the pair that were sent and received on government devices, including one in which Strzok vows to "stop" Trump from being elected just months before the presidential election.

While Horowitz noted that there is no available evidence that political considerations directly impacted investigative decisions in the Clinton probe, and that Strzok was not the "sole" decision maker on any key investigative actions, he concluded the officials' behavior was still highly inappropriate.

FBI officials Peter Strzok and Lisa Page communicated at length about their disdain for President Trump during the probe. (Official photo / File)

"We recognize that these text and instant messages cast a cloud over the FBI’s handling of the Midyear investigation and the investigation’s credibility," the IG report said.

MYE, or "Midyear Exam," was the code used in the FBI to refer to the investigation into Clinton’s private email server.

Horowitz also published additional texts between the lovers that he called "notable," including one in which Page admits the two used their FBI phones to conceal their extramarital affair from their spouses.

2. Five unnamed FBI employees -- including one lawyer who later worked on the Mueller probe -- are under scrutiny for anti-Trump bias

Strzok and Page are not the only FBI officials who evidenced anti-Trump bias during the Clinton email probe, Horowitz noted in the report.

The watchdog identified five other unnamed individuals, including two agents and one FBI attorney who worked on Special Counsel Robert Mueller's Russia probe until earlier this year, who made "statements of hostility toward then-candidate Trump and statements of support for candidate Clinton," and improperly mixed "political opinions" with case-related discussions.

"The damage caused by their actions ... goes to the heart of the FBI’s reputation for neutral factfinding and political independence."

"Instant messages exchanged between Agent 1, who was one of the four Midyear case agents, and Agent 5, who was a member of the filter team," as well as "instant messages sent by FBI Attorney 2, who was assigned to the Midyear investigation," are specifically flagged in the IG report.

The filter team was assigned to review documents for potential privilege issues, such as attorney-client matters.

"We found that the conduct of these five FBI employees brought discredit to themselves, sowed doubt about the FBI’s handling of the Midyear investigation, and impacted the reputation of the FBI," the IG said.

According to the IG report, one FBI attorney who was later assigned to Mueller's Russia probe until earlier this year messaged another colleague “Viva le resistance” after Trump's election. The attorney acknowleged the message could create the "perception" of bias.

Another unnamed agent called Trump supporters "retarded," according to the IG report.

Again, the IG report noted that it was unable to connect the officials' apparent political bias to specific investigative decisions. Nevertheless, the IG referred the five FBI officials for further investigation.

3. President Obama was one of the 13 individuals with whom Hillary Clinton had direct contact using her clintonemail.com account

In a footnote, the IG notes that "FBI analysts and Prosecutor 2 told us that former President Barack Obama was one of the 13 individuals with whom Clinton had direct contact using her clintonemail.com account."

The information would suggest that Obama may have known about Clinton's private server, despite his claim in 2015 that he learned about it "the same time everybody else learned it, through news reports."

But the IG report revealed that intelligence analysts questioned whether Obama's correspondence with Clinton on her private server contained classified information, before a formal classification review determined that the emails did not. Obama used a fake name for the communications.

Separately, the IG asked investigators why they made no effort to obtain the personal devices that Clinton’s senior aides were using at the State Department, since those devices were "potential sources of Clinton's ... classified emails" or places where unauthorized classified emails were being stored.

In response, officials on the probe claimed that "the culture of mishandling classified information at the State Department" was so pervasive that it "made the quantity of potential sources of evidence particularly vast" -- a rationale that the IG implied was unconvincing, because investigators could simply have obtained personal devices for a handful of key Clinton aides.

Investigators also claimed the State Department would be the better agency to handle that kind of deep dive into Clinton's emails.

In the end, Horowitz concluded that the issue was a "judgment call" and that there was no evidence improper political considerations influenced investigators' decisions.

Former FBI Deputy Director Andrew McCabe's wife had connections to top Democrats during the Clinton probe, and a better system might have brought his conflicts to light earlier, the IG found. (AP)

Kadzik exercised "poor judgment" by failing to immediately recuse himself as the Clinton probe unfolded, even after he sought employment for his son at her campaign, the watchdog wrote.

Additionally, Kadzik's decision to provide Clinton campaign chair John Podesta the schedule for a court-ordered release of some of Clinton's emails "raised a reasonable question about his ability to act impartially on Clinton-related matters in connection with his official duties" -- even though it later became clear the information was public.

"Though Kadzik said he told his deputies ... that he was recused, emails show that Kadzik subsequently sent and received emails about Clinton-related matters," Horowitz wrote.

Meanwhile, McCabe, whose wife Jill has ties to then-Democratic Gov. Terry McAuliffe and unsuccessfully sought a state Senate seat in Virginia in 2015 as a Democrat, was not obligated to recuse himself during the probe, the IG report found.

Former FBI Director James Comey had an apparently strong desire to avoid confronting authority figures with his concerns about their behavior, even as he nurtured a habit of going around the chain of command and violating long-standing departmental policies, the IG report found. 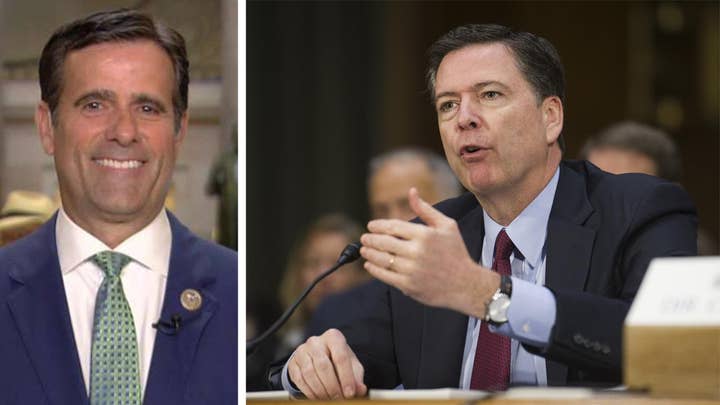 In testimony before Congress and elsewhere, for example, Comey claimed that he had been pressured by former Obama Attorney General Loretta Lynch to call the Clinton investigation a "matter" in 2015, rather than an investigation.

But Horowitz noted that others present who heard Lynch's instruction did not interpret her as trying to downplay the investigation, but instead to standardize language for personnel purposes. Perhaps more significantly, the IG report found that Comey seemed to have kept his concerns entirely to himself.

Comey, whom President Trump has called a "slimeball," also failed to act appropriately on his concerns about the infamous airport tarmac meeting between Lynch and former President Bill Clinton in the waning days of the email probe, according to Horowitz.

But the IG's most substantial criticisms of Comey centered around his decision to stage a dramatic news conference in the summer of 2016, in which he announced that "no reasonable prosecutor" would bring criminal charges against Hillary Clinton, even as he acknowledged she had been "extremely careless" in her handling of classified information."

"Comey’s unilateral announcement was inconsistent with Department policy, usurped the authority of Attorney General, and did not accurately describe the legal position of the Department prosecutors," the IG report said.

The ex-FBI director made a similarly "serious error in judgment" by sending a letter to Congress announcing the reopening of the Clinton probe just days before the 2016 presidential election, according to the report.

"We found that it was extraordinary and insubordinate for Comey to conceal his intentions from his superiors, the Attorney General and Deputy Attorney General, for the admitted purpose of preventing them from telling him not to make the statement, and to instruct his subordinates in the FBI to do the same."

The rebuke was a particularly scathing one for Comey, who has cultivated his image as a responsible and strong leader since leaving office.

Horowitz also charged that Lynch similarly made multiple errors in judgment during the probe.

The DOJ watchdog was especially critical not just of Lynch's decision to hold court with the president on the Phoenix tarmac, but also her decision to retain involvement in the probe despite the appearance of bias.

"Although we found no evidence that Lynch and former President Clinton discussed the Midyear investigation or engaged in other inappropriate discussion during their tarmac meeting on June 27, 2016, we also found that Lynch’s failure to recognize the appearance problem created by former President Clinton’s visit and to take action to cut the visit short was an error in judgment," the IG wrote.

Lisa Page, the special counsel to the deputy director of the FBI, sent messages to Strzok, McCabe, and another FBI employee suggesting that the agency limit the number of people attending the critical in-person interview with Clinton as the investigation wrapped up, the IG report said.

Page's chief consideration was that Clinton would be angry at the FBI upon becoming president, which the IG flags as an "inappropriate" consideration.

“[S]he might be our next president," Page wrote, in urging that the number of people at the interview be limited to four or six. "The last thing you need us going in there loaded for bear. You think she’s going to remember or care that it was more doj than fbi?”

LAWMAKERS FROM BOTH PARTIES SLAM FBI AFTER IG REPORT RELEASED

While the IG report found that Page's text did not appear to influence the number of attendees at the Clinton interview, since eight officials attended from the FBI and DOJ, the report nonetheless said her considerations were improperly political.

"Suggesting that investigative decisions be based on this consideration was inappropriate and created an appearance of bias," the IG wrote.

Additionally, the IG notes that it was "inconsistent with typical investigative strategy" for the FBI to allow former Clinton chief of staff Cheryl Mills and ex-campaign staffer Heather Samuelson to sit in on the Clinton interview.

"We questioned why the Department and FBI allowed Mills and Samuelson, two percipient witnesses (one of whom, Mills, herself had classified information transit through her unclassified personal email account) attend Clinton’s interview, even if they had also both served as lawyers for Clinton after they left the State Department," the IG wrote.

While the report does not definitively find that political bias motivated the decision to allow Mills and Samuelson in the interview, "it recommends improvements to the DOJ and FBI's handling of similar situations in the future.

"[T]here are serious potential ramifications when one witness attends another witness’s interview," the IG notes.