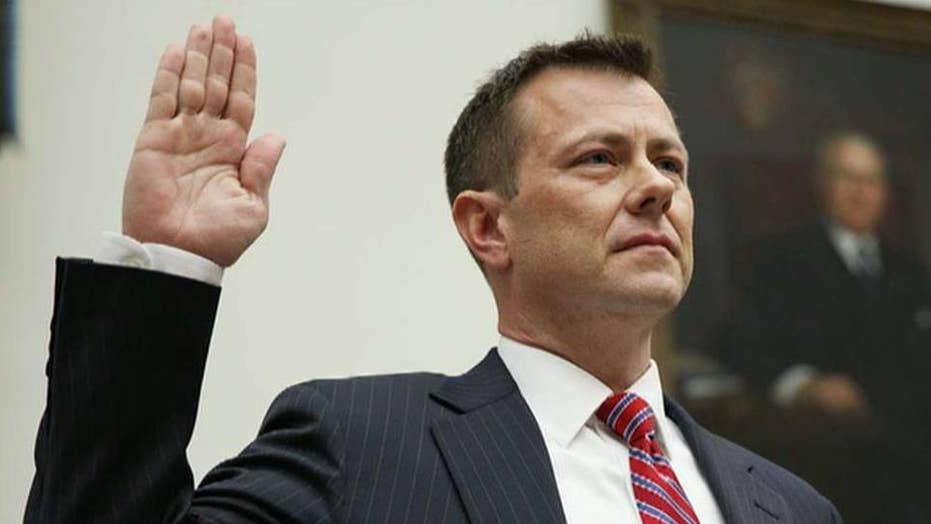 The Justice Department 'negotiated' an agreement with Hillary Clinton's legal team to block FBI access to emails on her private server regarding the Clinton Foundation, according to testimony from former FBI special agent Peter Strzok; Catherine Herridge has the details.

The Justice Department "negotiated" an agreement with Hillary Clinton's legal team that ensured the FBI did not have access to emails on her private servers relating to the Clinton Foundation, former FBI special agent Peter Strzok testified during a closed-door appearance before the House Judiciary Committee last summer, according to a newly released transcript.

Republicans late last year renewed their efforts to probe the Clinton Foundation, after tax documents showed a plunge in its incoming donations after Clinton’s 2016 presidential election. The numbers fueled longstanding allegations of possible “pay-to-play” transactions at the organization, amid a Justice Department probe covering foundation issues.

Under questioning from Judiciary Committee General Counsel Zachary Somers, Strzok acknowledged that Clinton's private personal email servers contained a mixture of emails related to the Clinton Foundation, her work as secretary of state and other matters.

"Were you given access to [Clinton Foundation-related] emails as part of the investigation?" Somers asked

CLINTON FOUNDATION WHISTLEBLOWERS HAVE COME FORWARD. WHAT ARE THEY SAYING?

"We were not. We did not have access," Strzok responded. "My recollection is that the access to those emails were based on consent that was negotiated between the Department of Justice attorneys and counsel for Clinton."

Although the FBI eventually took possession of the servers, Strzok continued, the possession was "based upon the negotiation of Department of Justice attorneys for consent."

"A significant filter team" was employed at the FBI, Strzok said, to "work through the various terms of the various consent agreements." Limitations imposed on agents' searches included date ranges, and names of domains and people, Strzok said, among other categories.

Strzok did not elaborate on whether prosecutors made any effort to secure a search warrant, which could have delineated precisely what agents could and could not search.

But Strzok later said that agents had access to the "entire universe" of information on the servers when using search terms to probe their contents. He also told Somers that "we had it voluntarily," although it was unclear if he meant all emails on the servers -- including ones related to the Clinton Foundation.

"They had no interest in pursuing the truth."

"What's bizarre about this, is in any other situation, there's no possible way they would allow the potential perpetrator to self-select what the FBI gets to see," Chaffetz said, noting that the FBI was aware that the servers contained classified information in unclassified settings. "The FBI should be the one to sort through those emails -- not the Clinton attorneys."

The DOJ's goal, Chaffetz said, was to "make sure they hear no evil, see no evil -- they had no interest in pursuing the truth."

Chaffetz added that the DOJ's behavior, including its award of immunity to top Clinton aides early on in the investigation, signaled a clear double standard: "They didn't go make a deal with anyone in Trump's orbit. They seized it. They used guns and agents -- and just went in there and took it."

The Clinton Foundation did not respond to Fox News' request for comment.

Republican-led concerns that the DOJ, under the Obama administration, was too cozy with the Clinton team during the 2016 presidential campaign have grown louder in recent days. Earlier this week, Fox News exclusively reviewed an internal chart prepared by federal investigators working on the so-called "Midyear Exam" probe into Clinton's emails. The chart contained the words "NOTE: DOJ not willing to charge this" next to a key statute on the mishandling of classified information.

The notation appeared to contradict former FBI Director James Comey's repeated claims that his team made its decision that Clinton should not face criminal charges independently.

But Strzok, in his closed-door interview, denied that the DOJ exercised undue influence over the FBI, and insisted that lawyers at the DOJ were involved in an advisory capacity working with agents.

Fox News also confirmed the chart served as a critical tip that provided the basis for Texas Republican Rep. John Ratcliffe's explosive questioning of former FBI lawyer Lisa Page last year, in which Page agreed with Ratcliffe's characterization that the DOJ had told the FBI that "you're not going to charge gross negligence."

A transcript of Page's remarks was published Tuesday as part of a major document release by the ranking Republican on the House Judiciary Committee, Georgia Rep. Doug Collins.

Separately in the closed-door session, Strzok defended his affair with Page, repeatedly denying that the relationship presented a security risk when challenged by GOP aides.

Strzok, who was fired from the bureau after months of scrutiny regarding anti-Trump text messages between him and Page, confirmed he was involved in an extramarital affair when asked about it during his interview before the committee on June 27, 2018. But Strzok was also asked by Art Baker, the GOP investigative counsel for the committee, whether that affair could have made him "vulnerable to potential recruitment" by "hostile intelligence service[s]."

“Yeah, I don’t think I would characterize it that way,” Strzok said. “I think it is not so much any particular action as it is the way that action might be used to coerce or otherwise get somebody to do something. I can tell you that in no way would that extramarital affair have any power in coercing me to do anything other than obeying the law and doing honest, competent investigation."