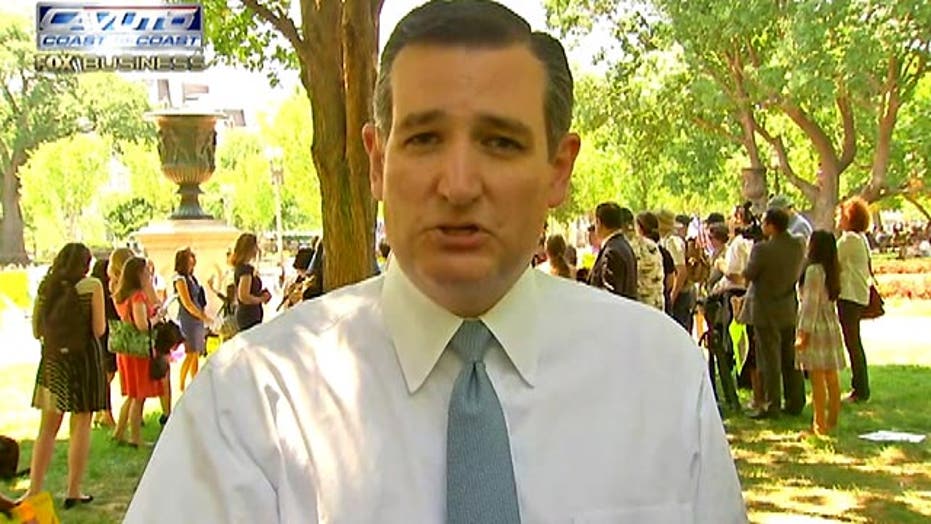 What if I told you the U.S. Senate is about to reauthorize the Export-Import Bank?

Okay, Rip Van Winkle. Hit the snooze button and roll back over.

What if I told you that Texas Sen. Ted Cruz absolutely lit up fellow Republican and Senate Majority Leader Mitch McConnell, Kentucky, in an extraordinary floor speech and accused him of lying about reauthorizing the Export-Import Bank?

Betcha don’t need a couple of cups of Dunkin’ Donuts’ Arabica bean coffee infused with a Turbo Shot now, do you?

It’s hard to imagine an issue as lethargic to the general public as renewing the Export-Import Bank.

But that doesn’t mean the future of the so-called “Ex-Im” Bank hasn’t touched off a feisty debate in the business community and on Capitol Hill.

The bank offers loans to U.S. businesses to sell products overseas. Supporters argue the institution is essential for the U.S. to compete because many other nations operate similar banks and that extinguishing the bank robs U.S. firms of that essential boost.

Conservatives decry the bank. They argue that companies should stand and fall on their own. They’ve converted the doom of the bank into a cause celebre. Congress failed to reauthorize the bank. Its charter to extend new lines of credit ceased at the end of June. However, the bank still operates, managing about 18 years’ worth of outstanding loans.

McConnell maneuvered on the Senate floor Friday morning to tee-up a vote that could lead to reauthorization. That’s what forced Cruz’s temper to flare as he incinerated the majority leader in a blistering floor speech.

“I cannot believe that (McConnell) would tell a flat-out lie,” seethed Cruz. “We now know that when the majority leader looks us in the eyes and makes an explicit commitment that he is willing to say things that he knows are false.”

It featured a prominent Republican senator running for president taking on the majority leader of his own party.

There are internal party disagreements all the time. But it’s almost unprecedented for internecine warfare to be laid bare on the Senate floor.

The chamber is usually a more genteel place, devoid of such verbal fisticuffs.

It is extremely rare for one senator to accuse another of being a liar -- let alone the majority leader.

On Friday morning, the Senate completed a procedural vote to launch debate on a bill to renew federal highway programs set to expire at the end of the month.

As is Senate custom, the majority leader gets first dibs to speak. The leader also functions as something of a parliamentary arborist. So when the Senate finished the vote, formally summoning the highway measure up for debate, McConnell seized control of the floor first and began a process of “filling the Senate amendment tree.”

Unlike the House, the Senate features an open amendment process. That means any senator can offer an amendment at any time. That is, unless the majority leader gets to the amendment tree first. Think of the bill at hand as the “trunk” of the tree. Under most circumstances, only one branch sprouts from this tree -- and a sprig extends from that limb.

Both the branch and sprig are available to have amendments deposited on them. The Senate can accommodate only two amendments at a time. The chamber must first dispense with those issues, then it gets a new tree. So McConnell filled up both of the available boughs. On one, he set up a vote to end debate on an amendment to renew the bank. On the other offshoot, he arranged a vote to halt debate on an amendment to repeal ObamaCare.

Under Senate rules, most votes to end debate on an issue (called invoking cloture) require an intervening day before they ripen. That means the Senate couldn’t conduct the procedural votes on the bank nor health care until Sunday. Both require 60 ayes.

And with that, McConnell had “filled the tree.”

For the record, McConnell and Republicans routinely railed against Senate Minority Leader Harry Reid, D-Nevada, when he commandeered the floor during the Democrats’ majority -- and often “filled the tree.” The GOP moaned that Reid had “cut off all amendments” and that Republicans never had a chance to offer their proposals.

“Did I just hear the legislative tree being filled?” asked Reid sarcastically once McConnell finished his parliamentary pruning, drawing laughter in the chamber.

But McConnell explained his gambit in an effort to finish the highway bill in the next few days.

“Perhaps the most-challenging issue now relates to amendments,” McConnell said. “Supporters of the Ex-Im Bank are demanding a vote to reauthorize it. They’ve made clear they’re ready to stop all other amendments if denied that opportunity. They’ve already proven they have the votes to back up that threat, too.”

So McConnell thought it was only fair to allow for two amendments at this stage: one on Ex-Im, which he and other conservatives abhor. But to sate the appetite of the right, he also ordered up an amendment to repeal ObamaCare.

His idea was equity, balancing an item for Democrats -- though Sen. Mark Kirk, R-Ill., is the author of the Ex-Im amendment -- with something for Republicans.

The Senate struggled to advance President Obama’s trade package. In the middle of a vote that could have killed the entire trade pact, McConnell huddled with lawmakers who wanted to renew the Ex-Im Bank.

“Mitch gave a commitment” to vote on the bank, Murray said later.

Senate Majority Whip John Cornyn, R-Texas, also signaled there was an agreement on Ex-Im when he spoke to reporters after the trade vote.

Keep in mind that in December, McConnell and Reid thought they arranged a Friday night agreement to avoid a weekend session on funding the government.

Sen. Mike Lee, R-Utah, later objected, even though McConnell had left for the night, thinking the Senate wouldn’t return until Monday.

Cruz backed Lee’s effort. When the Senate convened on Saturday, McConnell conceded he was surprised that conservative members went behind his back. But in an interview, Cruz asserted there was no agreement in that instance.

So back to Cruz on Friday and his argument that McConnell lied to him about engineering a vote on the Export-Import Bank. Cruz invoked scripture and the ternary denial of Jesus.

Cruz then ripped McConnell for filling the amendment tree, just like Reid did when he ran the Senate.

“Now we have the Republican leader behaving like the senator from Nevada,” Cruz said.

He also went on to characterize Sunday’s procedural vote on ObamaCare as “an exercise in meaningless political theatre” since it requires 60 ‘yeas’ and the Republicans are short of that threshold.

Cruz noted that the GOP had a chance to actually upend the Affordable Care Act during his filibuster prior to the government shutdown two years ago.

“The American people were told, if only we get a Republican majority in the Senate and retire Harry Reid as majority leader, then things will be different,” Cruz continued.

“The first thing we did in December is we came back and we passed a $1 trillion ‘CRomnibus’ plan filled with pork and corporate welfare” Cruz bellowed. Then this Republican majority voted to fund ObamaCare, voted to fund President Obama’s unconstitutional executive amnesty and then the leadership rammed through the confirmation of Loretta Lynch as attorney general.

“Which of those decisions would be one iota different if Harry Reid were still majority leader? Not a one. Not a one. This Senate still operates exactly the same.”

Levying such charges on the Senate floor is not only uncommon but may violate Senate rules.

Senate rule XIX states that in debate, no senator “shall, directly or indirectly, by any form of words impute to another senator or to other senators any conduct or motive unworthy of becoming a senator.”

Furthermore, the Senate requires another senator to call out Cruz if they felt his language crossed the line. That could prompt a vote to determine whether the speech was appropriate. But no senator raised the issue Friday morning.

Cruz’s decision to lash out at McConnell certainly did violate the GOP’s so-called “11th Commandment.”

President Reagan popularized the precept of “Thou shalt not speak ill of any fellow Republican.”

This postulate came after Republican-on-Republican attacks on then-Arizona Sen. Barry Goldwater during his 1964 presidential bid.

Some GOPers had beefs with Reagan himself in his 1966 California gubernatorial bid. Yet it’s ironic that Cruz himself invoked the 11th Commandment twice in recent days.

After Donald Trump made disparaging remarks about the war record of Sen. John McCain, R-Ariz., Cruz refused to criticize his GOP presidential opponent.

He told Bloomberg News he would not “go into the gutter with personal attacks impugning character.”

Cruz reiterated this in another chat with scribes.

“I recognize that folks in the press love to see Republican-on-Republican violence and so you want me to say something bad about Donald Trump,” Cruz said. “I am not going to do it.”

But that didn’t stop Cruz on Friday.

Trust is a key part of the Senate nomenclature. The majority and minority leaders must forge trust to make the Senate work. Trust and collegiality are coins of the Senate realm.

That dictum doesn’t always apply on the campaign trail.

In his presidential bid, it’s probably good politics in conservative circles for Cruz to upbraid McConnell on the Senate floor -- even if some won’t view it as sound Senate politics.