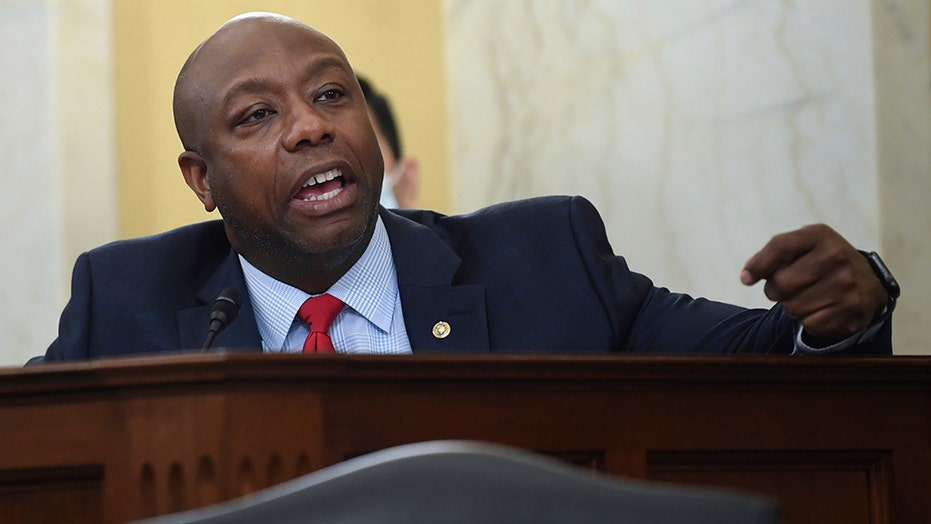 Laurie, pastor and founder of the Harvest churches in California and Hawaii and of Harvest Crusades, asked Scott about his Just and Unifying Solutions To Invigorate Communities Everywhere (Justice) Act of 2020 before it was unveiled before the Senate this week.

“I believe God has established law enforcement. I believe racism is a real problem in our country. And I think we need to talk about it. And I don't know why you have to be in one camp or the other,” said Laurie.

Scott responded, “I can be pro-law enforcement and pro-communities of color. You can be both."

Sen. Tim Scott, R-S.C., speaks during a Senate Small Business and Entrepreneurship hearing to examine implementation of Title I of the CARES Act, June 10, on Capitol Hill in Washington. (Kevin Dietsch/Pool via AP)

About his faith, Scott added, "I don't mean to be overly religious, because in my opinion, this is not about religion ... as a born again believer, I'm driven by the gospel of Jesus Christ, so I don't look for a black solution or a white solution or a blue solution. I look for a God solution."

Scott's Justice Act is a response to incidents including the death of George Floyd while in police custody on May 25. The bill includes changes to police procedures and accountability with an enhanced use-of-force database, restrictions on chokeholds, and new commissions to study law enforcement and race.

The Justice Act also includes a provision that would make lynching a federal hate crime. It would call for a study on the social status of black males, which has been supported by House Speaker Nancy Pelosi.

On Wednesday, Senate Minority Whip Dick Durbin, D-Ill., was forced to apologize to the lone black GOP senator for calling his bill "a token, half-hearted approach."

Earlier in the day, Scott responded to Durbin's comments by referring to congressional Democrats last week wearing African kente cloths while they unveiled their own version of police reform. Critics accused them of cultural appropriation.

“Y’all still wearing those kente cloths over there @SenatorDurbin?” Scott wrote on Twitter.