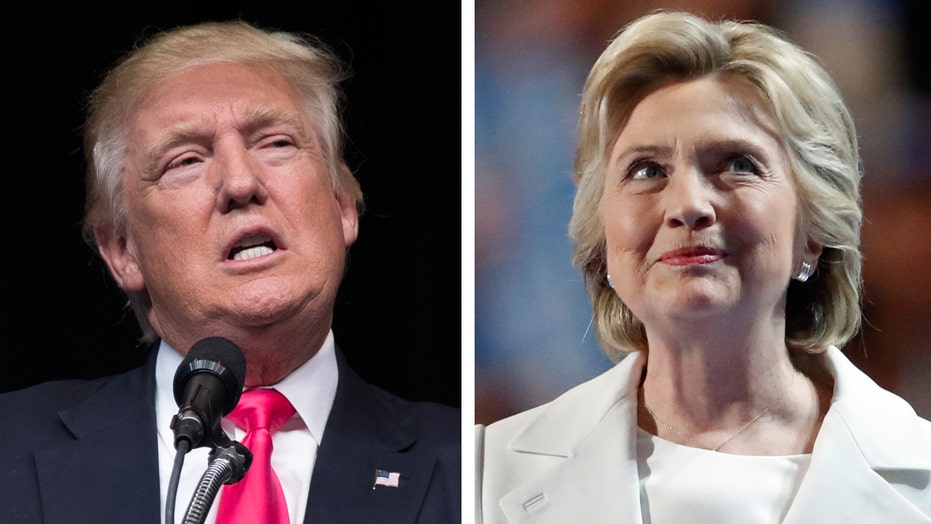 Clinton's 'risky strategy' to make 2016 race all about Trump

The battle begins — and gaining an edge in the key battleground states appears to be the strategy for both Hillary Clinton and Donald Trump as each fires an opening shot in the three-month fight to win the White House.

“As of tomorrow, we have 100 days to make our case to America,” Clinton told supporters in Philadelphia on Friday, after claiming the Democratic nomination for president.

Each campaign is hurtling out of the convention stretch drawing a stark contrast with the other, while putting in immediate face time in the swing states that will decide the November election.

On Friday, Clinton launched a bus tour with Virginia Sen. Tim Kaine that will take them across the battleground state of Pennsylvania and next into Ohio, hitting themes like manufacturing, infrastructure and small business support. The tour will take them through Rust Belt hubs like Pittsburgh and Youngstown.

Along the way, the Clinton campaign is loudly accusing Trump and running mate Mike Pence of offering a gloom-and-doom vision, what Clinton on Thursday dubbed “midnight in America.”

But Trump counters that Democrats are offering a “fantasy world” that ignores the real problems. Campaign manager Paul Manafort charged that those problems have only been exacerbated by President Obama and Clinton’s leadership.

“Because she has no message, she has to try and confuse by making these kinds of attacks,” Manafort told Fox News on Friday. “If it’s midnight in America, it’s because of the seven-and-a-half years of the Obama-Clinton administration.”

Each, however, is claiming to be the country’s true change-maker. A new Trump ad says the billionaire businessman offers “change that makes America great again” – while Clinton-Kaine say he’s offering “empty promises.”

The Clinton-Kaine ticket is taking a hard blue-collar turn as the Democratic nominee tries to reach out to working Americans, including independents and disaffected Republicans, after formally wrapping her contentious primary against Bernie Sanders this week.

The Clinton campaign plans to kick off next week with an organizing event in Omaha, Neb.

But it is states like Ohio and Pennsylvania – swing states with large swaths of blue-collar voters – that are expected to be top targets.

In Ohio, the RealClearPolitics polling average shows Clinton and Trump virtually tied, with the former secretary of state edging him by less than a percentage point. She leads by an average of 4 percentage points in Pennsylvania, though a recent Quinnipiac poll put Trump slightly ahead.

GOP vice presidential nominee Mike Pence was hitting Ohio on Friday, while Trump was hitting the Colorado battleground. While Clinton and Kaine are teaming up on the campaign trail after their convention, Trump and Pence are splitting up to cover more ground. Next week, Pence is set to travel to Nevada, Arizona, Colorado, North Carolina and Virginia.

Earlier in the day on Friday, Pence spoke in Indianapolis where he ripped Clinton’s nomination acceptance speech as “more of the same.” He blasted her for “failed policies” of increased regulation and government.

Kaine, for his part, delivered a fast-talking and folksy summation of the voters’ choice as he sees it. Introducing Clinton at their Philadelphia event Friday, he said voters can pick a “trash-talker” or a “bridge-builder.”

Manafort countered that Clinton’s push for undecided voters is confusing because she’s offering to be “an Obama third term” while simultaneously vowing to “make a change.”

“She can’t have it both ways,” he said. “There is no way she can establish that she’s the change. She is the establishment.”