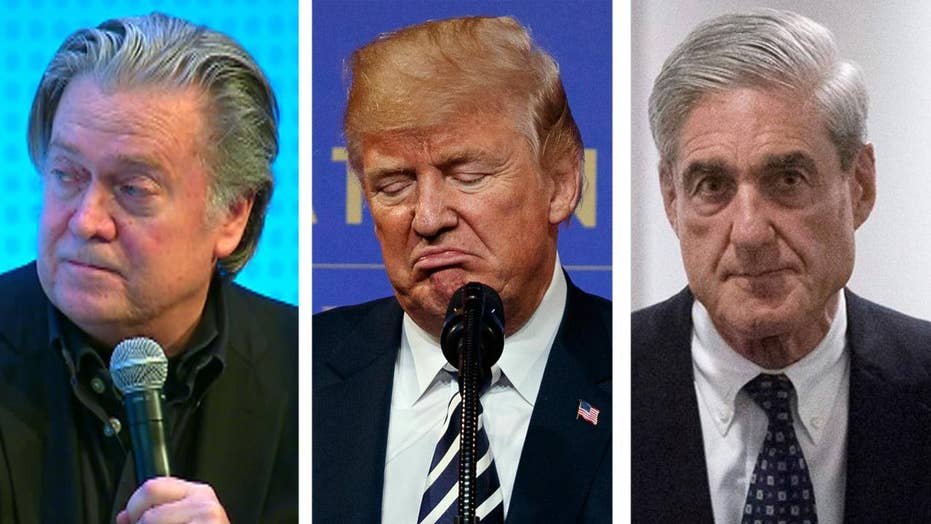 Steve Bannon, the former White House chief strategist who made an unceremonious exit from the Trump administration last year, said his old boss will bring fire and fury before long to special counsel Robert Mueller.

“I think President Trump is going to war,” Bannon said about the criminal probe into whether Trump’s Republican presidential campaign colluded with Russia, while appearing at a Financial Times Future of News panel in New York on Thursday. “He’s going to war on this.”

Bannon noted the Thursday morning resignation of John Dowd as Trump’s lead outside counsel in the Russia probe — amid an internal dispute with other attorneys on the legal team over whether the president should agree to an interview with Mueller — proves his point.

Despite their bad blood, he had considerate words for Trump. “He’s anything but a dictator, he’s a populist. How can a dictator take nine months to decide on Afghanistan?” Bannon said.

He said Trump is America’s greatest orator since William Jennings Bryan, who was known as “The Great Commoner” because of being able to speak to — not at or down at — his audience.

Bannon, who left the White House in August 2017, said Trump’s simple, plain and direct populist language during the campaign made him relatable, and won him the election.

“Here’s what won it for Trump: economic nationalism,” Bannon said.

Bannon, who served as vice president of Cambridge Analytica from June 2014 to August 2016, when he joined the Trump campaign, attempted to draw a line between the campaign and the firm. Bannon said he had no knowledge of the data mining operation and instead put the blame on Facebook, saying the social network cared more about profits than privacy.

“They take your stuff for free. They sell it and monetize it for huge margins. That’s why the companies trade for such high valuations,” Bannon said. “Then they write algorithms and control your life.”

He also stood by his comments in Michael Wolff’s “Fire and Fury” — a tell-all about the Trump administration. Trump booted him out of The White House last year over disparaging comments he made about the president’s family.

Bannon said his Wolff interviews were “authorized” by both the White House and outgoing communications director Hope Hicks.

“I haven’t seen anybody refute anything that was said in the book,” Bannon said.

Fox News’ Marta Dhanis and The Associated Press contributed to this report.