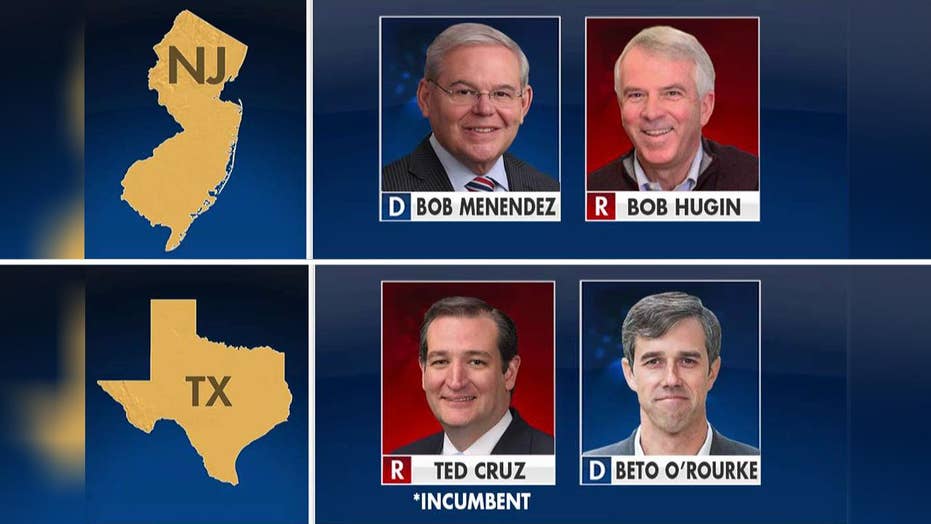 With a week to go until voters cast their midterm ballots, several longshot Senate candidates are catching up in the polls and adding another element of drama to the final stretch.

O’Rourke has benefited from intense media coverage and colossal fundraising, raking in more than $70 million since entering the race last year (compared with the $40 million Cruz has raised since 2013). Despite that attention, a number of polls have shown him to be as much as 10 points back. The Quinnipiac poll suggests O’Rourke may be more competitive as the election draws closer.

"O'Rourke is within striking distance, but time is running out in a race that Democrats have hoped would deliver an upset victory that would be key to a Senate takeover," Peter A. Brown, assistant director of the Quinnipiac University poll, said in a statement.

Meanwhile, in New Jersey, Democratic Sen. Bob Menendez is only 5 points ahead of GOP challenger Bob Hugin, according to an Emerson poll released Monday, as the Republican tries to capitalize on the incumbent's ethics problems.

Hugin has been outspending Menendez by 3-1, with the majority of money going to ads hitting Menendez. But Menendez has been given a boost by the Senate Democrats' super PAC, which announced it would move another $2.8 million to Menendez, on top of another $3 million it recently shifted to New Jersey this month in an effort to keep Menendez in office.

Menendez also was given a weak endorsement this week by the New Jersey Star-Ledger, whose editorial board told its readers to “choke it down and vote for Menendez.”

“Our hope is that voters remember that Trump is on the ballot, that they choke down their reluctance and vote for Menendez,” the board wrote. “He's no gem, but he's better than Hugin.”

“The contest isn’t about anything else but Democratic U.S. Sen. Bob Menendez and his ethics problems,” Cook Political Report’s Jennifer Duffy wrote. “The biggest threat to Menendez’s re-election is not so much Hugin than it is the voter who goes to the polls and decides to send Menendez a message, much the way many did in the primary when 38 percent voted for his unknown primary opponent.”

In addition to those races, a CBS poll released Sunday shows Republican Mike Braun ahead of Indiana incumbent Democratic Sen. Joe Donnelly by 3 points -- within the margin of error, but reflecting a more competitive race than once thought.

Meanwhile, another longshot bid, by Republican John James in Michigan, has been the subject of wildly fluctuating polls. A Detroit News poll shows the Republican hopeful 17 points behind Democratic Sen. Debbie Stabenow. This departs from other polling that showed the race tightening. An EPIC-MRA poll recently showed Stabenow with a 9-point lead, and a Mitchell Research & Communications poll showed the incumbent leading by 6 points.

James, the first black Republican to run for statewide election in Michigan in four decades, has seen support from prominent Republicans including Vice President Pence -- who traveled to Michigan to support him.

The national map still shows a favorable Senate outlook for Republicans. The Fox News Power Rankings puts 50 seats in the Republican column (including those likely or leaning Republican, and GOP seats not up for election this year), and 45 in the Democratic column. Five races are marked as "toss-ups."

On the House side, the Real Clear Politics map shows 204 House seats tilting Democratic, and 199 tilting Republican, with 32 in the “toss-up” column. Fox News’ Power Rankings similarly puts the split at 207 seats for Democrats and 197 for Republicans, and the rest up in the air. It takes 218 seats to claim a majority.