McCaskill, who has fought to portray herself as a mainstream candidate in a state President Trump won by double digits in 2016, had consistently but narrowly led in the race earlier this year. But she has come under withering attacks from Hawley that she is a "party-line liberal," especially in light of her vote against Supreme Court Associate Justice Brett Kavanaugh. Fox News currently considers the race a toss-up.

The Senate continues to be favorable turf for Republicans, according to Fox News polling and the RCP average, as the GOP benefits from a favorable map this year: Democrats are forced to defend 26 seats, including 10 in states that Trump carried. (Only a third of the 100 Senate seats are up for election every two years.)

A CBS poll released Sunday showed Republican Mike Braun ahead of incumbent Indiana Democratic Sen. Joe Donnelly by 3 points -- within the margin of error, but still a worrying sign for Donnelly as the GOP builds momentum and tries to flip his seat.

Meanwhile, on the heels of a rally hosted by Trump last week, Wisconsin Gov. Scott Walker has pulled to within striking distance of Democrat Tony Evers, with Cook Political Report now declaring the race a toss-up that might turn on Walker's superior political organization. Fox News rates the contest as lean Democrat, and RCP's polling average gives Evers a 3.6 point edge, down from 6.3 in August. High-profile Democrats have also poured into the state in recent days, as Walker continues to cut into Evers' lead.

In Alaska, independent Gov. Bill Walker, who suspended his campaign earlier this month and threw his support behind Democrat Mark Begich over Republican Mike Dunleavey, will stay on the ballot -- and Cook Political Report expects him to receive between 10 and 20 percent of the vote. The higher that number, the better for Dunleavey, who currently leads by approximately 4 points in a race Fox News classifies as a toss-up. Trump won Alaska by 14 points in 2016, but in August, The Washington Post wrote that both the Alaska and Wisconsin gubernatorial races "heavily favor" Democrats.

And in Florida, where polls have consistently shown Democrat Andrew Gillum leading Republican Ron DeSantis in the gubernatorial race by a slim margin, early voting numbers show Republican voters are turning out in greater numbers than Democrats, suggesting an enthusiasm gap. 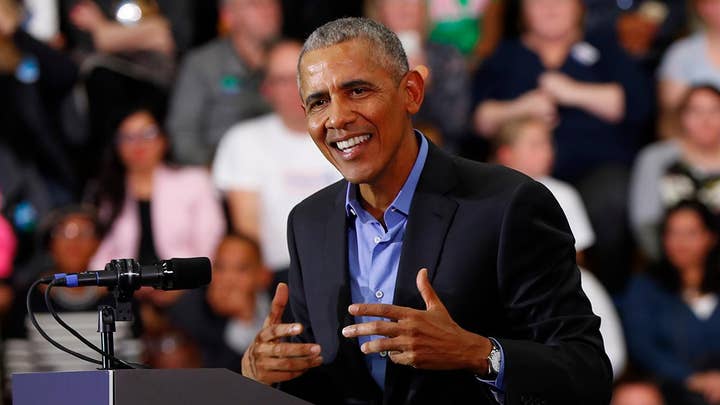 Democrats are, however, seeing surprising signs of hope in deep-red Oklahoma, where incumbent Republican Gov. Mary Fallin remains profoundly unpopular, even as Fox News ranks the race as likely Republican. Polls show Republican candidate Kevin Stitt holding onto a sizable lead over Democrat Drew Edmondson, but owing largely to baggage from Fallin's poor track record in the state since taking office in 2011, Cook Political Report assesses that the race could go either way.

Major polling metrics still paint a positive picture for Democrats in the House, where the overwhelming majority of competitive races are in GOP-held districts that went for Hillary Clinton. RCP projects that Democrats can count on winning 205 seats in the House, compared to Republicans' 199 -- meaning a whopping 31 are considered toss-ups. Fox News analysis also points to 31 toss-up seats, with 207 likely or lean Democrat and 197 likely or lean GOP.

But no trend appears inviolable with just days until the Nov. 6 midterms. In Texas, the Fort Worth Star-Telegram, which backed Mitt Romney's 2012 presidential run, as well as Republican Sens. John Cornyn and Kay Bailey Hutchison, turned heads when it announced this weekend, "Cruz does not measure up. This office needs a reset."

The editorial board continued: "Only O’Rourke seems interested in making deals or finding middle ground. That is why the El Paso Democrat would make the best senator for Tarrant County’s future, and the future of Texas." The Star-Telegram is the leading newspaper in Tarrant County, the state's third-largest county.

O'Rourke pointed to the endorsement in a tweet late Saturday, and his campaign has also advertised its support from the two largest newspapers in the state: The Houston Chronicle and the Dallas Morning News. The Chronicle endorsed Cruz in 2012, but the Dallas Morning news did not.

TEXAS SENATE RACE NOW THE MOST EXPENSIVE IN US HISTORY, TOPPING $100M

However, analysts have been tepid as to whether newspaper endorsements produce results for candidates. In 2016, Hillary Clinton received the backing of more than 90 percent of major newspaper editorial boards, including the Chronicle and the Dallas Morning News.

And polls continue to show a difficult path to victory for O'Rourke, who reaffirmed earlier this month he would vote to impeach President Trump. While the Cook Political Report rates the Texas Senate race as a toss-up, it acknowledges Cruz has an advantage in the campaign's final days.

Fox News rates the race as likely Republican, and Cruz is leading by nearly 7 points in the last RCP average, despite O'Rourke's sizable fundraising advantage. O'Rourke has raised more than $70 million since entering the race in 2017, new federal election filings show, compared to the $40 million Cruz has generated since taking office in 2013.