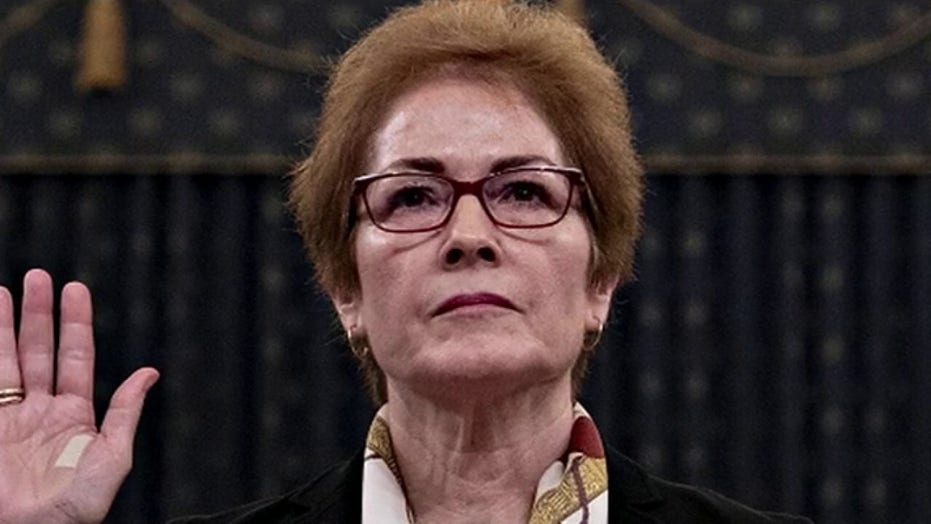 New details about what Amb. Marie Yovanovitch knew about Hunter Biden and Burisma

State Department emails obtained by the conservative group Citizens United this week indicate that the former U.S. ambassador to Ukraine was involved in discussions about the natural gas firm Burisma Holdings and even in a meeting with a company representative, despite testifying to Congress during the impeachment inquiry that she knew little about the firm.

Burisma Holdings was at the center of impeachment proceedings against President Trump, after he pressed Ukrainian President Volodymyr Zelensky during a phone call to look into the Biden family’s dealings in Ukraine. Former Vice President Joe Biden’s son, Hunter Biden, held a lucrative position on the board of Burisma Holdings.

During the impeachment hearings, many witnesses were questioned about their knowledge of the Biden-Burisma connection, and the firm's reputation in Ukraine. Former U.S. Ambassador to Ukraine Marie Yovanovitch, during House testimony last year, said she didn't have much knowledge about the firm, and noted that she only learned of its connection to Biden through "press reports" she read while preparing for her Senate confirmation hearing.

“Burisma wasn’t a big issue in the fall … of 2016, when I arrived,” she said, noting that the investigation and details surrounding its closure “happened before I arrived.”

"It was not a focus of what I was doing in that six-month period," she said.

But through a Citizens United Freedom of Information Act request for emails related to Burisma sent by former deputy assistant secretary of state for Europe and Eastern Europe George Kent, the organization obtained more than 160 pages of emails and memos sent during the fall of 2016, including communications between Yovanovitch and U.S. Embassy officials about Burisma Holdings and documents indicating that she met with a representative of the firm at the embassy in December 2016.

The documents were first reported by John Solomon.

WHAT IS BURISMA HOLDINGS?

In September 2016, Yovanovitch received a letter from Burisma’s American lawyers, John Buretta of Cravath, Swaine and Moore law firm based in New York, alerting her that prosecutor Yuriy Lutsenko’s office was dropping a corruption investigation related to Burisma without filing charges. Buretta also called allegations against the firm’s founder “baseless.”

“We respectfully request that Your Excellency take into consideration these objective facts when considering the narrative promoted by some, and no doubt to be repeated again, in disregard of the facts and the law and the decisions by courts,” Buretta wrote the ambassador.

Yovanovitch appeared to forward the email to Kent, who then arranged a briefing for her to discuss the issues. Kent, before the briefing, wrote to colleagues the topics he hoped to discuss, which included “[Burisma founder Mykola] Zlochevsky/Burisma - asset recovery and past crimes of the Yanu regime as they intersect U.S. corporate/individual interest.”

In another email, Kent wrote to Yovanovitch that the briefing was “further to the Blue Star effort to rehabilitate the reputation of their non-client in the US, former ministry of ecologies Zlochevsky, who clearly has retained the services of a blue chip law firm and his energy company Burisma, which in turn has Hunter Biden on its board.”

Yovanovitch was herself a key figure in impeachment proceedings, recalling how she was ousted from her post and allegedly targeted by Trump allies — some of whom have argued that the concerns about Burisma and the Biden connection were legitimate for the president to press Ukraine on. Trump's move to withhold U.S. aid during that period, though, is what catapulted the controversy into impeachment territory — with the president ultimately impeached by the House and then acquitted by the Senate.

Burisma's founder, former minister of ecologies Mykola Zlochevsky, had been under investigation in Ukraine. The Obama administration pushed for the prosecutor investigating Zlochevsky, Viktor Shokin, to be removed from his post. Shokin was fired in April 2016 and the case was closed by the prosecutor who replaced him, Lutsenko. Joe Biden once boasted on camera that when he was vice president he successfully pressured Ukraine to fire Shokin.

Biden allies, though, maintain that his intervention had nothing to do with his son, but was rather tied to the administration’s concerns of corruption in Ukraine. At the time, as vice president to former President Obama, Biden was running U.S.-Ukraine policy and anti-corruption campaigns.

Meanwhile, another document appeared to be a briefing memo to prepare Yovanovitch for a meeting on Dec. 8, 2016 inside the U.S. Embassy with Burisma representative Karen Tramontano.

“An Atlantic Council member and Washington veteran, Tramontano informally represents Mykola Zlochevsky, the Burisma CEO, who has long been the target of law enforcement proceedings in Ukraine,” the memo stated, adding that Zlochevsky’s “official US representatives sent a letter in September ... asking that the embassy reconsider its position on him.”

Yovanovitch did not make mention of meeting with Burisma representatives during her testimony.

“These newly uncovered documents indicate Ambassador Yovanovitch made false statements under oath during the impeachment charade and this must be thoroughly investigated,” Citizens United president David Bossie told Fox News, adding that “the American people are sick and tired of the double standard.”

Bossie called for President Trump to order the release of records related to impeachment, Burisma and Hunter Biden:

"The records that Citizens United pried loose through our ongoing FOIA litigation are sitting in the State Department.  President Trump should order the release of all records relating to impeachment, Burisma and Hunter Biden that are in the possession of the State Department. The American people have a right to know about the corruption that took place in Ukraine during the Obama-Biden Administration."

Fox News has reached out to Yovanovitch's attorneys with a request for comment.

Meanwhile, in Ukraine, the Burisma investigation isn't entirely closed. In October 2019, Ukraine’s current prosecutor general, Ruslan Ryaboshapka, said at a news conference that his office was instructed to review cases that have been closed to make sure they were fairly and thoroughly handled — including the probe into Burisma. That announcement did not mean that Ukraine was opening a new investigation into Burisma or the Bidens.

During his testimony last year, Kent said that he raised concerns with Biden's office in 2015 that Hunter Biden’s role on the board of Burisma could present “the possibility of the perception of a conflict of interest.”

Kent also testified during the impeachment hearings that he would “love” to see Ukraine look into the circumstances surrounding the closure of the probe tied to Burisma.